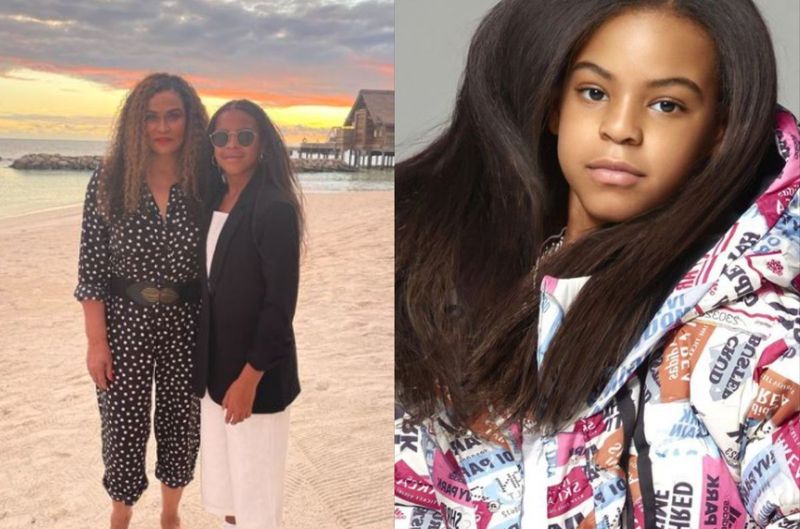 Blue Ivy Carter, the first child of Beyoncé Knowles and Shawn ‘JayZ’ Carter, is growing up before our eyes. The eleven-year-old is nearly as tall as her grandma, Tina Knowles-Lawson. In a 7 January Instagram birthday post, the daughter of a wildly popular artist was praised by her chic grandmother.

TINA KNOWLES-LAWSON PENS HEARTFELF BIRTHDAY MESSAGE TO BLUE IVY
Knowles-Lawson shared a photo of herself with Beyoncé’s first grandchild that was taken on a secret, secluded beach. The beautiful grandmother praised Blue Ivy’s unique personality in her blog post, stating,

“Your birth was one of the greatest moments of my life. I prayed and urged your mother to deliver you on January 4, which is my birthday. I really wanted you to share my birthday, but you decided to arrive on January 7, three days after my actual birthday, much like your aunt Solo.

“Knowing you and your personality now, I realize that you required your own day because you were such a queen and are so exceptional,” Knowles-Lawson continued.

“REALLY, THERE IS NOTHING YOU CANNOT DO”: BLUE IVY RESPECTED FOR NUMEROUS TALENTS
The daughter of Beyoncé and Jay-Z is a well-rounded young lady. Her grandma expressed her admiration for her granddaughter’s many capabilities as she shared uncommon facts about Blue Ivy’s unique abilities and wrote,

“You can sing, dance, play basketball, volleyball, paint, draw, sculpt, sew, compose, act, and play the piano! I could go on forever. Because there is literally nothing you cannot accomplish.”

LOOKS, BRAINS, HUMOUR AND GRACE: WHAT TINA KNOWLES-LAWSON REALLY SEES IN BLUE IV
In the post, Carter’s first daughter, Blue Ivy, was commended for not only being as beautiful as her famous pop singer mother, but also for possessing her mother’s charismatic personality and grace. The Carters’ first child was adored by her grandmother, who wrote a poem about her.

“You are witty, gorgeous, graceful, and very intelligent. Ms. Blue Ivy Carter is the best grandchild I could ask for! I could not be more fortunate, appreciative, or utterly in love with another human being. You definitely make me happy! ❤️❤️❤️ Grandma T.”