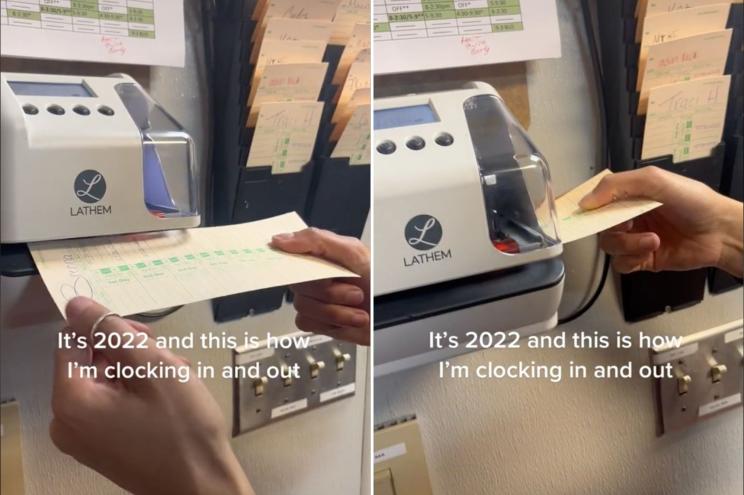 A viral TikTok video reveals that employee punch time clocks are still in use in some workplaces, providing social media users with a blast from the past.

Cadence Nicole, a Maryland-based TikTok user, uploaded a video of the wall-mounted punch clock allegedly used at her workplace.

TikTok user, Cadence Nicole, shared a video of the punch clock she uses at work.

The six-second video depicts two hands inserting a timecard into a punch clock.

The video, which was initially released on October 28 and has had more than 2.1 million views and 73,500 likes, has gone viral.

Hundreds of commenters have shared their punch clock memories, experiences, and thoughts on work-hour recording methods in response to the post.

Another user commented, “As a payroll administrator, I would definitely quit if I had to manually add everyone’s hours this way.”

“I once resigned a job without notice because I couldn’t figure out how to utilize this,” stated one user.

Some users of TikTok saw punch clocks with optimism.

“Baby, you guys are so much superior than us that we had to physically write it down,” stated one user.

“That would be preferable to having to clock out on a computer,” remarked another user.

Some users stated that they still employ the punch-clock system.

Fingerprint scanners and landline call-ins are additional time-recording methods that have been discussed in the comments section.

In the 1880s, Bundy reportedly invented the mechanical punch clock, for which he was granted a patent in 1888.

National Today, a national holiday calendar, notes that the invention of the punch clock is commemorated annually on January 27 as “Punch The Clock Day.”