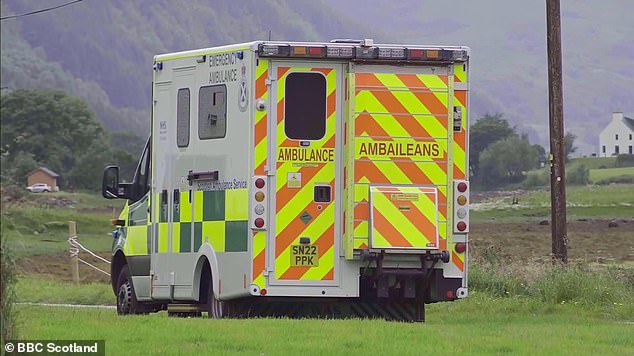 Today’s gun rampage in the Scottish Highlands claimed the life of one man and wounded three others.

The 47-year-old male was discovered dead at a residence on the Isle of Skye this morning, less than an hour after cops were summoned to a neighboring property for reports of a critically wounded lady.

Police subsequently discovered a man and a woman injured at a home in Dornie, a 40-minute drive away on the Scottish mainland, and have said that they think the events are connected.

In connection with the occurrences, a 39-year-old male was detained and sent to the hospital.

Although police have not verified the nature of the events, the local MP has said that ‘weapons and knives’ were involved.

At 9 a.m., reports of a wounded lady at a home in the Tarskavaig part of the island prompted the deployment of dozens of police vehicles and the force helicopter to the isolated Scottish region, which is a tourist destination.

Inside, they discovered a 32-year-old lady who had been gravely hurt and was rushed to Glasgow’s Queen Elizabeth University Hospital for treatment.

Following another weapon discharge, emergency personnel were sent to a residence in the Dornie district of Wester Ross, on the Scottish mainland.

A man was critically hurt and was brought to Raigmore Hospital in Inverness, while a lady was transferred to Broadford Hospital on Skye.

What happened during this morning’s rampage
little before 9 a.m.

Following allegations of an injured lady, police were sent to a residence in the Tarskavaig area, a secluded spot in the southern section of the Isle of Skye.

Officers discovered a 32-year-old lady who was critically wounded and taken to a hospital in Glasgow for treatment.

Following reports of a weapon discharge, emergency personnel were sent to a residence in Teangue, which is less than a 20-minute drive from Tarskavaig.

When they arrived, they discovered a 47-year-old male who had been declared deceased at the spot.

Later that morning, on Wednesday,

Following allegations of a weapon being fired, police were summoned to a property in the Dornie district of Wester Ross.

When they arrived, they discovered a critically wounded guy and an injured lady.

The guy was evacuated to Inverness Hospital, while the lady was transferred to Skye Hospital.

An arrest has been made.

A 39-year-old guy was eventually detained in connection with all three crimes.

He was brought to Inverness Hospital for treatment of undisclosed injuries.

According to police, a 39-year-old male detained in connection with all three crimes was also transported to Raigmore Hospital.

Chief Superintendent Conrad Trickett, the Highlands and Islands Division’s local police commander, said: ‘Incidents like this are luckily quite unusual, but I appreciate that it will have a considerable impact on the local population in these isolated regions.’

‘I’d want to reassure folks that we are assessing these instances as isolated incidents with no larger public risk.’

‘Over the coming days, there will be a large police presence in the area, and we will be working with partners to give assistance to the local community.’ I’d want to thank everyone for their help while our inquiry continues.’

Earlier today, Ian Blackford, SNP MP for Ross, Skye, and Lochaber, said that he had been informed that “there is one death.”

‘This is horrible and frightening news, particularly for a location like Skye and Lochalsh,’ he added.

‘I was brought up to date on the incidents, and I believe a pistol and knives were involved.’ According to reports, one person has died and three others have been wounded.

‘Firearm rules are in place for a purpose, and this occurrence must be reviewed to see if any lessons can be drawn from it.’

‘I’d want to thank the emergency services, especially the police and the Scottish Ambulance Service, as well as the local government.’ ‘I believe the problem is under control.’

Kate Forbes, MSP for Skye, Lochaber & Badenoch, termed the news as “one of the darkest days in Skye and Lochalsh history.”

‘I cannot image what the family and friends of those who have lost a loved one are going through,’ she added, adding that they should be in all of our thoughts and prayers right now.

‘We are a close-knit community, friendly and hospitable, and this will destroy us to our core.’

‘It seems like our hearts have been torn out.’ I, like many others, had no idea such a terrible day would occur.’ On Wednesday morning, a dozen police vehicles, including armed response units and the force helicopter, were sent to the location.

Locals have stated that the suspect used a knife and a handgun in a series of assaults, although police have yet to corroborate this.

‘Stabbing in Sleat, then shotgun used in Dornie,’ one neighbor recalled at the time. The victim is on route to the hospital.

‘This comes from a resident of Dornie. I’m not sure whether the criminal has been apprehended yet.’ Police have characterized the incident as ‘controlled’ after the man’s detention.

‘We were made aware of a lady wounded at a residence in the Tarskavaig region of Skye just before 9am on Wednesday, August 10,’ said a Police Scotland spokeswoman this afternoon.

‘Police are also responding to two further occurrences in Teangue on Skye and Dornie, which are being investigated.’

In connection with the occurrences, a 39-year-old male was detained. At this point, we feel the incident has been controlled and that there is no danger to the larger community.

‘Enquiries are still being conducted.’

‘We are grateful to our emergency services colleagues for putting this extremely severe and horrific situation to an end,’ said Bill Lobban, convener of the Highland Council.

‘We will assist the community and our partners in every manner that we can.’

‘These occurrences will shock and sadden the communities of Skye and Dornie, and our sympathies are with the persons impacted.’

Skye receives 500,000 people every year due to natural attractions such as The Fairy Pools and The Old Man of Storr.