Skip to content
Go Home «» News «» World News «» Three people and a dog were killed in a hotel fire in Perth, and guests were evacuated as 999 personnel raced to the scene 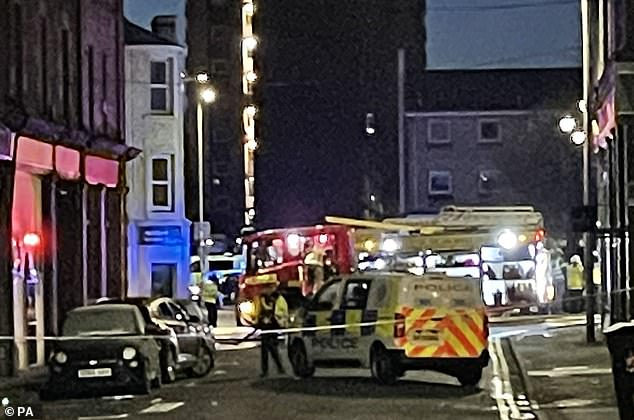 Police Scotland has confirmed that three people and a dog perished in a hotel fire in Perth, with 999 responders hurrying to the site after the fire broke out.

This morning, shortly before 5:10 a.m., emergency personnel were dispatched to the three-star New County Hotel on County Place in response to a fire alarm.

The Scottish Ambulance Service treated a number of persons for minor injuries while confirming the deaths of three individuals at the scene.

Guests of the hotel and two residents of a nearby apartment complex were evacuated and are being assisted.

At the site of a fire at the New County Hotel in Perth were emergency services.

This morning, emergency services rushed to the scene and cordoned off roads.

Mr. Swinney, MSP for Perthshire North, tweeted, “My condolences to everyone impacted by this tragedy.”

Douglas Ross, leader of the Scottish Conservatives, MP for Moray, and MSP for the Highlands and Islands, tweeted, “Absolutely heartbreaking to learn that three persons perished in a hotel fire in Perth. What a sad beginning to 2023!

My thoughts are with the loved ones of the deceased.

As always, we appreciate our emergency services’ prompt response to unfortunate events.

This morning, shortly before 5:10 a.m., emergency personnel responded to a fire call.

Evacuated hotel guests and two residents of a nearby apartment building are being assisted.

Pete Wishart, a local representative, described the incident as “just terrible news at the beginning of the year when so many people are out celebrating.”

Mr. Wishart, who represents Perth and North Perthshire, adding, “My sympathies are with the victims’ relatives and friends.”

When the news broke, we all prayed that everyone would be accounted for and survive. This is the last thing anyone anticipated.

“I am certain that the people of Perth will be horrified by this news and wish to send their sincere condolences to everyone affected by this tragedy.

Can I also thank the emergency personnel who responded in such large numbers?

The Scottish Fire and Rescue Service (SFRS) stated that nine apparatus had been dispatched to the scene.

There are road closures in the vicinity while emergency personnel respond to the event.

Chief Superintendent Phil Davison stated, “Our sympathies are with the families and loved ones of those who have passed away during this extremely terrible time for everyone.”

Officers are conducting a combined investigation with the Scottish Fire and Rescue Service to determine the complete circumstances surrounding this incident.

A police perimeter has been established, and the public is requested to avoid the area.

At 5:02 a.m., the Scottish Fire and Rescue Service (SFRS) reported that it had dispatched nine fire engines to the scene.

A SFRS representative stated, “We are now assisting emergency service partners at a commercial building fire in County Place, Perth.”

A representative for the Scottish Ambulance Service stated, “We received a call at 05:05 from the Scottish Fire and Rescue Service about a fire at the New County Hotel in Perth.”

Our first resource arrived at the area at 5:12 a.m. with a total of 21 personnel, including a special operation resource team.

The New County Hotel, which was available to the public, has a TripAdvisor rating of 3.5 for ‘Very good’

»Three people and a dog were killed in a hotel fire in Perth, and guests were evacuated as 999 personnel raced to the scene«