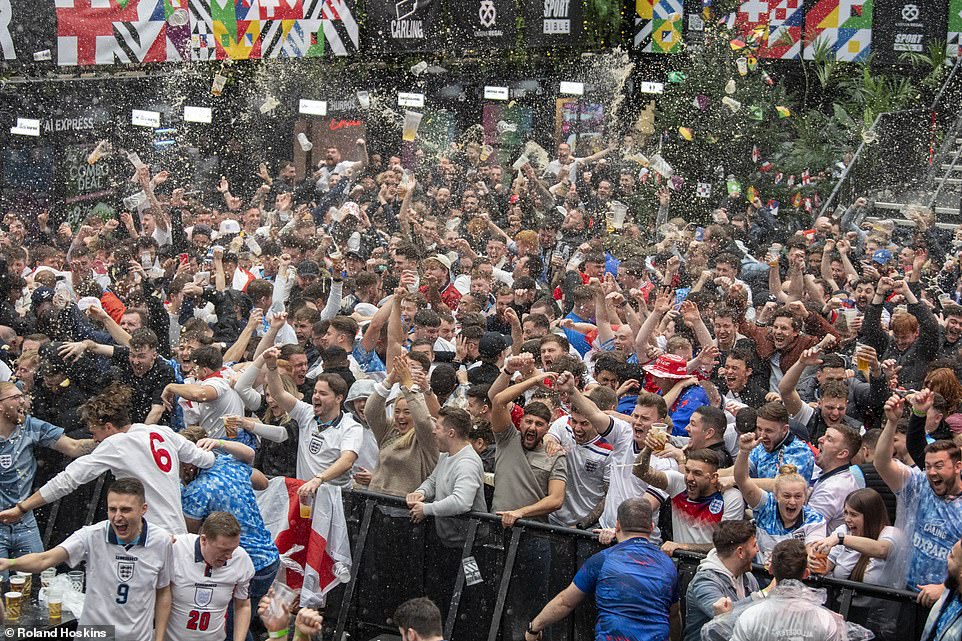 England supporters in pubs, fan parks, and houses around the country are ecstatic following the Three Lions’ 3-0 first-half lead over Iran in their opening World Cup match.

Millions of supporters have flocked to pubs and fan parks throughout the country after taking the day off work or calling in sick to see Gareth Southgate’s team play this afternoon. The nation has ground to a halt to watch the match.

Many England fans were unable to witness today’s highly anticipated match due to the 1pm kickoff, but the majority of the country’s workforce is out of the office and riveted to televisions.

Some schools’rearranged’ or canceled classes to allow students to watch the event, while traffic levels were reduced in some locations, including London and Birmingham, as employees who were still employed preferred to work from home.

According to a YouGov poll, up to 11 million people were predicted to call in sick to watch the event, and supporters have been spotted swarming pubs around the country with pints in hand.

Additionally, more than one in ten intend to watch England’s opening match during work hours without their employer’s knowledge.

Meanwhile, streets around Windsor and Bristol were desolate, with London and Birmingham also experiencing a major decrease in traffic.

67 percent of the capital’s roads were congested at 8 a.m., down from 75 percent at the same time last week.

Other cities with a decrease in traffic were Birmingham (from 73% to 59%) and Manchester (down from 73 per cent to 69 per cent).

John Goldman, a painter and decorator, admitted to performing a “sickie” to see the game. He traveled from his house in Thurrock, Essex, to a FIFA-sponsored event in central London that required tickets.

With his wife Lianne by his side and both wearing England shirts, they could not wait for the afternoon match to begin.

John stated, “I was supposed to be working, but I came here instead.” Since I am self-employed, no one can reprimand me. Even if I had a job, I would have canceled the appointment. I simply desired to watch football.

His wife Lianne stated that she had taken a day off from her administrative position to accompany him.

She stated, “We would not want to miss this.”

Fans waited in line to enter the fan festival at the underground Ourternet facility on Tottenham Court Road in central London.

Fans were handed a voucher for a free Budweiser drink and a sun hat.

Dozens of security personnel ensured that there was no indication of unrest. Only those with pre-purchased tickets and wristbands were permitted to enter the cavernous space three levels below the street.

Sam Higgs and James Crow, both 28 years old, took time off work to attend the event. The pair, who are avid England fans, hoped that once the game began, all the politics surrounding the event would be forgotten.

Sam of Milton Keynes, Buckinghamshire, stated, “All we want to do is watch football.” The athletes should not participate in politics. Qatar was awarded the World Cup 12 years ago, so it is absurd that it is still being contested today.

Fans also waited in line before 9 a.m. to enter the Box Park venue in Shoreditch so that they could experience the atmosphere as early as possible.

This morning, when the popular venue opened its doors, Callum Rowe, Jon Dunne, and Kyle Brown were among the first patrons to enter.

The 750-person capacity venue sold out of tickets last night; an additional 35 were made available at 10:30 this morning.

The buddies, who have all taken the day off to attend the match, expressed their eagerness for the Three Lions to begin their World Cup campaign.

Jon, age 35, told MailOnline, ‘It’s a little strange that the event is held in the winter. We should be in a beer garden, not inside watching the game in the dark and rain.

Now, though, we cannot wait to watch the football and will be cheering for England, ideally all the way to the championship game.

Female fans Jess and Alex were outnumbered by males one hundred to one, yet the atmosphere is enjoyable.

Jess, 27 years old, told MailOnline, “I took the day off to support for England.” My supervisor praised my work in sports development and said he was pleased with me. One must support one’s team. Come On Britain! The score will be 5-1 for England!

She said, “The World Cup being held in Qatar is not ideal for many reasons, but I’ve been there for work and the people are great.”

Alex, age 28, stated, “Watching the game on a Monday during lunch is an excellent reason to take a drink! I say it’s going to be 2-0 to England.

It’s not ideal that it’s being held in Qatar, but football is highly popular in the Middle East, where I’ve traveled for work.

Nearly 1,400 spectators crowded a massive tent at the Newcastle Fan Zone to watch the action.

By 12:45 p.m., 2,000 pints had already been consumed by England fans, many of whom were wearing Alan Shearer-emblazoned grey shirts from the Euro 1996 tournament.

Tom Brodie, a 28-year-old bartender, estimated that 115 kegs, which contain 82 pints apiece, would be consumed today. I’ve just ordered 20 additional kegs of Stella in order to avoid running out.

Everyone is in a cheerful mood. No one is concerned by the fact that it is Monday at noon. It feels like Friday night inside.”

Crowds applauded Peter Beardsley as he talked on stage about his desire for England to win the World Cup.

Ben Panzetta, 19, a student at Newcastle University, stated, “I have four economics classes today, but I’m skipping them. England is usually first, therefore I could not have missed this.”

Johnny Lawler, a 24-year-old bank employee, admitted: “I’m supposed to be at work, but I spent the entire weekend pleading with someone to cover my shift.

Otherwise, I probably would have called in sick.

A DJ played an England-themed mix before the game, which included World In Motion, Three Lions (on a shirt), and Fat Les’s famous Vindaloo.

Despite the unique timing of the World Cup, around one-fourth of supporters want to watch the event in a pub or bar, and nine million pints of beer are predicted to be consumed as Wales open their campaign today.

Debbie Porter, the managing director of Destination Digital Marketing, stated that her children’s school had “rearranged” its typical schedule to prevent students and teachers from phoning in sick.

She stated, “My children’s school has completely altered the school day today, presumably in an effort to keep their absenteeism percentages within the OFSTED-mandated level.”

We have the technological capability to record the game and view it a few hours later, so I don’t understand why we shouldn’t expect people to grow up a bit and delay their gratification till the evening. This applies to employees and students alike.

Sam Alsop-Hall, the chief strategy officer of the recruitment agency Woodrow Mercer Healthcare, stated that he provided his colleagues with a “extended lunch” so they could watch the full game.

He stated, “Today is the first game of the season, and we’ve told the squad that if they arrive an hour early, they may have an extended lunch to watch the game.” Our only other rule is to not return half-cut, but the World Cup only occurs every four years, so let’s enjoy it.