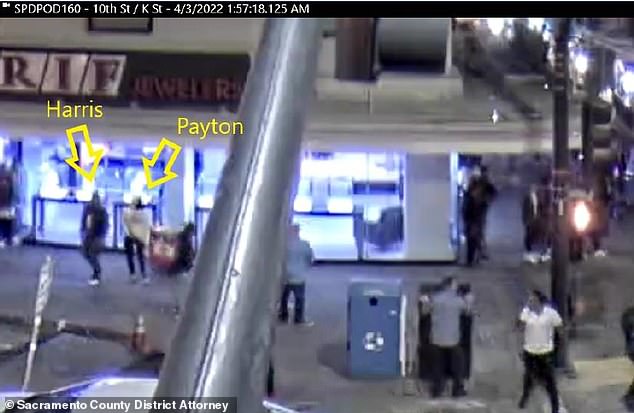 Three gang members have been charged with murder after a shootout on a busy Sacramento street left six people dead, including three women who were in the area.

Brothers Smiley, 27, and Dandrae Martin, 26, are accused of shooting four of the people who died in the gun battle in the early hours of Sunday, April 3.

Rival gangbanger Mtula Payton was part of a group that killed the remaining two victims, prosecutors say. He fled the scene in a white Chevrolet Equinox and is still on the run.

More than 100 rounds were fired during the minute-long shooting as terrified late-night revelers fled the scene.

One of the men killed was a friend of Smiley Martin. Hours before the shooting, the two had filmed a video at an apartment complex in rival territory in which they ‘discussed going to downtown Sacramento while armed to loiter outside nightclubs,’ prosecutors say.

The shooting was allegedly part of a rivalry between the Garden Blocc Crips gang, which the Martins belong to, and G-Mobb, which Payton is part of.

Three gang members were killed, but the murder charges don’t account for their deaths as California law states all parties in a gun battle are responsible for the death of bystanders.

The massacre remains this year’s deadliest mass shooting in the US, the Los Angeles Times reports.

The Martin brothers and Payton face allegations of ‘special circumstances’ that could make them eligible for the death penalty, though the practice is basically illegal in the state after years of court challenges ended with Gov. Gavin Newsom issuing an executive order halting the death penalty in 2019.

Davis was homeless. She was found in a tent camp about a block away.

It all started at around 1.57am when 70 to 80 people gathered on the northeast corner of 10th and K streets, a mere block from the state capitol building.

The Martin brothers and Lucchesi were standing on the corner. A witness said Smiley Martin made a reference to his gang.

One of them raised his right arm parallel to the ground and pointing north, prosecutors said based on surveillance video that was described in a 46-page arrest warrant filed in Sacramento Superior Court on Tuesday.

A group of men, including third murder suspect Mtula Payton, began walking slowly toward the Martins and Lucchesi.

A witness aid Payton pulled up his sweatshirt to reveal a handgun in his waistband.

The crowd started running away. A hot dog vendor abandoned his car on the street, according to the Los Angeles Times.

A minute later, Sergio Harris joined Turner and Payton as the groups prepared to attack.

A witness said Smiley Martin confronted him. ‘Everybody’s coming out of District 30 going towards London. Walking down the street. Dude, was like, “What’s you staring at? Is there a problem?'”

‘The only thing I heard is MOB this and MOB that and everybody was scattering.’

Less than 20 seconds after that, Smiley Martin turned to face the group. He was recorded holding a handgun with an extended magazine by his leg.

The shooting broke out 15 seconds later. More than 100 shots were fired, prosecutors say.

The shooting itself appears to have lasted just one minute.