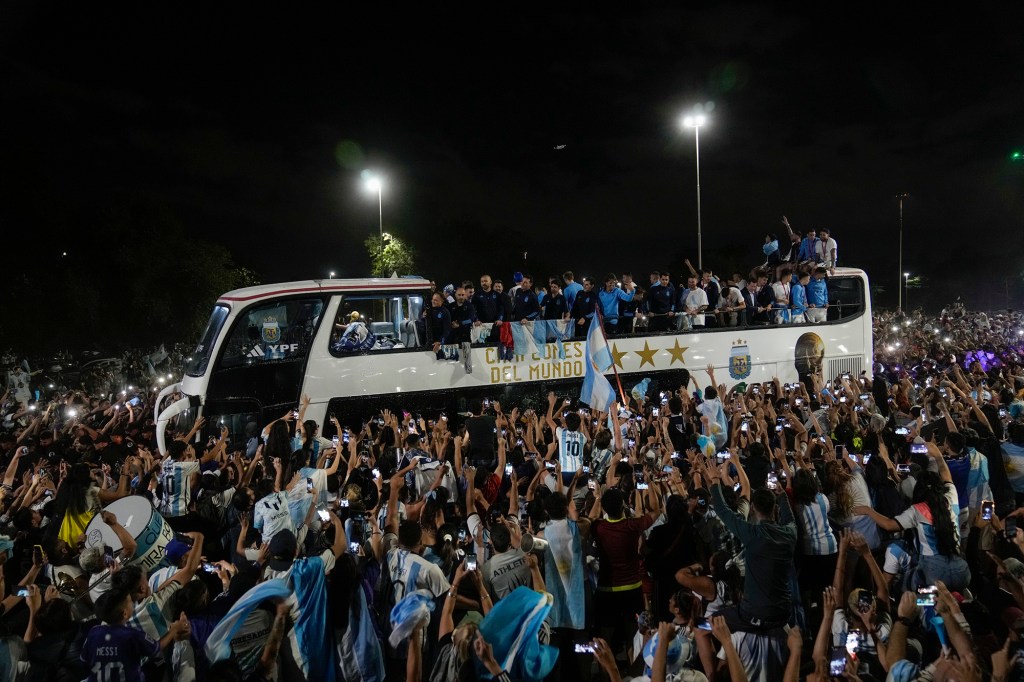 Thousands of people queued up in the middle of the night in an attempt to get a sight of the Argentina soccer team, who had just won one of the greatest World Cup finals in history, before to Buenos Aires’ planned day of festivities.

The team, lead by captain Lionel Messi, disembarked from the aircraft at Ezeiza, just outside Argentina’s capital, soon before 3 a.m. local time on Tuesday onto a red carpet that had been laid out for them.

Messi was the first player to exit the aircraft carrying the World Cup, accompanied by coach Lionel Scaloni, who threw his arm around the captain as they passed a placard that said “Thank you, champions.”

The players were greeted by rock band La Mosca performing “Muchachos,” a song penned by a fan to the tune of a previous song by the band that became an unofficial anthem for Argentine supporters during the 2014 World Cup in Qatar.

The recently crowned world champions boarded an open-top bus, and some of them, including Lionel Messi, could be heard chanting “Muchachos” as they waited for the rest of their teammates to join so they could journey to the offices of the Argentine Football Association.

On a highway, supporters, many of them were waving Argentine flags, surrounded the bus, anxious to get a sight of the players, while law enforcement agents attempted to keep them at away.

Messi maintained his focus on the World Cup during the journey, while players waved to supporters and often sung along.

The bus travelled around 11 kilometres (6.8 miles) from the airport to the AFA offices, where the players were greeted with fireworks, in about an hour.

They will sleep for a few hours at the offices of the Argentine Football Association before taking a bus to the Obelisk, the famous Buenos Aires landmark that was a sea of people Sunday afternoon when the team won its third World Cup and first since 1986.

Tuesday was proclaimed a national holiday by President Alberto Fernández so that the people may celebrate the win.

The day after the triumph on Sunday converted the streets of Argentina into enormous celebrations, many kept a careful watch on the aircraft that returned the players home to celebrate. As the jet approached Argentine territory, about two hundred thousand people tracked its progress online, and news stations broadcasted live footage of the arrival.

People began coming to the airport and AFA offices in the afternoon in hopes of catching a sight of the players.

Many were also there at the Obelisk, evidently prepared to spend the night there in order to secure an excellent location for Tuesday’s events.

Several players shared images of the flight on social media.

Messi carried the World Cup on board the aircraft. Nicolás Tagliafico, meanwhile, uploaded a picture of the World Cup seated on an aircraft seat as if it were a normal passenger.

According to Security Minister Anbal Fernández, there were no formal preparations for him or any other political figures to participate in the festivities as of early Tuesday morning, despite previous speculations that the players would head to Government House, which was offered for the celebrations.

The World Cup and the success of Messi’s team have delivered much-needed good news to a country that has been mired in economic stagnation for years, has one of the worst inflation rates in the world, and where almost four out of ten people live in poverty.

Fernández retweeted a number of congratulatory tweets following the World Cup triumph, including one from Russian President Vladimir Putin.

After a phone call with the Russian leader, Fernández wrote on Twitter, “Thank you for this greeting President Putin.” “Let the happiness that today unites Argentina with so many countries in the world serve as an example: Our societies need unity and peace.”