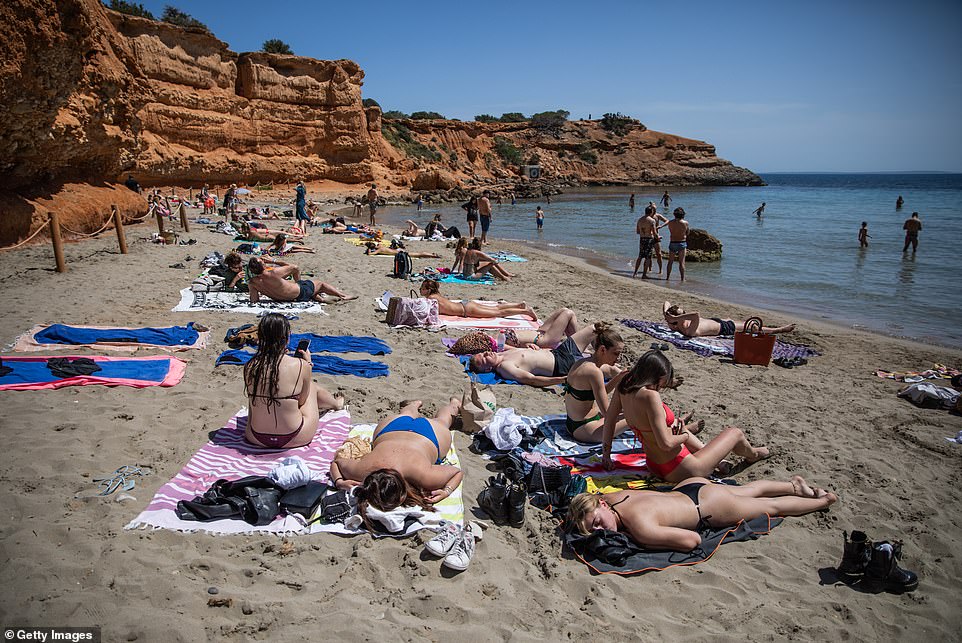 Thousands of delighted Britons have now arrived in sunny Ibiza to escape the ‘mixed bag of spring weather’ in the UK for the May Bank Holiday.

The British tourists soaked up the sun on beaches, danced the night away in nightclubs and indulged in the odd glass of sangria.

The Spanish Mediterranean island, summer outpost for major European nightclubs, is preparing for the first summer season since the Covid-19 pandemic forced the island to close down.

Ibiza’s opening parties, including Pacha, O Beach and Defected Ibiza, normally kick-off at the start of May, with the season lasting until September.

Meanwhile, Spanish officials have sparked outrage by enforcing a ‘six drinks a day’ rule for all-inclusive holidays and in resorts on islands including Ibiza and Majorca.

The new law, which affects some hotels in the Balearic Islands, means that holidaymakers are forced to pay extra if they want more than three free alcoholic drinks per meal.

Spanish officials first announced the new law in January but its has caught out hundreds of British holiday-makers who are now arriving in the islands.

Local authorities in Spain introduced the booze ban in January this year, which affects certain resort areas of the Balearic Islands, including Palma, Ibiza and Magaluf.

The new law – which states ‘alcoholic drinks will be limited to six per day’ – is part of a package of measures designed to crack down on anti-social behaviour.

These also believed to include bans on pub crawls, happy hours and two-for-one drinks offers, which are all being enforced by hefty fines.

Holidaymakers writing on social media have reacted furiously to the new laws, which many feel have not been widely publicised.

One Twitter user believed that inclusive holidays with booze limits should be marketed as ‘half-board’ – and called for hotel contracts where this wasn’t clearly stated to be ripped up.

He said: ‘Brits will now be restricted to just six drinks a day, which can only be accessed alongside their lunch and dinner – offering them a mere three drinks per meal.

‘[That’s] usually referred to as “Half Board Plus”. It’s time to cancel the hotel contracts for All Inclusive basis.’

A spokesperson for the ABTA – The Travel Association said the rules have the potential to cause ‘confusion’ among holidaymakers.

They said: ‘ABTA strongly supports initiatives that improve the health and safety of holidaymakers, as well as the welfare of local communities.

‘Some of the measures introduced by the Balearic Islands authorities to limit anti-social behaviour have potential to cause confusion for UK holidaymakers.

‘We welcome the recent clarification from the authorities, including that the restrictions will only apply to certain limited areas in Mallorca and Ibiza rather than the whole of the Balearics as originally proposed.

‘ABTA will continue to engage with the Balearic Islands Government, ABTA Members and other parties, to encourage clear communication and exchange of information, in order to ensure holidaymakers travelling to hotels in the designated areas enjoy a positive customer experience.’

Travel operator Thomas Cook recently alerted their customers to the crack down on free booze through an email.

They said: ‘Please be advised that a decree has been issued by the Balearic Government on a new restriction for All Inclusive meal option.

‘There is a maximum of six alcoholic drinks per person per day that can be served and these drinks will be provided only during lunch and dinner (three each).

‘Please be aware that Magalluf, El Arenal, Playa de Palma in Mallorca and Sant Antoni in Ibiza, there is new restriction on All Inclusive.’