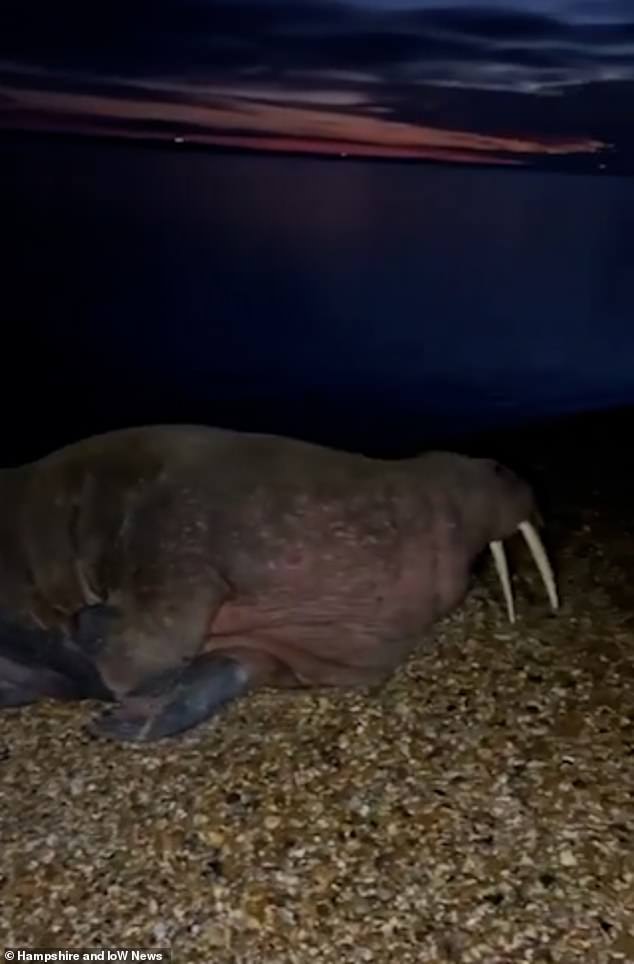 A group of British tourists who saw Thor the walrus lying on a beach captured the incident on camera.

Early on Sunday morning, the gang discovered Thor on Hampshire’s Calshot Beach. They were approaching him while filming him.

The walrus, however, seems to have gotten a bit too near since it grunted loudly, causing the group to retreat.

Fisherman Darren Mckell said spotting the marine animal was a “double-take moment” despite the fact that it seemed to be telling the group to leave him alone.

Around 6.50am on Sunday, Mr. Mckell, his wife Caroline, and son Luke were out when they saw the “huge lump” close to the Solent river.

The gang approached Thor who was relaxing by the sea with a phone camera in hand.

The trio, though, seemed to be a menace to Thor, who grunted aloud when they approached too closely.

Thor was left on the beach by the group as they seemed to go away.

Thor was protected by crews from the Calshot station of the Royal National Lifeboat Institution and Marine rescuer advisers who were dispatched to the incident.

According to Hampshire And Iow News, the walrus remained almost six hours on the beach before going on to the Artic Circle.

While Thor “slept,” visitors were reportedly “respectful and maintained their distance.”

Walruses seldom go thus far south since they typically dwell in and near the Arctic Circle.

After learning about Thor, Mr. Mckell remembered that it was “unbelievable and such a shock.”

“At first, I believed it was a seal, but as I came closer, I realized it was a walrus because of its size.

“To witness anything like that, particularly in these seas, was really fantastic.” I was unaware of how unusual it was to encounter a walrus in this area.

It was beautiful to behold, but it was also unexpected. Since walruses don’t often inhabit these regions, I’ve never seen one in the wild.

“It was a double-take moment seeing the walrus.”

According to Hampshire And Iow News, Thor was seen in the UK twice before Mr. Mckell saw him on Calshot beach.

According to reports, he was seen in Dover on Wednesday and Chichester Harbour on Saturday.

Thor was discovered in the Netherlands on November 6 and had been traveling around the French coast as far as Brittany in recent weeks before his exploits in Britain.

According to wildlife specialists, walruses travel great distances and pause for rests to recharge and rebuild energy before continuing.

Wally and Freya, two walruses, traveled to South Wales and the Isles of Scilly, respectively, while Wally traveled to Northumberland and Shetland.

»Thor growls at fisherman who came ‘too near’«