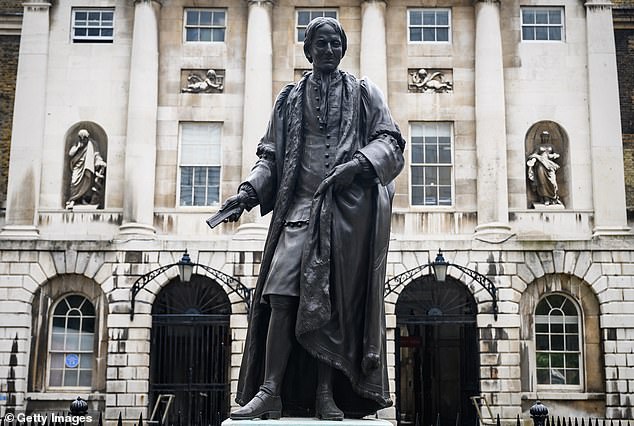 A statue of the founder of Guy’s Hospital in London is finally accessible to the public after being concealed for more than two years due to protests inspired by Black Lives Matter.

Following the toppling of Edward Colston’s statue in Bristol in 2020, the statue of Thomas Guy was concealed.

Now that the hoarding has been removed, a temporary notice detailing the publisher’s and member of parliament’s ties to the slave trade has been placed adjacent to it.

The sign reads, “a portion of his fortune was derived through investments in the South Sea Company, which was directly involved in the slave trade.”

Last year, Guy’s Hospital charity was accused of “cultural vandalism” after announcing that it would transfer a statue to a “less prominent spot”; nevertheless, it looks that the statue will remain in its current location.

It was determined that a second statue of Robert Clayton, a member of the Royal African Company that sold African slaves to the Americas, should not be prominently displayed in front of St. Thomas’ hospital.

Both hospitals are affiliated with the same trust.

After fencing was erected around the statue of Sir Thomas Guy outside Guy’s Hospital, it will be visible to the public for the first time since 2020. (pictured before boards were put up)

Due of his ties to the slave trade, the statue was concealed from public view following criticism from Black Lives Matter-inspired rallies.

Outside of St. Thomas’ hospital, the statue of Sir Robert Clayton was similarly boarded up.

The collapse of the Edward Colston statue in Bristol, June 2020 (shown) launched a campaign in the United Kingdom that demanded the removal of any statue, monument, or memorial to historical people with ties to the country’s colonial past.

Guy, a bookseller, amassed a fortune as a key stockholder in the British slave-trading company South Sea Company. In 1721, he sold his shares for £250,000, the modern-day value of £400 million, and founded Guy’s Hospital near London Bridge.

Guy “could have sold his shares at any point,” according to research commissioned by the Guy’s and St. Thomas’ Foundation, and it is “revealing” that he held on to his interests for nine years.

Next year, new permanent markers describing how both men amassed their fortunes and their ties to the slave trade will be installed.

It will also show how a portion of the fortune he donated to Guy’s Hospital originated from his investments in the slave trade.

In 2020, boards will be placed around the statue of Thomas Guy at Guy’s hospital.

The bookseller Guy (left) amassed his riches through the purchase of shares in the British slave-trafficking firm South Sea Company, whilst the benefactor Robert Clayton (right) was a member of the Royal African Company, which transported African slaves to the Americas.

St Thomas’ Hospital in London (shown) has earlier declared that the controversial statue commemorating the institution’s founder will be relocated.

This year, a planning application for conservation work will be submitted, and next year, permanent signage will be put.

The Guy’s and St. Thomas’ Foundation stated, “It will assist people to better comprehend the history of both individuals, particularly the means by which [they] and others amassed their fortune, leaving a legacy that has enduring effects on contemporary society.”

The statue is located on the Guy’s campus of King’s College London. The Rev. Dr. Ellen Clark-King, dean of King’s College, told The Times: ‘Like many organizations, at King’s we are aware of our responsibility to address the history of colonialism, racism, and slavery in our own work.

“King’s has initiated its own historical study project that will confront truths about our own links and their difficult legacy, including the university and its affiliated institutions and partners.”

What did Thomas Guy do?

Thomas Guy (1644 – 1724) was a British bookseller, stock speculator, governor of St. Thomas’ Hospital, and founder of Guys’ Hospital in London, which he financed with slave profits.

He amassed his riches by owning £42,000 worth of South Sea Company shares, whose primary goal was to sell slaves to the Spanish colonies.

Between 1715 and 1731, the South Sea Company transported around 64,000 enslaved Africans to Spanish plantations in Central and Southern America.

Guy established Guy’s Hospital for ‘the poorest and sickest of the poor’ in London, at a cost of £19,000, after selling his shares in South Sea Company for £250,000, which is equivalent to £400million in current rates.

Before establishing Guy’s in Southwark, central London, he constructed almshouses and paid for the construction of three new wards at the neighboring St Thomas’ Hospital, where he later served as a governor.

He passed away in 1724, and his bequest was so intricate and valuable that an Act of Parliament was required to implement it; he bequeathed over £220,000 to the hospital.

The majority of his inheritance was left in trust towards the completion of the hospital, with an additional sum designated for the release of indebted prisoners in the city.