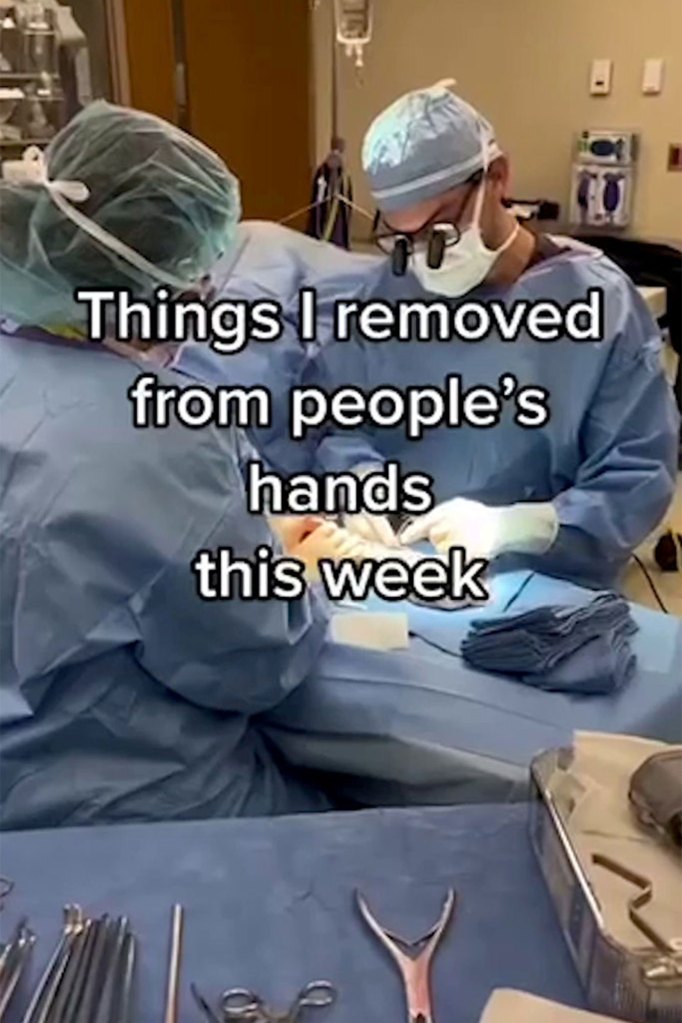 Dr. Nick Pappas, a New Orleans-based orthopedic surgeon, has recently begun publicizing his outlandish surgeries on social media, and his admirers are hooked.

Even though the majority of his hand procedures only last around 30 minutes, the memories of what he has witnessed — including catfish spines, extra fingers, and rings that the skin has grown over — remain with him forever.

“I had one patient with a snake bite, which can cause the entire hand to swell,” Pappas, 43, told SWNS.

“He killed the snake after it bit him, and all the nurses were freaking out because he had a snake bite, the container, and the dead snake he brought with him.”

Pappas stated that he once extracted sea urchin spines embedded to the bone from a patient’s hand after the individual landed onto one of the creatures.

Before attempting to remove a screw from a person’s hand, he must adhere to a certain routine.

“If it’s a screw, I must locate where it entered, identify the screw’s brand, and try various screwdrivers,” he explained.

“It’s possible that the screw’s head is damaged, or that the screw is attached to the bone, in which case I’ll have to chisel it out of the hand. You require the proper images and instruments. It can be difficult and is not necessarily simple,” Pappas continued.

Pappas stated that when it comes to gunshot wounds, it is best to let the bullets alone or study them over time, unless they are protruding from the skin or a full bullet.

“Generally speaking, surgeons do not remove bullets from the extremities unless they are causing pain, are superficial, are in a joint, or are pressing on a neurovascular structure,” he explained.

Sometimes it can be more destructive to try to remove something than to simply leave it alone if it’s not creating any problems.

Pappas noted that finger amputations and re-attachments can be “challenging” and time-consuming when he’s not removing bizarre objects from appendages.

“I replaced someone’s thumb with their big toe in one case. “It took 12 hours and was extremely difficult because the sizes did not always match,” he admitted. If the blood arteries are not functioning properly, it can result in a negative effect. This one, thankfully, was successful.”

And there is never a dull day at work.

“I also had a patient whose three fingers were severed by a Samurai sword, and it took 10 hours to reattach all the nerves, tendons, and bones,” Pappas disclosed.

In other surgery-related news, a Miami TikToker recently went viral after claiming she got a $10,000 treatment to recover her virginity because she wanted to have sex for the first time.