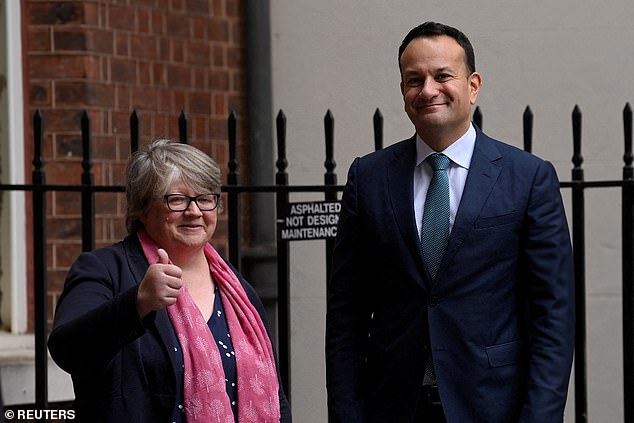 Therese Coffey, who was Liz Truss’ closest supporter, was accused by top No 10 aides of “going rogue” and “neglecting her health brief” as she worked to build a stronghold in 12 Downing Street.

While serving as both the Health Secretary and Deputy Prime Minister, Ms. Coffey was reportedly accused by Cabinet Secretary Simon Case of being too preoccupied with her No. 10 position to focus on the growing Covid levels and other NHS issues.

‘Liz walked down from her apartment and saw the Irish flag had been put out,’ a colleague minister said. Oh, that’s Aunty Therese, her adolescent daughter remarked. Leo Varadkar and she will be meeting.

One of Therese’s obsessions, according to a different minister, was the Home Office. She became the head of the Home Affairs cabinet committee because she was so determined to control Suella Braverman’s activities. The Minister also said that since “she was seldom ever there,” Mr. Case was compelled to step in and manage her health department.

Mr. Case is believed to have stated, “Look, are we genuinely going to examine the fact that Covid hospitalizations have quadrupled in a month” during one meeting.

She allegedly “caused difficulties” by insisting on an office at No. 12 Downing Street, which is typically reserved for the Chief Whip. ‘She insisted on establishing herself there to be close to Liz,’ one source claimed.

She was named Environment Secretary at the reorganization on Tuesday.

According to a source close to her, the Cabinet Office set up the meeting with Mr. Varadkar.

Because she was invited to, she presided over the Home Affairs Committee.

According to the source, neither Mr. Case nor anyone else had ever voiced concerns to Ms. Coffey about the way she was running the Department of Health.

According to Ms. Coffey’s spokesman, she presented the Parliament with her ABCD Plan for Patients, supervised the efficient distribution of the flu and Covid vaccines, and strengthened NHS winter preparations. She reorganized the department to put patients’ needs first and collaborated with the NHS to comprehend the vast differences in treatment across sites.

»Therese Coffey is accused of neglecting her health brief«