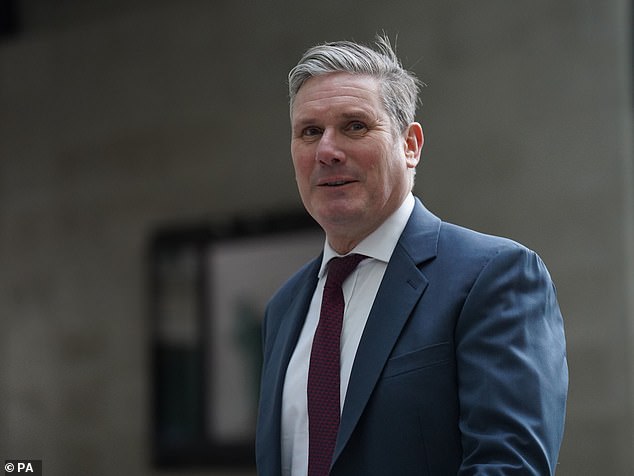 After Labour recommended letting the general public refer themselves for medical care, doctors feared that the NHS situation would worsen. A critic described the measures as “dangerous.”

During the worst winter that many in the health service can recall, Sir Keir stated that patients should be able to self-refer for specialized care without having to see a general practitioner.

Doctors predicted that the demand for health care would increase and that waiting lists would grow longer. Critics argued the proposal may result in specialists being “inundated” by anxious patients, while others warned self-diagnosis via the internet would become an even greater problem.

Starmer advocated that the public be empowered to self-refer for care as part of an NHS overhaul.

Sir Keir stated that self-referrals will reduce “bureaucratic nonsense” and added, “One of the proposals we’ve put forward is to consider self-referral so that individuals do not have to visit a doctor and use up a doctor’s time in order to be referred to specialist care.”

‘If you have back pain and wish to see a physiotherapist, I believe self-referral should be allowed,’ he stated on BBC’s Sunday with Laura Kuenssberg.

If you have internal bleeding and merely require a test, there should be an alternative to seeing a general practitioner.

The head of the Commons health committee, Conservative member of parliament Steve Brine, described Sir Keir’s remarks as “clinically naive at best and dangerous at worst.”

The British Medical Association’s Dr. David Wrigley stated, “It is highly unlikely that self-referral to non-GP specialists will help reduce NHS pressure.” In reality, it would likely have the opposite impact, which is precisely why we need the technical expertise of general practitioners. Patients may refer themselves unnecessarily or to the incorrect speciality, hence increasing demand and lengthening wait times for those who truly require specialized care.

Dr Philip Banfield, an Obstetrics & Gynaecology consultant, told Sophy Ridge of Sky News on Sunday: ‘You have individuals that are the worried well, and the people who truly have an issue say, “I don’t want to bother my doctor; I don’t want to take up someone else’s time” Thus, you paradoxically end up with a widening health disparity.’

In October (red line), more than 7.2 million patients in England were waiting to be seen (one in eight individuals). Over 400,000 people waited in line for at least a year (yellow bars)

Waiting times, exacerbated by the patient backlog caused by the Covid epidemic, are already a key aspect of the NHS crisis. In England, the number of individuals awaiting standard hospital care, such as cataract and hip surgery, reached a record high of 7.21 million in October, the highest figure since records began in August 2007. Under Labour’s proposals, self-referrals would not be utilized for those with suspected cancer or those who need to see a specialist. However, they could be employed for women’s health issues, mental health issues, eye diseases, and individuals requiring testing after discovering blood in their stool.

Dennis Reed from Silver Voices, a group that advocates for older patients, stated, “I’m not sure this proposal has been sufficiently thought through – people don’t want to provide their own care and try to diagnose themselves; they want to see their family doctor.”

“There is a significant risk that people will turn to Dr. Google and flood specialists with referrals for illnesses they do not have.” Others, unwilling to disturb a professional, would not self-refer and hence risk not receiving care.’

Others cautioned that ‘Dr. Google’ – self-diagnosis via the internet – would become an even bigger issue (file image)

It makes absolutely no sense: we need our professionals to be able to focus on individuals who are truly ill and in need of their skills.

“Labour is improperly employing the health service as a political tool to attack the government.”

Other planned Labour improvements include greater funding, more personnel, and a “ruthless focus on ensuring that patients are treated better and faster.” Currently, the majority of GPs operate their own practices under NHS contracts, but Labour intends to phase this out gradually.

All new GP practice managers would be direct NHS employees; self-employed family doctors would cease to exist once current GPs with this structure retire.

MP Steve Brine also cautioned that the measures were “at best clinically naive and at worst dangerous.”

An ally of Health Secretary Steve Barclay stated, “Labour’s new plan for primary care is a proposal for an expensive, unbudgeted, and unfunded top-down reorganisation.” The policy is completely inconsistent.

North Wales-based GP Dr. Eilir Hughes responded to Sir Keir’s notion that persons with ‘internal bleeding’ should be able to self-refer by tweeting that this was ‘hazardous’ and ‘unreasonable’ to expect patients to self-diagnose. How do you determine which test is necessary? What should be done if their diagnosis is incorrect?

Sir Keir detailed his self-referral and GP contract plans in the Sunday Telegraph.

The leader of the Labour Party stated that the health service must “reform or die,” that “well-meaning reverence” for the NHS had overtaken reality, and that it should not be “off limits” to criticism. The notion that the service is still “the envy of the world” is false, he continued.

Self-referrals were regarded as a means of combating the “bureaucratic nonsense” that patients face daily in the health care system.

Sir Keir stated, “Every patient will encounter these mundane inconveniences and inefficiencies.” Across the system and the nation, each one results in a mind-boggling waste of time, energy, and money that could have been used more effectively.’

»“There is a risk that people will turn to Dr. Google”: Health professionals criticize Labour’s proposed NHS reforms«