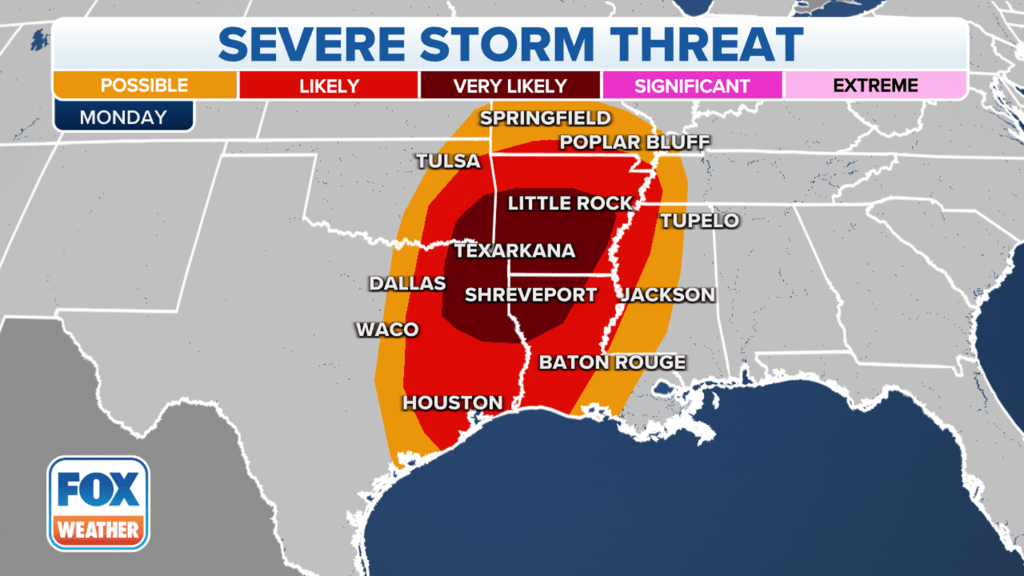 The southern United States could experience strong thunderstorms to begin the new year.

The FOX Forecast Center is monitoring the possibility for hazardous weather beginning on Monday in the eastern portions of Oklahoma and Texas and extending into Arkansas, Louisiana, and western Mississippi. The likelihood of severe storms seems to be highest in the Ark-La-Tex region.

On Tuesday, the severe threat will shift eastward, with the highest risk spanning southeastern Louisiana, Mississippi, Alabama, and northwestern Georgia.

During the next two days, it appears that all types of severe weather are conceivable, with storms capable of producing tornadoes, damaging winds, and hail.

Now is the time for residents of the region to check their tornado preparedness preparations and verify they have a dependable method of receiving severe weather alerts.

The hazardous weather begins in eastern Oklahoma and Texas and extends eastward into Arkansas, Louisiana, and western Mississippi.

The regions identified for severe weather early next week are nearly identical to those devastated by tornadoes in late November and again in early December.

Between November 29 and 30, around 80 Tornado Warnings were issued from eastern Texas into Alabama and the Florida Panhandle. During the outbreak, several people were killed, including a woman and her small son in Alabama.

Between December 13 and December 15, there were approximately 50 reports of tornadoes, two weeks later. During this outbreak, more people were killed, including a woman and her small kid – this time in Louisiana.