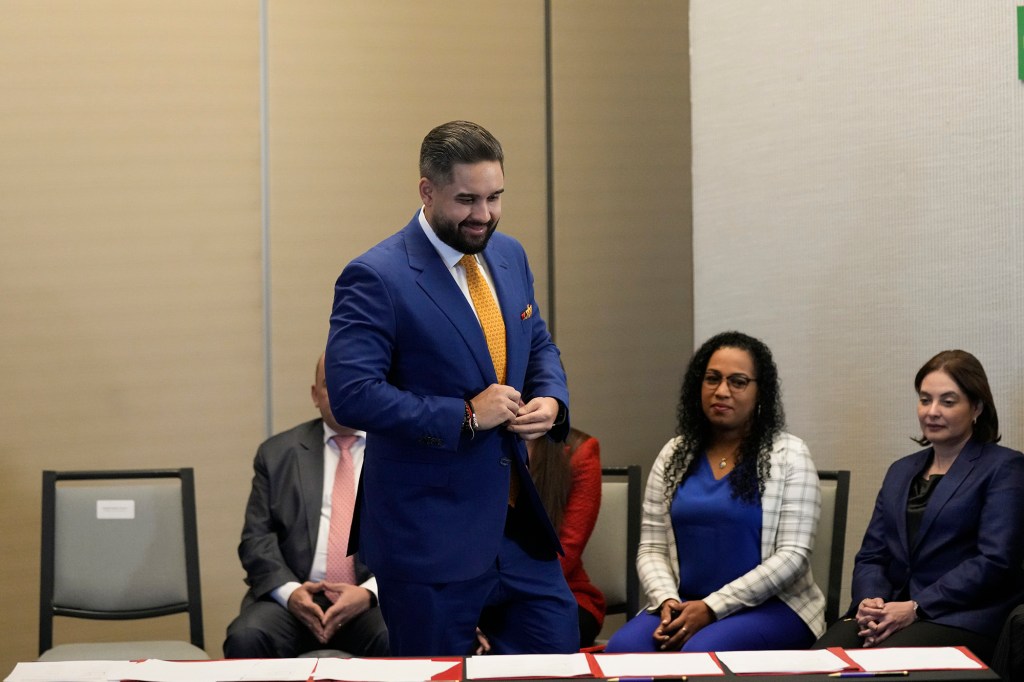 The Venezuelan government and opposition agreed on Saturday to establish a U.N.-administered fund to finance health, food, and education programs for the poor, while the Biden administration eased some oil sanctions on the country in an effort to bolster the newly resumed negotiations between the two sides.

The agreement signed in Mexico City by representatives of President Nicolás Maduro and the opposition, including the faction supported by the United States and led by Juan Guaidó, marked the resumption of long-stalled negotiations meant to find a common path out of the complex crisis in the South American country.

In response, the U.S. government agreed to allow Chevron to extract oil from Venezuela.

The chairman of a group of Norwegian diplomats supervising the negotiations disclosed the general details of the deal for the United Nations-managed social fund.

Venezuelan assets held in the international financial system will be transferred to the fund; however, neither side in the negotiations nor Norway’s chief facilitator, Dag Nylander, disclosed whether the U.S. or European governments have consented to the transfer of frozen assets to the new mechanism.

According to Nylander, the purpose of the fund would be to support the implementation of social protection measures for the Venezuelan people. “The parties have identified a collection of Venezuelan resources frozen in the international financial system that can be accessed progressively, recognizing the necessity to secure the necessary authorizations and approvals” from international institutions and organizations.

Earlier this year, the United Nations published a report estimating Venezuela’s humanitarian needs at $795 million to aid around 5.2 million people through health, education, water and sanitation, food, and other services.

Under President Donald Trump, the United States increased economic penalties against Venezuela and authorized Guaidó to seize control of Maduro’s government’s bank accounts at the Federal Reserve Bank of New York and other U.S.-insured banks.

Guaidó declared himself temporary president of Venezuela in January 2019, stating that his position as then-president of the country’s National Assembly permitted him to form a transitional administration due to Maduro’s fraudulent re-election in December 2018. Dozens of nations, including the United States, Canada, and Colombia, acknowledged him as the rightful leader of Venezuela.

Due to a complex political and humanitarian crisis, over 7 million people have fled Venezuela. Three-quarters of the remaining population lives on less than $1.90 a day, the worldwide benchmark for extreme poverty.

It is anticipated that approximately $3 billion will be gradually directed to the fund.

The debate officially began in September 2021, but Maduro’s delegation left the meetings in October 2021 when businessman Alex Saab was extradited from Cape Verde to the United States on charges of money laundering. Maduro conditioned a resumption on Saab’s release.

The Treasury Department on Saturday announced its decision to allow California-based Chevron to resume “limited” energy production in Venezuela after years of sanctions that have drastically cut oil and gas profits that have flowed to Maduro’s administration.

The move by the Biden administration is the latest step in the thawing of relations between the governments of the United States and Venezuela. It occurred a few weeks after a big prisoner exchange in which Venezuela released seven imprisoned Americans in exchange for the United States releasing two nephews of Maduro’s wife. In March, Maduro released two other Americans.

Under the new approach, proceeds from the sale of energy would be used to pay down Chevron’s debt rather than to benefit Venezuela’s state-owned oil giant, Petroleos de Venezuela S.A., or PDVSA.

Chevron said in a statement that Treasury’s action “brings greater openness to Venezuela’s oil sector.” The corporation noted that the judgment “means Chevron can immediately market the oil being produced by the Joint Venture assets.” We are committed to maintaining a constructive presence in the country and to continuing to support social investment projects designed to provide humanitarian aid.”

Under the condition of anonymity, a senior U.S. administration official briefed reporters on the U.S. action, stating that easing the sanctions was unrelated to the administration’s efforts to increase global energy production in response to Russia’s invasion of Ukraine and that the decision was not expected to affect global energy prices.

The deal about the social fund is part of a broader agenda that is anticipated to proceed in December, including the conditions for the 2024 presidential elections, the release of political prisoners, and the reversal of decisions that prohibit numerous politicians from running for office.

The fund is a tangible product of a process that many viewed with suspicion after international community-mediated negotiations failed to bring the parties to an agreement in previous years.

David Smilde, senior fellow at the Washington Office on Latin America and professor at Tulane University, stated that after the long break in negotiations, “it is up to the two sides to demonstrate to the exhausted Venezuelan population that they can address their needs and restore the country’s functioning democracy.”

“However, this should not be viewed as the conclusion of the negotiations, but rather as a new beginning,” Smilde stated. “The more significant problems of justice and democracy are on the agenda for future sessions. It will be difficult to make progress, but both sides have plenty to gain by rising to the occasion.”