Skip to content
Home » News » News » The ULTIMATE Platinum party guide: How and where to toast the Queen’s 70-year reign 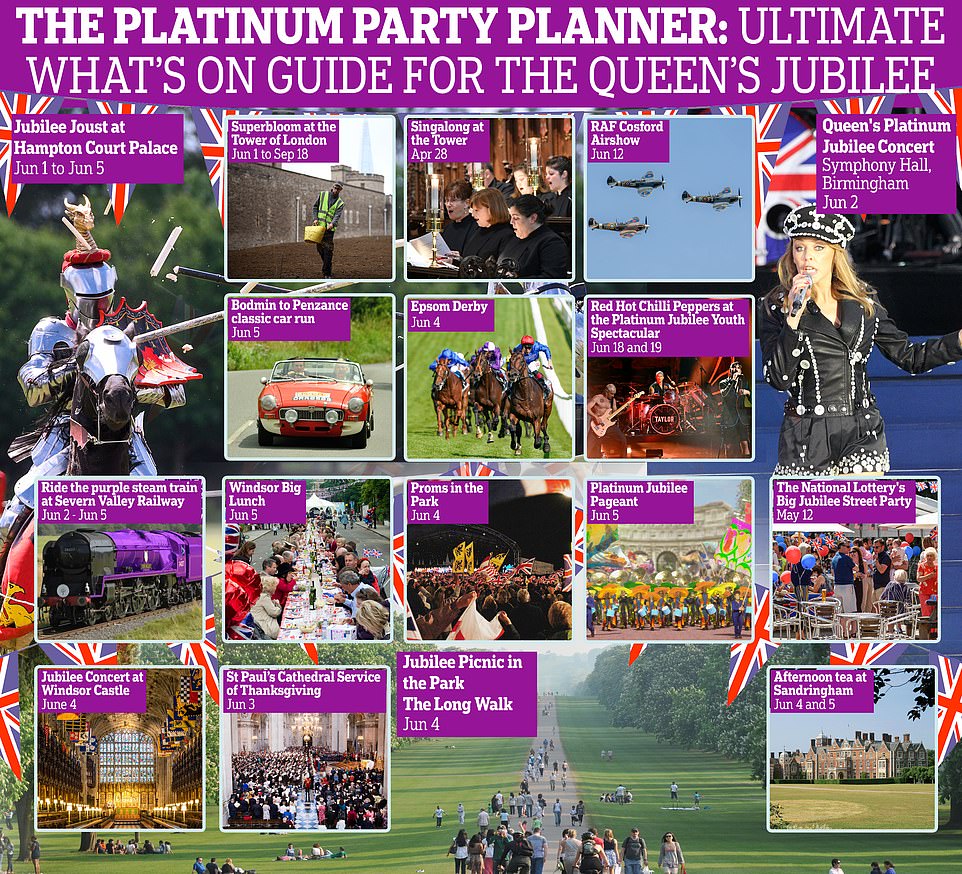 Meanwhile, a 70-kilometre ‘ultra challenge’ is taking place for runners wanting to celebrate Her Majesty’s Platinum Jubilee in a unique way and a 70-mile classic car run in Cornwall, featuring a car from every year of the Queen’s reign, is also pencilled in among a wide variety of events.

Below, MailOnline has compiled the ultimate party guide to celebrating the Queen’s Platinum Jubilee over the special extra bank holiday.

+7
View gallery
Singalong at the Tower

Location: The Tower of London

The Tower of London will host a special concert with ‘a programme of rousing and expressive choral music’ featuring the Choir of the Chapels Royal.

Music inside the St Peter and Vincula chapel will reflect on the ‘themes of coronation and queenhood’.

The event, hosted by Jason Manford and Fleur East, will feature performances from the likes of the Kaiser Chiefs, Tom Grennan, Steps and Ella Henderson among others.

Tickets are now sold out for the event, but ITV and ITV Hub will be airing a special one-off show on a date to be confirmed in the coming weeks.

Superbloom at the Tower of London will see more than 20 millions seeds sewn to create a ‘spectacular, colourful, vibrant field of flowers that will fill the Tower’s moat’.

Visitors will be able to slide down the moat on a mat, while a specially commissioned sound installation and sculptural elements will also form part of the attraction.

Experience the historic sport of jousting in the gardens of the iconic Hampton Court Palace.

A special family-friendly tournament will take place over five days that will see knights compete to be hailed champion, with spectators able to cheer, jeer and follow the fun from the sidelines.

Tickets: Free for members, from £26.10 for adults via the HRP website.

A special concert is to take place at Birmingham’s Synphony Hall to celebrate the Queen’s jubilee that will include a selection of works from throughout her reign.

Titles for the evening include music from the coronation, works dedicated to The Queen and HRH The Princess Margaret, music from across the Commonwealth, personal favourites of Her majesty (My Fair Lady) and even bagpipes.

Tickets: £13-£55 via the City of Birmingham Symphony Orchestra website.

Severn Valley Railway has renamed its 34027 Taw Valley engine Elizabeth II to mark her jubilee – as well as painting it purple.

Across the jubilee weekend, rock bands from the 1950s will play classic hits at multiple stations, while the Battle of Britain Memorial Flypast with a Lancaster will also take place on all four days.

A service of thanksgiving will take place at St Paul’s Cathedral to celebrate the Queen’s 70-year reign. Little information is available at present, but it is understood the service will not be open to the public.

Tickets: Closed to the public.

The concert will featre ‘special performances’ with the benefit of ‘amazing chapel acoustics’ and will be hosted by BBC Radio Three’s Petroc Trelawney.

Tickets: Tickets and further details for the Concert will be available in due course.

Platinum Party at the Palace

A special concert will take place in front of the Queen at Buckingham Palace.

MailOnline reported last year that Sir Elton John, Ed Sheeran and Stevie Wonder were being lined up to perform at the concert, set to be the ‘biggest celebration’ of the year in the UK.

It is hoped to be similar to the Diamond Jubilee concert organised by Gary Barlow in 2012, which saw the likes of Sir Paul McCartney, Sir Tom Jones, Robbie Williams, as well as Kylie Minogue, Madness, and Annie Lennox take to the stage.

A ballot for tickets has now closed, but up to 10,000 people will attend and the show will be broadcast live on BBC One and BBC iPlayer.

TV: BBC One and BBC iPlayer

A ‘Best of British’ Proms concert will feature Christina Johnson and a live music ensemble.

Rousing classics such as Land of Hope and Glory, Abide with Me, Nimrod, God Save the Queen, Jerusalem, You’ll Never Walk Alone will be played along with hits from the West End.

Jubilee Picnic in the Park

Windsor’s iconic Long Walk will host a huge picnic event with a ‘carnival atmosphere’ featuring ‘cars, music and sport from across the decades of Her Majesty’s reign’.

The Platinum Party at the Palace will also be shown on giant screens for all to enjoy with their food.

Picnic in the Park afternoon tea at Sandringham

Where better to celebrate the Queen’s Platinum Jubilee than at her much loved country retreat at Sandringham?

Visitors can enjoy a ‘delicately packaged’ afternoon tea in a ‘commemorative Platinum Jubilee design’ in the estate’s Parkland.

The day after its Picnic in the Park event, Windsor will host its annual Big Lunch.

Friends and families will again be encouraged to bring picnics and union jack flags, while giant screens will show the Platinum Pageant.

Tickets: Arrangements are currently being put in place for a facility to reserve tables free of charge via a ticketing system, with details available soon.

The Pageant will combine street arts, theatre, music, circus, carnival and costume to celebrate the Queen’s ‘love of the natural world and dedication to the Commonwealth’.

A procession will take place along The Mall, emulating a moving river, while vintage cars and motorbikes will also feature.

The event is split into four parts, the first of which will contain more than 2,000 military personnel, followed by vintage clothes and classic cars, an artistic element and then a ‘surprise package’.

Tickets: Open to the public, no booking required.

Seventy cars from 70 years will travel 70 miles through Cornwall from Bodmin to Penzance to mark the Platinum Jubilee.

Organised by the Rotary Club of Bodmin, the event’s oldest vehicle will be a 1952 MG TD.

The ultra challenge will see competitors given the choice between running the full 70k, or spreading the distance across a kayak, run and cycle.

There will be medals for all who complete the event, while there is the option to run a shorter distance if desired.

Tickets: Open to the public

Time: Gates open at 8am

The RAF Cosford Airshow will tell the 70-year-old story of aviation and its links to royalty through themed displays, while visitors can also enjoy a hands-on experience through immersive story-telling.

‘A huge amount of work has been done in the early stages of planning this event to ensure we can provide a safe and enjoyable show for all of our visitors and we look forward to welcoming everyone back to RAF Cosford for a day of celebration and entertainment.’

Tickets: Adults from £34, under 16s go free. Available to buy on the Cosford Airshow website.

TV presenter Stephen Mulhern will host an event at the newly constructed arena that will feature a motorcycle display along with Scouts, Guides and Highland dancing.

Tickets: Open to the public, but advance booking required.