Skip to content
Go Home «» News «» Breaking News «» The time for discussion has passed; ANC must act before it is too late 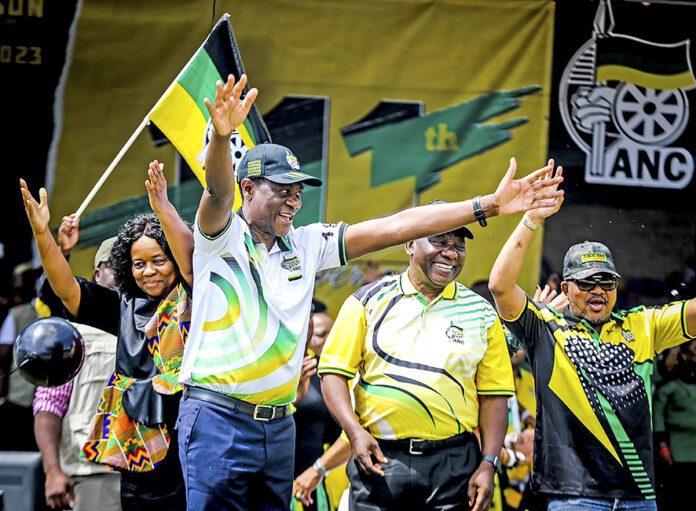 The ANC commemorated 111 years of existence in Mangaung, Free State, and the party’s president, Cyril Ramaphosa, presented the January 8 statement, which is customarily how the ANC prepares for the upcoming electoral year.

The president outlined the party’s priorities for 2023, which include fixing the energy crisis and addressing loadshedding, creating jobs, enhancing the delivery of basic services, battling crime and corruption in South Africa, and so on.

Despite the stated aims, South Africa is confronted with pressing issues that have persisted for over a decade. The country is experiencing devastating power outages, and Eskom is incapable of restoring power.

As a nation, we are confronted with a number of critical problems, such as low access to healthcare and basic services, inadequate implementation of governance and accountability processes, and a rising national debt. Importantly, the country has also seen modest economic growth over the years, despite a surprising 1.6% increase in gross domestic product in the third quarter of 2022. Low economic growth has significant effects on employment creation, and the following factors may be to blame:

In 2020, a poll was conducted to assess the quality of education across the globe. South Africa was placed second-to-last globally. We placed 75th out of a total of 76 nations. South Africa was ranked 114th out of 137 in the World Economic Forum (WEF) 2017/18 Global Competitiveness Report.

Restriction on small and medium-sized businesses

It is commonly established that small and medium-sized businesses play a crucial role in lowering unemployment and fostering economic participation. According to a survey by the International Finance Corporation, SMBs account for more than 90 percent of all formal businesses and contribute 34 percent of GDP. Multiple constraints, including high levels of government bureaucracy, substantial tax loads, and restrictive labor restrictions, preclude SMEs from being greater job creators.

Unfortunately, tender rigging, delayed projects, ineffective boards, and state capture have resulted in substandard service delivery and the theft of billions of rand from the country. Our country’s potential for development has eroded as resources have migrated from creating value for South Africans to meeting the requirements of a select few.

The World Economic Forum identified South Africa’s extended economic stagnation as the greatest threat to the nation’s recovery during the next two years.

The rate of economic expansion has been average.

The political and economic prospects for South Africa is bleak. The outlook for the country is bleak, and South Africa is a failed state. One of the ANC’s aims for 2023 is to “bravely mobilize social partners around economic reconstruction and recovery in order to increase job creation, investment, empowerment, and action to build a better Africa and world.”

Over the years, we have witnessed the ANC develop policies but fail to implement them adequately, recycle party members into cabinet positions, become more corrupt, prioritize their own interests over those of South Africans, engage in cadre deployment, mismanagement of funds, and the collapse of state-owned enterprises, all of which impede the development and creation of jobs.

The real concern is how the governing party intends to put processes in place to implement the enacted resolutions. South Africans have reached their limit of anger and exhaustion, and they seek change with new ideas, strategies, bold and realistic ideas, and policies that will resonate with the people of South Africa, both rural and urban, better leadership with high integrity to further develop the country, and better prospects for growing the economy for a better outcome.

Our leaders must develop an unified strategy to address the unrelenting problems of this country and ensure that resilience and solid coordination are in place prior to any potential disaster.

Combating corruption is one of the ANC’s top priorities for the upcoming year, despite the fact that the ruling party has failed to do so for many years. Will however 2023 be different? South Africans must now see prosecutions in addition to arrests and case postponements.

Campaigns and catchy words should no longer be utilized. Now, more than ever, is the time for the ANC to act and be true to its pledge.

»The time for discussion has passed; ANC must act before it is too late«