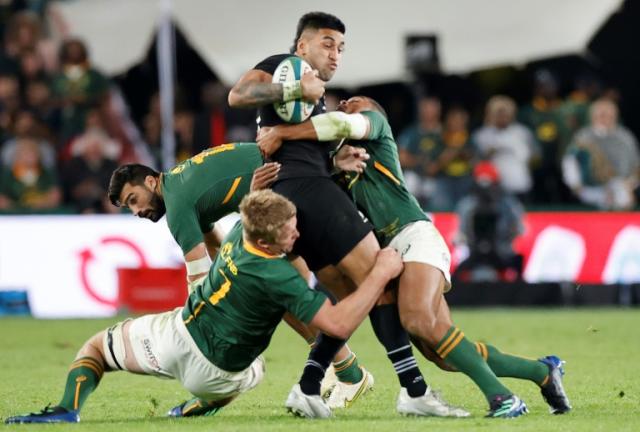 South Africa will face New Zealand twice in the lead-up to the 2023 Rugby World Cup in France, when they will defend their title.

On July 15 in New Zealand, the Springboks and All Blacks are scheduled to face off in the Rugby Championship.

They will face again at Twickenham in London on August 25 in their final tune-up before the World Cup in France begins on September 8.

The teams would meet in the quarterfinals of the World Cup if one of them wins their respective group and the other finishes second.

A rivalry that began in 1921 continued last year with two tense Tests.

OPINION | In 2023, RASSIE ERASMUS can cement his legacy!

South Africa won 26-10 in Mbombela before losing 35-23 in Johannesburg due to a late collapse.

Despite the fact that the South African Rugby Union has not issued a 2023 schedule, the AFP has learned that the Springboks will play six Tests prior to their arrival in France.

On July 8, they kick off their Rugby Championship campaign at home against Australia, which has been condensed to one round due to the World Cup.

South Africa will host Argentina in the last round of the Championship on July 29 after facing New Zealand.

SPRINGBOKS IN POOL B FOR 2023 RUGBY WORLD CUP
On August 5, they will meet the Pumas once more, this time in Buenos Aires, before facing Wales in Cardiff on August 19 and New Zealand six days later.

Highlights were the victory against New Zealand in Mbombela, the end of a long losing streak in Australia with a decisive victory in Sydney, and the season-ending victory over England in London.

However, an uneven team lost for the first time at home to Wales and were fortunate to lose by only eight points in Adelaide to Australia after a poor performance.

On a November tour of Europe last year, the Springboks were defeated by Ireland and France, two of the favorites to win this year’s world championship.

At the World Cup, South Africa is in Pool B with Ireland, the top-ranked team, Scotland, Tonga, and Romania, and the top two teams go to the knockout round.

According to Garrin Lambley © Agence France-Presse