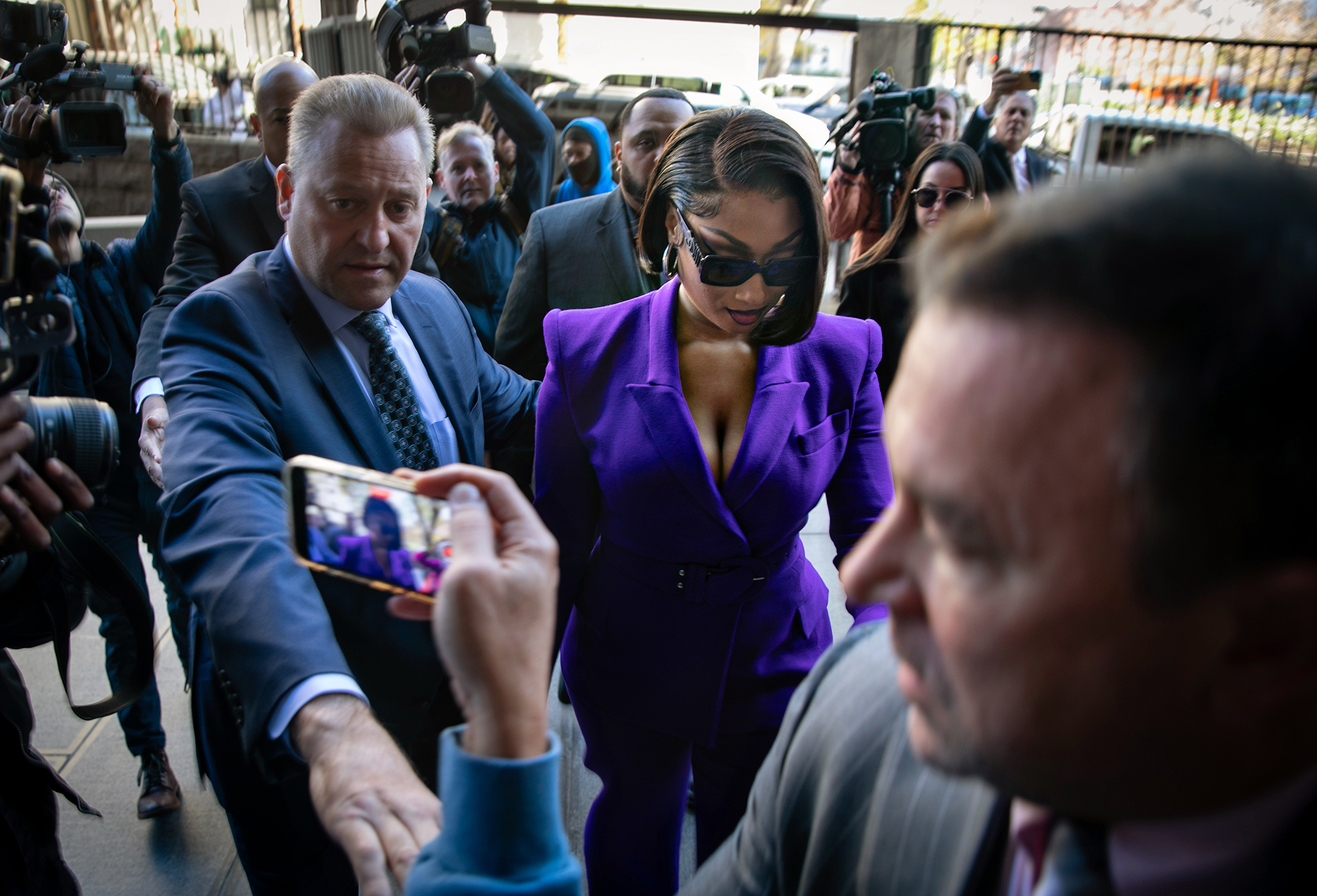 Tuesday, Megan Thee Stallion appeared in court in Los Angeles to testify against fellow rapper Tory Lanez, who reportedly shot the “Savage” rapper in the feet after a quarrel in 2020.

And Megan, 27, took the stand in a vibrant purple pantsuit by Sergio Hudson, which some Twitter users were quick to point out is the color for domestic abuse awareness.

“The fact that Megan wore a purple suit, purple being the color associated with domestic violence… what women endure under this system…

“no words,” a Twitter user tweeted with the hashtag #WeStandWithMegan.

“Ms. Megan is serving lewks and justice,” chimed in a second speaker.

Beyoncé, Amal Clooney, and former First Lady Michelle Obama have all been dressed by the African-American designer Hudson; he is known for his creative use of color, and Megan added even more vibrancy to her outfit with a rainbow-colored Chanel flap bag and red-soled Christian Louboutin heels.

The fact that Megan wore a purple suit, purple being the color associated with domestic abuse, exemplifies the struggles women face under this patriarchy.

Lanez (actual name Daystar Peterson) is charged with assault with a firearm, illegal possession of a firearm, and careless discharge of a firearm. In 2020, he entered a not guilty plea and denied the charges. He risks more than 22 years in prison if convicted.

During her four-hour testimony, Megan (whose official name is Megan Pete) recounted the night Lanez, with whom she occasionally had a sexual relationship, allegedly shot her after they returned from a party at Kylie Jenner’s home, according to the LA Times.

She stated that Lanez was unhappy over being asked to leave the gathering and instructed Megan to “stop lying” to her friend Kelsey Harris, who was also in the car at the time. Megan claims that after Lanez allegedly called both ladies “bitches and hoes” and she attempted to escape the vehicle, Lanez fired rounds while saying, “Dance, bitch!”

Outside the courthouse, supporters carried “We Stand With Meghan” placards.

When asked why she did not contact the police immediately, the “Body” singer stated that the incident occurred “during the height of police violence” in the wake of the George Floyd and Breonna Taylor murders, and that she did not feel comfortable speaking with the LAPD.

Even two years later, Megan expressed regret for reporting the incident, telling the court, “I wish he had just shot me dead if I had known I would have to endure this agony.”