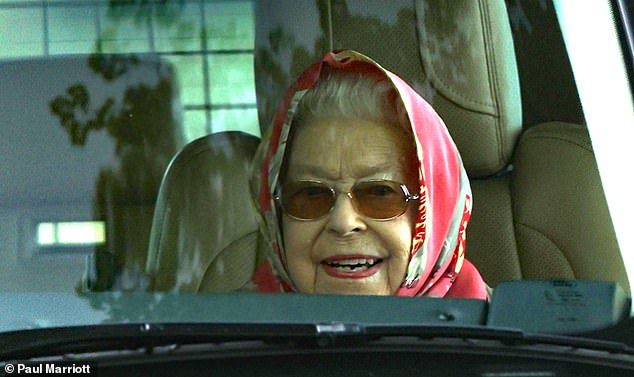 The monarch is taking the time to see her horses as they prepare for the flat racing season including the Epsom Derby in June, which she hopes to attend during her Platinum Jubilee celebrations.

It came as it emerged she and Prince Harry’s father Prince Charles are both very ‘keen’ for him, his wife and children to jet in from California to mark the Queen’s 70 years on the throne.

Buckingham Palace is said to have promised the Sussexes full armed security at all Royal Family events in June in a bid to reassure them after Harry said he felt ‘unsafe’ in Britain.

But despite Her Majesty and Prince Charles removing the main obstacle for Harry, Meghan, Archie and Lilibet attending, the Duke of Sussex is still said to be genuinely undecided about whether to jet in to celebrate his grandmother’s 70 years on the throne.

A palace source told the Sunday telegraph that ‘the ball was in his court’, adding: ‘His grandmother and father keen to welcome the Sussexes to “family” events’.

It would mean that the Sussexes would be welcomed onto the Buckingham Palace balcony with the rest of the royals to watch a RAF flypast and the Trooping the Colour on June 2, the Queen’s official birthday.

But they would be unable to attend working elements of the Jubilee, having quit as frontline royals when they emigrated to Canada and then Los Angeles two years ago.

Despite the reassurances from his British family, when asked about whether he would attend he said last week: ‘I don’t know’.

Miranda Barbot, who was part of the team behind Obama’s re-election in 2012, has been hired by the Sussexes to ‘transform their image’.

Prince Harry and Meghan Markle have hired the PR guru who helped to re-elect Barack Obama in the latest hint the couple may have political ambitions.

Miranda Barbot, who was part of the team behind Obama’s re-election in 2012,  has been hired by the Sussexes in the hope to ‘transform their image’.

Speaking to the Mirror, an insider said: ‘There are shades of the Clintons or even Kennedys. It wouldn’t be a huge shock now if Meghan went into politics.’

Ms Barbot was a 19-year-old undergraduate at university when she won a scholarship onto Obama’s team.

According to sources, she has now left US public relations firm BerlinRosen and joined the Sussexes’ firm Archewell.

She was also reportedly been spotted among Harry and Meghan’s team at the Invictus Games in Holland.

Ms Barbot was named a ‘key figure’ in Harry and Meghan’s team and described as a ‘shrewd operator’ by a source.

They added that Ms Barbot has ‘plenty of experience’ to help them adapt to their lives away from the Royal Family.

On Twitter, Ms Barbot’s bio says she is a ‘New Yorker and year-round iced coffee drinker.’

Sources have told the Daily Mail that the prince appeared mollified at the plans put in place when he and Meghan visited the Queen at Windsor.

The couple brought over their own private bodyguards from the US but stayed on the Queen’s Windsor estate and received a Special Escort Group (SEG) detail when travelling outside.

The SEG provides mobile armed protection to both royals and government ministers. This ‘hybrid’ model is now likely to be offered to Harry, Meghan and children, Archie, two, and, Lilibet, ten months, when visiting.

It would be funded by taxpayers as the Home Office have made clear that they cannot agree private financial arrangements with anyone receiving Met Police security.

Harry, 37, is taking legal action against the Home Office after being stripped of armed police protection. He says he does not feel safe under current security arrangements bringing his family to the UK and has offered to pay for British police bodyguards himself.

It came as Donald Trump urged the Queen to strip Prince Harry and Meghan Markle of all their royal titles as he described the Duke of Sussex as being ‘whipped like no person I think I’ve ever seen’ and ‘led around by his nose’.

The former US president admonished Harry for being ‘so disrespectful to the country’ and an ’embarrassment’ – adding that the Queen should ban him from even visiting Britain and tell him: ‘Frankly, don’t come around.’

Mr Trump also said Harry had been ‘led down a path’ and that he wondered whether the Duke – who stepped down as a senior royal in early 2020 with his American wife – would ‘go back on his hands and knees and say “please”.’

He claimed is ‘not a fan’ of Meghan and ‘wasn’t right from the beginning’, telling Piers Morgan on the new channel TalkTV: ‘I’ve been a very good predictor, as you know – I’ve predicted almost everything. It’ll end, and it’ll end bad.’

It was Mr Trump’s latest attack on the couple, with him having previously spoken of his support for the 96-year-old monarch who hosted him with wife Melania in a State Banquet at Buckingham Palace in London in June 2019.

And it comes after Harry and Meghan flew from their home in California and stopped off in England to visit the Queen at Windsor Castle before heading to The Hague in the Netherlands for the Invictus Games, which marked their first public appearance together in Europe since quitting as senior working royals more than two years ago.

In the interview, Mr Morgan asked Mr Trump whether the Queen should strip Harry and Meghan of their royal titles.