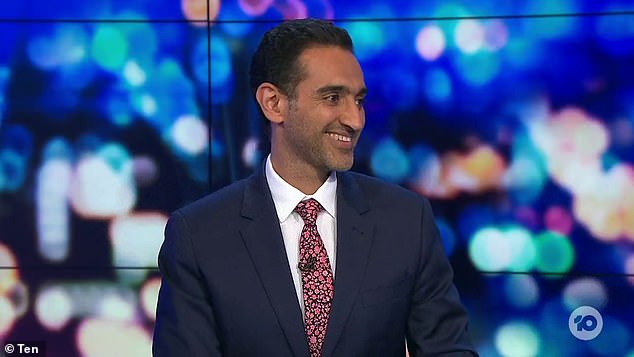 The conservative columnist said he gave young people a ‘slap’ in a recent article for the Herald Sun, saying they ‘constantly whinge and whine’ about the state of the country.

He was lambasted by the other hosts of the Channel Ten program, with Waleed Aly, Tommy Little and Chrissie Swan all arguing against Price.

‘Steve Price is here to make millennials cry,’ Aly said as he opened the program, before Price thanked him for ‘that little slap’.

The co-hosts pressed Price on his column where he said ‘stop whingeing and start living. You’ll be much happier’, with the commentator doubling down on his comments.

‘I called them lousy whingers who need to get over themselves. That’s all,’ he said on Monday’s broadcast.

‘What I loved the most is you didn’t listen to anyone,’ Swan said to Price, referencing their argument on the show last week.

‘The idea that millennial also be upset because they read your newspaper column is wildly arrogant,’ Little added.

Price clashed with Swan and Peter Helliar on the show last Tuesday, where the Herald Sun columnist launched into a tirade against millennials.

‘They’ve got to realise they’re … a very lucky generation,’ he said.

‘They’ve grown up in a country that’s safe, that’s prosperous, they’ve got a pretty good chance of getting a job because they’ve had a free university education.’

Helliar and Swan responded to his comment, saying Price grew up in vastly different circumstances than Aussies today.

‘On a planet that’s being torched and they won’t own their own home?’ Helliar replied.

‘That’s not free. Yours was free,’ she said.

Everybody dumps on my generation, the Baby Boomers, saying ‘you had it easy’,’ Price said.

Helliar replied: ‘When did anyone say you had it easy? I didn’t see that bit.’

Price said young people had been ‘suggesting’ it was ‘all hard for them and not hard for anyone else’.

‘You did have it a lot easier than this generation,’ host Hamish McDonald said.

‘It was a lot cheaper to buy a house, you got free university education’.

Price was angered by the suggestion, saying he had to ‘work hard every day of my life since I was 17’, before Swan pointed out he had again missed the point.

‘So are they, and they feel like they don’t have the choices,’ she said.