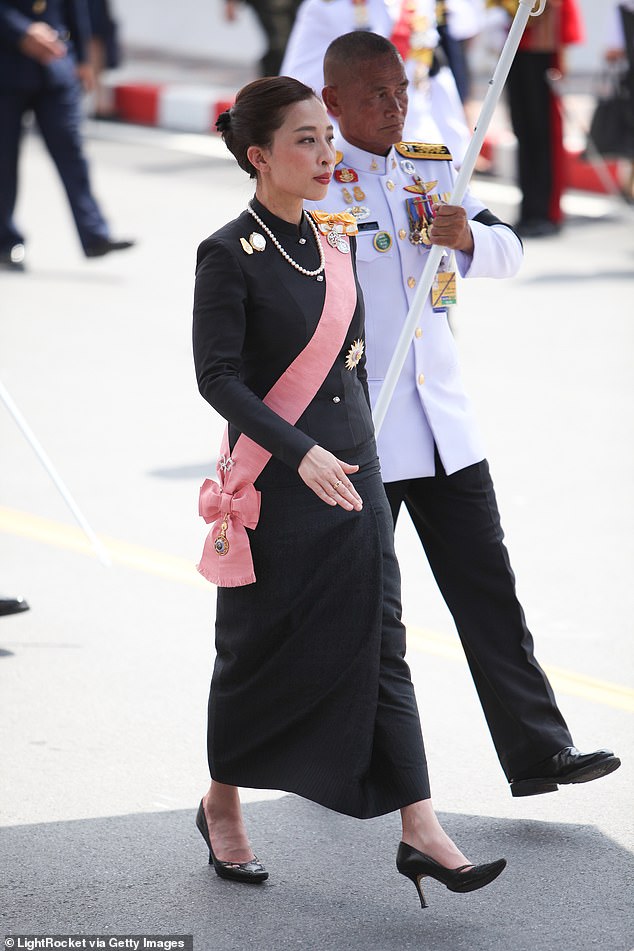 It has been reported that the princess daughter of Thailand’s playboy king is on life support after suffering a heart attack while jogging with her dogs.

Last night, Princess Bajrakitiyabha, 44, fell while running with her dogs in the Khao Yai National Park in the Nakhon Ratchasima region of central Thailand.

According to reports, the princess, who was being groomed to succeed her father King Maha Vajiralongkorn, was evacuated by helicopter from the Pack Chong Nana Hospital to the King Chulalongkorn Memorial Hospital in Bangkok early today morning.

Last night, Princess Bajrakitiyabha, 44, fell while apparently running with her dogs in the Khao Yai National Park in the Nakhon Ratchasima region of central Thailand.

Reportedly, a life-support equipment is keeping her alive, and Prime Minister Prayut Chan-o-cha has returned from an overseas trip early.

Author and lecturer Andrew MacGregor Marshall, a Thai royal scholar, stated that the prognosis was “extremely gloomy” and that the monarchy, which imprisons critics, could be driven into disarray.

Princess Bajrakitiyabha was being groomed as the successor to controversial ‘crop top king’ Vajiralongkorn, according to MacGregor, who asserts that the occurrence has ‘massive repercussions’ for the Thai monarchy.

The revelation that the monarch spent much of the coronavirus outbreak in Germany with a rumored group of’sex warriors’ organized in a four-star hotel has generated controversy.

The king, who is 70 years old, has seven children from three prior marriages that all ended in divorce.

The only child of King Vajiralongkorn and his first wife, Princess Soamsawali, is Princess Bajrakitiyabha.

After accusing their mother, Sujarinee Vivacharawongse, of infidelity in 1996, King Vajiralongkorn exiled his first four male heirs from their homeland.

MacGregor stated, “Princess Bajrakitiyabha was initially transported to Pak Chong Nana Hospital, where CPR was unsuccessfully attempted for hours.” The king was transported to the hospital by military chopper.

‘According to royal sources, the princess’ prognosis is dire, and it is highly doubtful she will ever recover. However, she could be kept artificially alive with ECMO for weeks or even months while the dictatorship decides what to do.

It was expected that Bajrakitiyabha would be the next monarch or would serve as regent for her younger half-brother Dipangkorn, who has autism and will not be able to rule alone. “These occurrences have enormous ramifications for the Thai monarchy.”

In the early hours of the morning, residents of northern Bangkok reported hearing helicopters. Supposedly, one aircraft carrying the injured princess was flanked by two military helicopters.

The Thai palace has not commented on the purported incident, and compliant local media have restricted coverage of it.

Since the collapse of absolute monarchy in 1932, the Thai military has staged more than a dozen coups in support of the monarchy.

In spite of decades of political unrest, the constitution states that the monarchy must be held in “a position of cherished worship.”

In 2016, Vajiralongkorn succeeded his father, King Bhumibol Adulyadej, who had ruled since 1946.

The next king was not officially crowned until May 2019, when he was carried in a six-and-a-half-hour procession through Bangkok on a gilded platform.

During the event, he was carried on a golden platform through Bangkok’s ancient district in a magnificent six-and-a-half-hour parade.

In an unexpected move, the King married his long-term consort and awarded her the title of Queen Suthida just days before the coronation.

Suthida Vajiralongkorn na Ayudhya, a former flight attendant for Thai Airways, had to lie on the floor while the monarch presented her with a gift during the wedding ceremony.

At the height of the outbreak in 2020, Vajiralongkorn reportedly spent much of his time with an entourage of’sex warriors’ at the Grand Hotel Sonnenbichl in Garmisch-Partenkirchen, Germany.

According to reports, the monarch reserved the entire fourth level, which contains a “pleasure room” and is furnished with “treasures and antiquities” from Thailand.

According to legend, the King has a demi-divine rank and must be seated above his subjects.

His’sex soldiers’ are rumored to be a military outfit named the SAS, similar to Britain’s special forces, with the same slogan, ‘he who dares, wins.’

A hotel employee stated that employees are not permitted on the fourth floor, where the king and his entourage have set up camp.

Due of the king’s diplomatic immunity, German authorities have little ability to intervene.

Reportedly, Queen Suthida spends the majority of her time alone at the Hotel Waldegg in Engelberg, Switzerland.

In Thailand, the monarch is shielded from criticism by one of the world’s strictest defamation laws, which carries prison penalties of up to 15 years.

Who is the former playboy who turned king? The Thai monarch has spent the majority of his life abroad and has been married three times previously.

The 64-year-old King Maha was born in Bangkok’s Royal Dusit Palace on July 24, 1952. He is the only son and male successor of King Bhumibol and Queen Sirikit.

As a teenager, he attended two public schools in Britain: King’s Mead School in Seaford, Sussex, and then Millfield School in Somerset. After that, he trained for a military career in Australia.

In 1976, he graduated from the University of New South Wales with a bachelor’s degree in liberal arts and was commissioned as a lieutenant.

After graduating, he began military training with the United States, the United Kingdom, and Australia. He also qualified as a fixed-wing helicopter pilot in the Royal Thai Army in the late 1970s.

As is traditional for all Thai Buddhist males, his military career was suspended in 1978 so he could be ordained as a Buddhist monk for a brief while.

In 1977, he married his first wife, a cousin named Princess Soamsavali Kitiyakara, with whom he had a daughter in 1978 named Princess Bajrakitiyabha. They split up in 1993.

Nine months after the birth of his daughter, the prince had a son with actress Yuvadhida Polpraserth, with whom he had a turbulent relationship and a total of five children.

Three years later, his relationship with Ms. Polpraserth ended as she left to the United Kingdom in 1996, following a dramatic altercation.

In 2001, he married his third wife, Srirasmi Suwadee, characterizing her as a’modest and patient’ woman who ‘never speaks terrible things about anyone.’ As with his previous marriages, their time together was marked by a number of problems.

In 2007, web film showed the couple giving a party at the Royal Palace in Bangkok for their pet poodle, who held the rank of Air Chief Marshall. Princess Srirasmi, a former waitress, got on her knees and ate from a dog bowl in the same video in which she sang happy birthday to the dog topless.

Srirasmi endured a very public fall from grace in late 2014, when many members of her family were detained as part of a police corruption investigation and charged with lese majeste (treason).

Later, Vajiralongkorn divorced her, and she was stripped of her royal titles. The crown prince has spent the majority of his life away from the public spotlight, although in recent years, as his father’s health has deteriorated, he has participated in several important occasions.

Even though he had several military titles, including Knight of the Ancient and Auspicious Order of the Nine Gems, the prince acknowledged to an interviewer that he was unable to tie his own shoelaces at the age of 12 because courtiers had always done it for him.

The crown prince has spent the majority of his life living abroad in Germany, away from the public spotlight. However, in recent years, as his father’s health has deteriorated, he has participated in several formal occasions.

In August 2015, he led senior officials of the current junta and tens of thousands of people on a mass bike ride around Bangkok, a rare public appearance of such prominence.

In October 2016, 50 days after the death of his father, the venerated Bhumibol Adulyadej, he was crowned king. Due to his father’s declining health, he was compelled to return to the United States from Germany.

Thai junta leader Prayuth Chan-ocha confirmed the succession of the Crown Prince with the following statement: “The administration will inform the National Legislative Assembly that His Majesty the King appointed his heir on December 28, 1972.”

In an unexpected decision, he requested a one-year delay in his coronation and elevation to the kingdom in order to grieve the death of his father.