Skip to content
Home » News » News » The Prime Minister has been away since last Sunday on official trips to a NATO leaders’ summit in Spain, a meeting with President Macron in Paris and a high-security trip to Kyiv 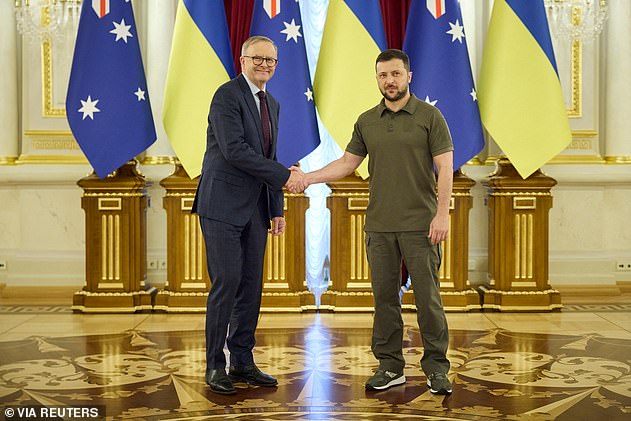 Anthony Albanese has come under fire for being away from home while deadly floods hit NSW, but his supporters supported him since he was on a historic trip to the conflict-torn Ukraine.

Since last Sunday, the prime minister has gone on business travels to a NATO summit in Spain, a meeting with President Emmanuel Macron in Paris, and a high-security journey to Kyiv to meet with Ukrainian President Volodymyr Zelensky.

The hashtags “Airbus Albo” and “Where’s Albo” trended on Twitter, and some Australians referred to him as “Anthony Overseasy” despite the fact that all of the flights were on official business and in the country’s best interest.

Since winning the election on May 21, Mr. Albanese has traveled more than 45,000 kilometers on travels to Spain, France, Poland, Japan, Indonesia, the UAE, and Ukraine, where he on Sunday promised an additional $100 million in aid for the country’s defense against Russia.

14 out of the 42 days he has been in office, or one-third, have been spent abroad.

Dan Tehan, the shadow minister for immigration, claimed that Mr. Albanese, who would visit Fiji for a Pacific Islands meeting the next week, was overly preoccupied with global issues.

He told Sky News, “Well, it is worrying because what he seems to be doing is concentrating entirely on the foreign front and good Prime Ministers can do both.”

The Prime Minister’s office stated that he was receiving a briefing on the NSW floods and that after he returns late on Tuesday night, he will think about visiting flooded districts.

Angry Australians contrasted Scott Morrison’s controversial trip to Hawaii during the December 2019 bushfires to Mr. Albanese’s absence during the floods.

In a tweet from March, Mr. Albanese said: “If I’m Prime Minister, I won’t go missing when the going gets tough – or pose for photos and then disappear when there’s a work to be done.” Critics brought up this statement.

“I’ll turn up, I’ll act, and I’ll strive every day to unite our nation.”

Although the action was backed by MPs on both sides of the political spectrum, some also criticized the PM’s choice to give Ukraine more of the taxpayers’ money.

Others, though, argued that the comparison to Hawaii was unfair because Mr. Albanese was away on important foreign policy missions while Mr. Morrison was relaxing with a drink on the beach.

Mr. Albanese claimed that Australia’s attendance at the NATO summit in Spain was very advantageous for discussing China’s escalating assertiveness in the Indo-Pacific.

For the first time, the group labeled China a “security danger”.

After Mr. Morrison backed out of a $90 billion submarine agreement with a French manufacturer and later revealed private emails between him and Mr. Macron, he had a fruitful meeting with President Emmanuel Macron to mend tense relations.

On his high-security visit to Ukraine, Mr. Albanese was likewise welcomed with open arms.

His significant tour demonstrated that the western world, not simply Europe, is unified against Russia’s aggression. He is the first Australian Prime Minister to visit the nation.

After Moscow invaded in February, Australia is the greatest non-NATO supporter to the nation’s war effort.

Peter Dutton, the leader of the opposition, took Sunday off and won’t be back at work until July 19.

More than 32,000 people in NSW, largely in Greater Sydney, were encouraged to leave their homes over the weekend due to heavy rain, and another 6,000 people will be on alert on Monday.

After being rescued from Sydney’s Parramatta River, one man, a kayaker, perished.

Murray Watt, the minister of emergency management, has been aggressively responding to the flooding and has dispatched 200 ADF personnel to assist.

As heavy rain continues to fall, 30 neighborhoods are in danger of submerging, and 71 evacuation orders are in effect. NSW may be seeing the worst floods in the past 18 months as a result of the deluge.

Major flooding has occurred in North Richmond due to river levels exceeding those observed in March (15.92 meters), with potential for further increases. Sydney Basin, the Hawkesbury Nepean, and the Georges River water levels are all of great concern.

The town of Camden, which has been inundated for the fourth time this year, is among the worst affected, along with Lansvale, Chipping Norton, and Moorebank in some areas.

200 defense personnel—including two ADF nighttime helicopters and an additional 100 soldiers—were sent to the scene on Monday to help during the crisis.

Despite not having yet talked with the prime minister about the developing crisis, NSW Premier Dominic Perrottet said the federal and state emergency ministers were coordinating their response.

He told reporters on Monday, “We have worked with the Commonwealth government to get ADF troops on the ground immediately, providing crucial help, going door-to-door, and delivering instructions and advise to individuals who are flood-affected.”

The fact that the ADF were on the scene right soon is really encouraging, and it is clear that things have changed from the earlier in the year flooding occurrences.

“We can always use the lessons from the past to ensure that we perform better in the future.”