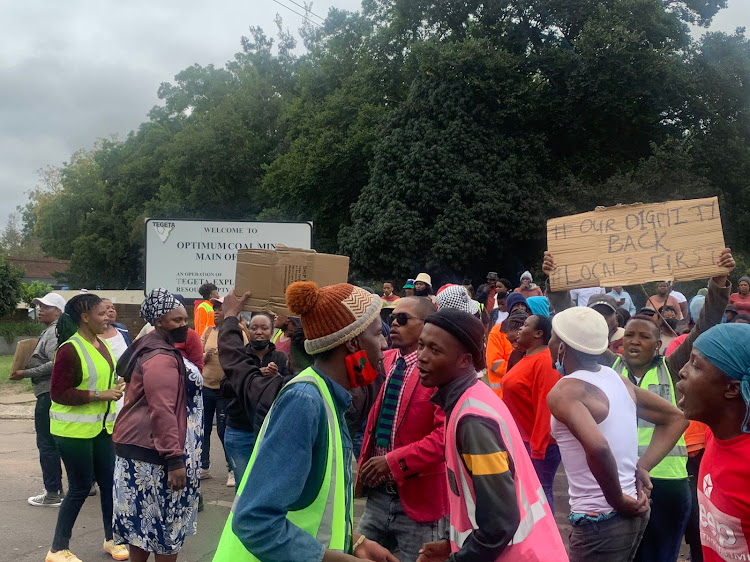 The affected communities say as the case continues in the Pretoria high court, they are becoming increasingly convinced the NPA is not acting in good faith.
Image: Supplied

A group from the communities of Middelburg, Hendrina and Emalahleni marched to Optimum coal mine on Friday to protest against court action over the mine’s future.

“For the past four years we have been watching as the mighty and powerful play football with our livelihoods,” said Mpumalanga Action Movement secretary-general Clifford Masinga.

The Pretoria high court is hearing an application by national director of public prosecutions Shamila Batohi for a preservation order over Optimum, as it was a vehicle through which the Gupta family laundered money.

The former head of the Investigating Directorate, advocate Hermione Cronje, had also lodged an affidavit stating it needs to preserve the mine to prevent the “implementation of a business rescue plan that will also result in the transfer of assets acquired through state capture crimes to one of the original participants of state capture”, the Sunday Times reported.

The community grouping has, however, threatened to occupy and shut down the mine.

“As the court case continues in the Pretoria high court we are becoming more and more convinced that the NPA’s actions are not in the interest of those most affected by the closure of the mine,” said Masinga.

Bongi Mahlangu, the group’s treasurer, said: “ We are tired of the processes that are happening of buying the mine and when a new buyer comes on board, they say it is Gupta-linked.

“The mine must be opened so that we get jobs and business opportunities.

“We don’t care about the Guptas. Let them [government] go and fetch them. We didn’t bring the Guptas, we don’t know how they came to SA. We just knew they bought the mine. They can’t crucify the community for that.

“We are tired. If they want to bring somebody new, we are saying no, as the community we are going to mine ourselves. They must give us funding to buy the mine to operate it. We can’t wait any longer. Poverty does not wait for anybody,” she said.