The IRGC has trained and funded Hezbollah since the 1980s. The IRGC inspired Hezbollah’s logo.

Hezbollah is motivated by its enmity to Israel and rejection to Western dominance in the Middle East, according to the Council on Foreign Relations.

Friday’s assault on The Satanic Verses author in Buffalo was seen by people wearing all black.

Rushdie is on a ventilator, cannot talk, and will certainly lose an eye after being stabbed 15 times by a New Jersey man ‘with Iranian government sympathies’

The Algemeiner writes that ‘Iran in Arabic’ uploaded a photo of Matar next to a photograph of Salman Rushdie with the words: ‘Lebanese hero who stabbed Satan.’ Salman Rushdie attacked Muhammad in The Satanic Verses.

He said, ‘He washed his feet in our high school toilet.’

Sanchez continued: ‘The only time I saw him become ‘hot’ was with our AP Bio instructor at the end of the year when he detested how he spoke about religion.’

‘He was a devoted Muslim, and I recall talking to him about compassion.’ As I remember him, I hope this isn’t him.’

The bleeding Rushdie, 75, was evacuated to the hospital and his agent Andrew Wylie updated his status soon before 7 p.m.

Wylie: “The news is bad.” Salman may lose an eye, his arm nerves were severed, and his liver was pierced.

Rushdie was assaulted and stabbed numerous times during the CHQ 2022 event in Chautauqua, near Buffalo, on Friday.

Matar, who police believe had a pass, walked off stage before being detained as bystanders raced to help Rushdie.

Initial investigations reveal Matar is friendly to the Iranian state and Islamic Revolutionary Guard, despite being born nine years after the fatwa against Rushdie.

Henry Reese, 73, co-founder of an organization that helps persecuted authors, was also assaulted. He and Rushdie planned to discuss the U.S. as a shelter for exiled authors and artists.

Reese was released from the hospital on Friday afternoon and called Rushdie ‘one of the great defenders of free speech and creative expression’ in an email to the New York Times. He added: ‘The fact that this attack could occur in the United States is indicative of the threats to writers from many governments, individuals, and organizations.’

At least 45 people were murdered in protests over Rushdie’s novel in the 1980s, leading to its prohibition in Iran, where the late leader Grand Ayatollah Ruhollah Khomeini called for Rushdie’s death.

Rushdie went into hiding under a British government-funded security program after receiving death threats and a reward. After nine years, he carefully resumed public appearances and continued to criticize religious intolerance. Since 2000, he’s been in America.

LeVan, a Chautauqua regular, claimed the guy ‘was attempting to stab him as many times as possible until he was restrained.’

Professor: “The throng gasped in shock and terror.”

LeVan claimed he was’shaken’ by the tragedy and regarded Chautauqua a safe haven for artistic expression.

‘Knowing and seeing this was horrible,’ he added. “I witnessed intolerance today,” she said. John Stein told ABC the attacker stabbed on the right side of the head and neck. Blood erupted.’ Blood was splattered on the wall and chair behind where Rushdie was assaulted.

A state trooper’stood up and saved his life’ following the incident, she claimed. 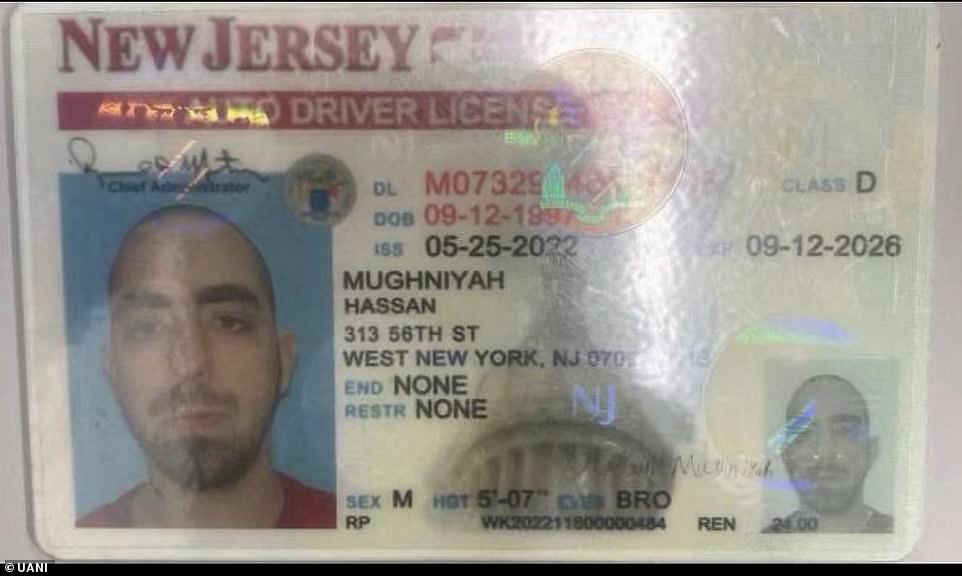 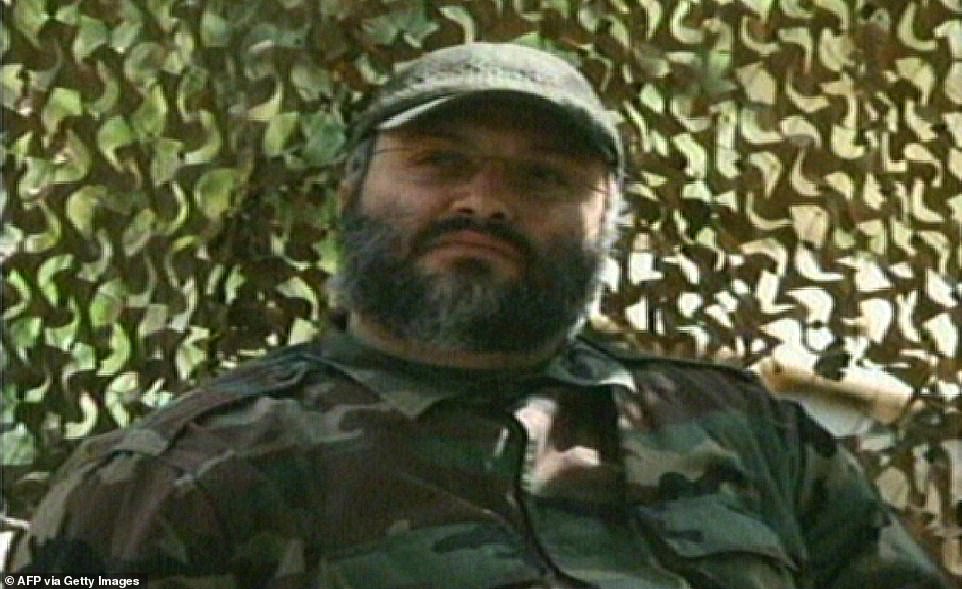 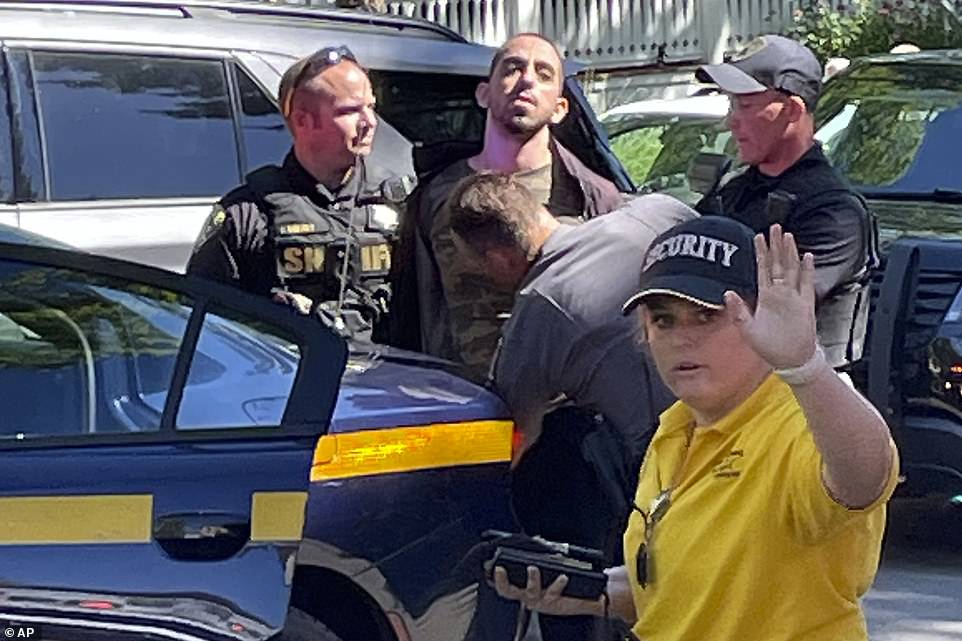 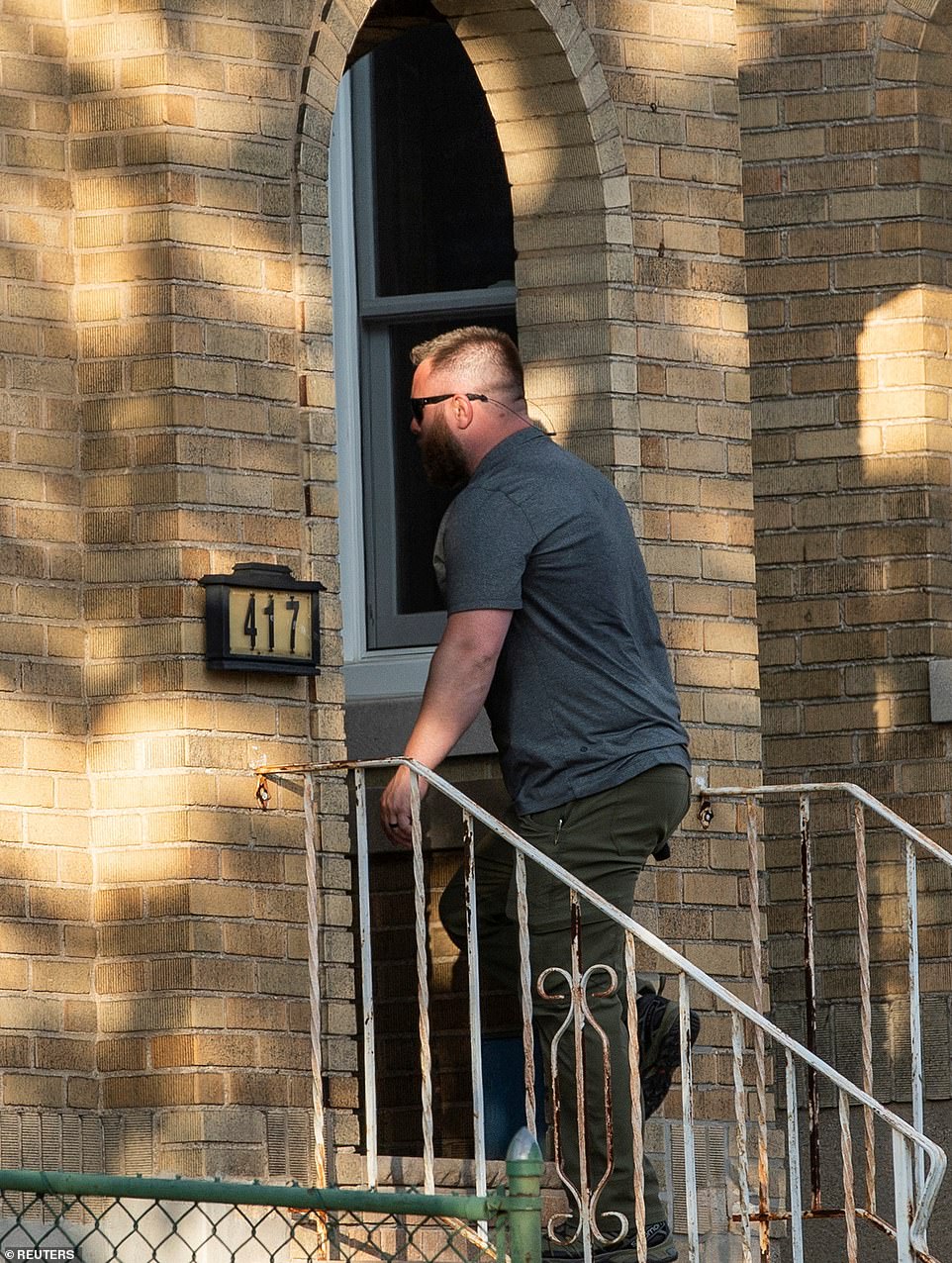 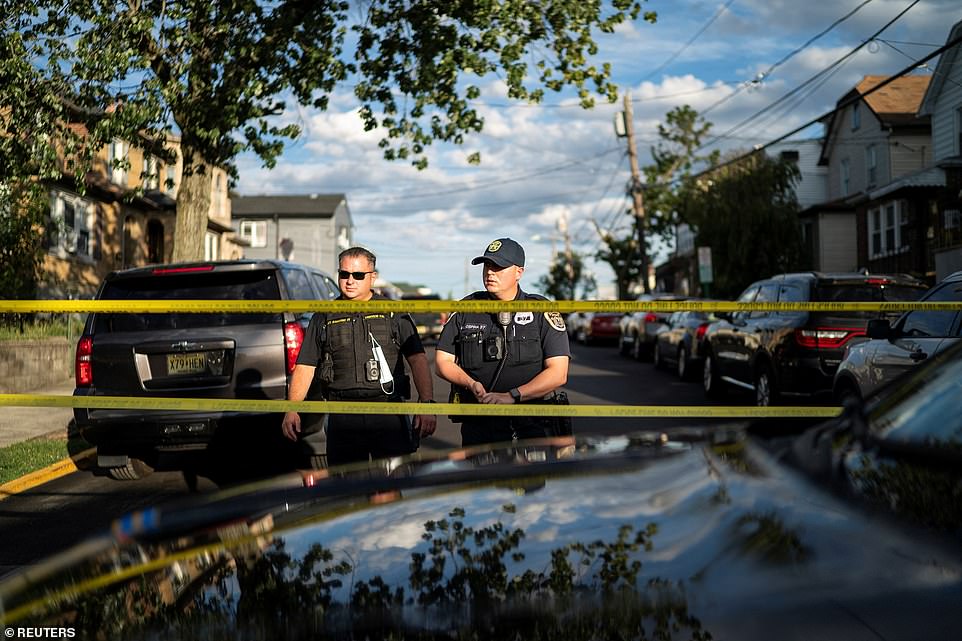 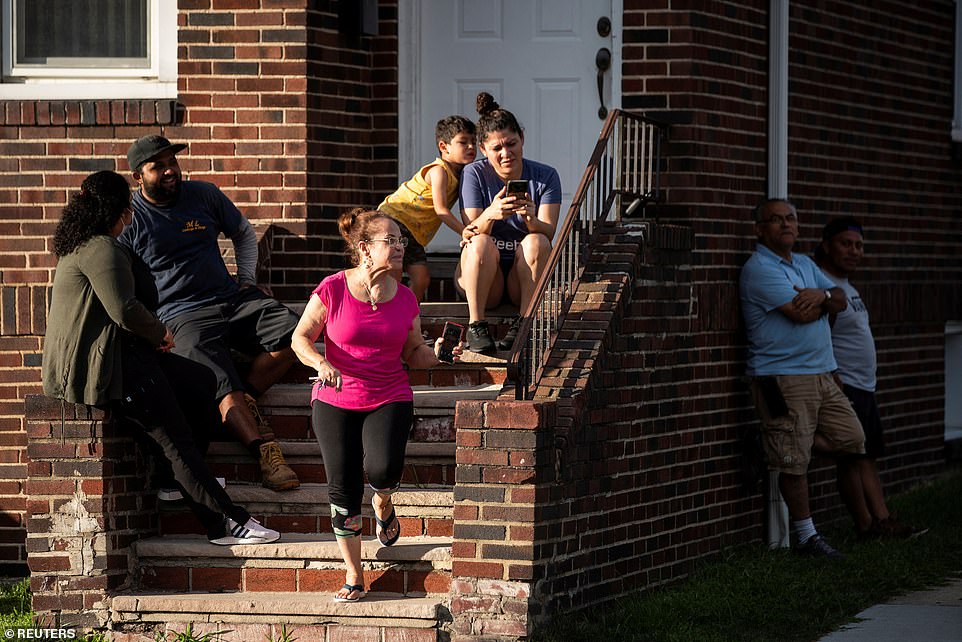 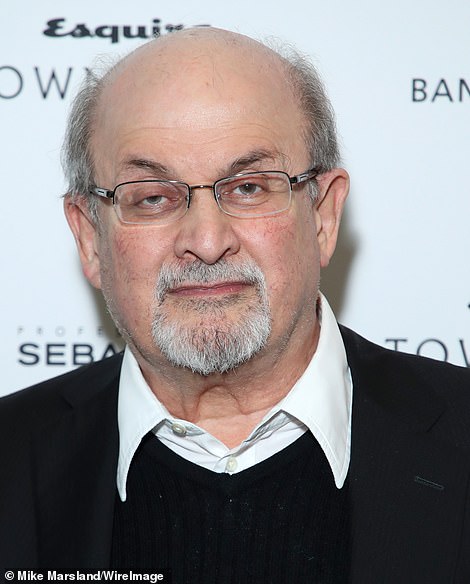 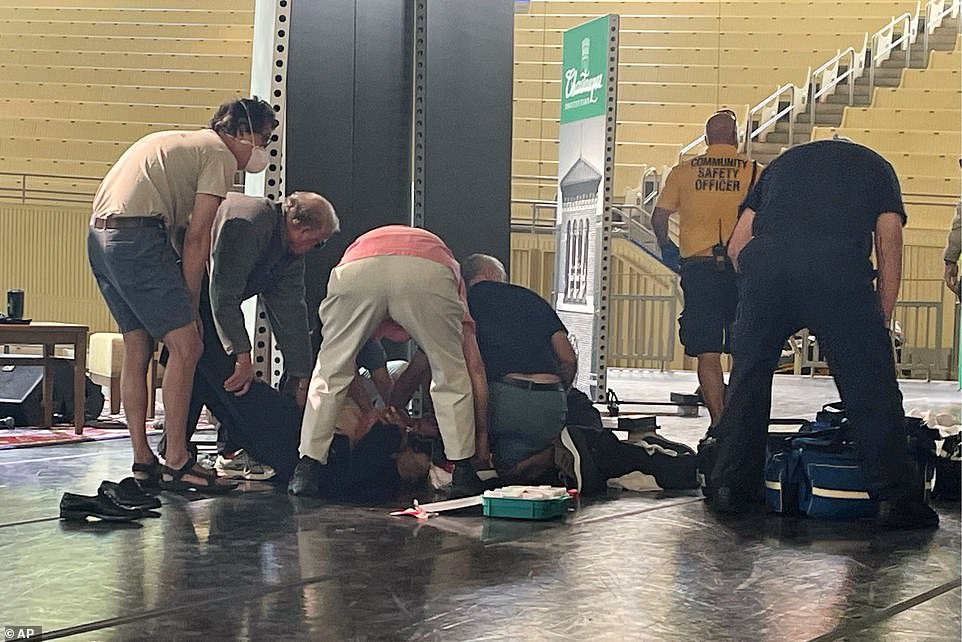 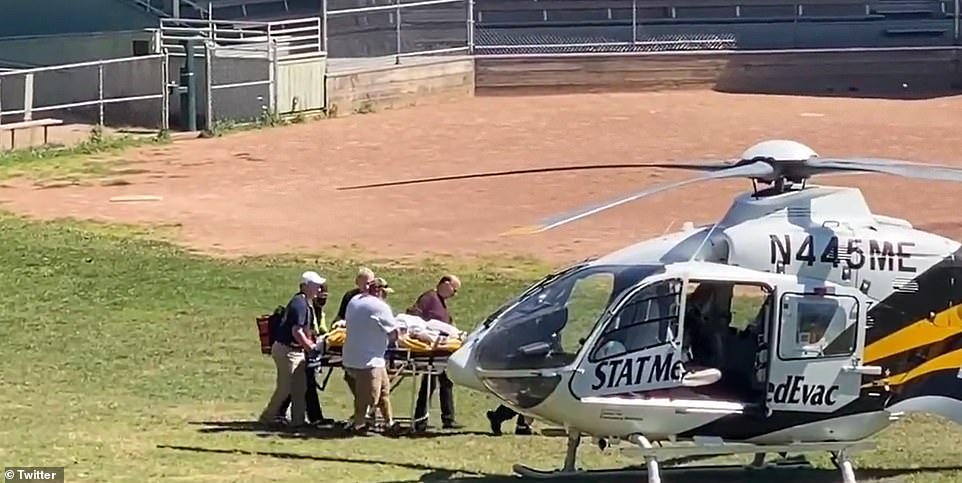 Rita Landman helped after the event and said he seemed alive and didn’t get CPR.

People kept telling Landman, “He has a pulse,” he claimed.

Roger Warner of Cleveland, Ohio, was in the first row when the incident happened.

Blood ran down his face and around his eyes.

Zafar Rushdie, 42, knows about the event.

Thousands in the crowd gasped as his suspected assailant was arrested.

John Bulette, 85, stated there was a serious security breakdown. That someone got so near without intervening was scary.

An usher at the amphitheater said security was ‘loose’ and no extra procedures were taken for Mr. Rushdie’s arrival.

Kyle Doershuk, 20, said, ‘It’s really open, very approachable, and very casual. Something like this was just waiting to happen.’

Chautauqua Institution spokesperson: ‘We have an emergency.’ I can’t say more now.

The assault lasted 20 seconds, according to Rabbi Charles Savenor.

He remarked, “This man rushed on stage and beat Mr. Rushdie.” What’s going on?

In seconds, it was evident he was being thrashed.

Iranian interests division at Pakistani embassy in D.C. refused to comment on incident.

The embassy represents Iran in the U.S.

They informed the New York Times, “We’re not participating,” then hung up without giving a name.

Senator George Borrello called the attack’shocking’ and said there is ‘no tolerance’ for ideas that advocate killing dissenters.

This appalling assault on a famous novelist, evidently motivated by religious fanaticism, has no place in America, he continued.

Boris Johnson was ‘appalled’ that Sir Salman Rushdie was stabbed while exercising a right.

His family is in my thoughts. Hope he’s alright.

Ian McEwan said of Rushdie’s attack, ‘This horrible attack reflects an assault on freedom of thought and expression.’

These freedoms underlie our rights and privileges.

Salman is an inspiring champion of oppressed authors and journalists.

He’s a guy of great skill and bravery who won’t be discouraged.

Tony Blair knighted the novelist in 2007 for’services to literature’

His latest article was an assassination attempt novella serialized on Sub Stack called The Seventh Wave.

Rushdie got death threats for The Satanic Verses, which attacked the Prophet Mohammed and the Koran.

His Satanic Verses provoked a cultural war in Britain in 1988, with demonstrations and book burnings.

Pakistan banned the book, and Iran’s Ayatollah Khomeini imposed a death sentence in 1989.

Khomeini asked for Rushdie’s execution and urged Muslims to point him out to those who could kill him if they couldn’t.

The fatwa followed book burnings in Britain and riots throughout the Muslim world that killed 60 and wounded hundreds.

A $3million reward was placed on Rushdie’s head from 1989 until 2002, costing the British government.

He went into hiding for a decade with police protection and says he received a’sort of Valentines card’ from Iran each year reminding him of the pledge to murder him.

In 2012, a semi-official Iranian religious charity increased the prize for Rushdie.

After the incident, a small group of people lifted up Rushdie’s legs to send more blood to his chest.

The author once complained about ‘too much’ security.

He told reporters at the Prague Writer’s Festival, ‘It’s humiliating to have that much security surrounding me.’

It was unneeded, exorbitant, and not at my desire.

‘Before coming here, I said I didn’t want it.

So I was astonished to come and see a large operation; it felt like I had gone back many years.

Rushdie is a former president of PEN America, whose current CEO Suzanne Nossel said: ‘PEN America is reeling from shock and horror at word of a brutal, premeditated attack on our former President and stalwart ally, Salman Rushdie, who was reportedly stabbed multiple times while on stage in upstate New York.

We can’t recall a similar brutal assault on an American writer.

‘On Friday morning, Salman contacted me to assist put Ukrainian authors in danger.

Salman Rushdie has been attacked for decades yet has never failed. He helps weak and threatened people tirelessly.

‘When we don’t know the origins or intentions of this vicious attack, all those who have met speech with violence or advocated for the same are accountable for legitimizing this assault on a writer while he was communicating with readers.

We wish Salman a complete and swift recovery.

We hope and trust he won’t be silenced.

Hitoshi Igarashi was stabbed to death on the campus where he taught literature.

Ettore Capriolo was stabbed at his Milan residence.

William Nygaard, the novel’s Norwegian publisher, was shot three times outside his house in 1993 but survived.

Aziz Nesin, the book’s translator, was targeted in an arson assault in Turkey that killed 37.

During the fatwa, he lived in constant fear and assumed his ex-wife Clarissa Luard and his 9-year-old son Zafar had been slain or abducted.

In 1998, Iran’s reformist president eased the fatwa and stated it wouldn’t murder Rushdie.

Technically, it still remains, but enforcement is improbable.

Index on Censorship, a free speech group, stated money was donated to increase the prize for his execution in 2016, proving the fatwa for his murder still persists.

His second kid is named Milan. He has been connected to various women, including Indian model Riya Sen.

Prince Charles allegedly declined to defend the author during his fatwa because the book offended Muslims.

Martin Amis wrote in Vanity Fair that the Prince’s opinions generated a ruckus at a dinner gathering when Islamic clerics sentenced Rushdie to death in 1989.

Charles informed Amis he wouldn’t support someone who undermines their fundamental principles.

Charles ‘took it on board’ when Amis remonstrated, even though Rushdie is British-Indian.

Rushdie has talked at the Chautauqua Institution, 55 miles southwest of Buffalo.

He met his first wife, Clarissa Luard, at a UK pop performance in 1969; they married in 1976 and had Zafar three years later.

Rushdie allegedly stayed at her side when she died of breast cancer at age 50 in 1999.

Rushdie was with Wiggins when he faced blowback for The Satanic Verses, stating his ‘Jewish wife’ pushed him write it.

‘The Islamic side alleged the Jews made me do it,’ Rushdie said. My [second] wife was Jewish, they alleged. She’s American.’

Wiggins hid after the divorce in 1993, and Rushdie married Elizabeth West the following year; they had Milan in 1999.

Rushdie claimed he and West grew apart when he wanted to relocate to the US and she wanted to remain in the UK and have another kid.

The couple parted in 2004 after a miscarriage. Rushdie married Top Chef presenter Padma Lakshmi in 2004 after splitting from West.

They met at a Tina Brown party in 1999. Lakshmi claims they had an affair during the party and Rushdie vowed to be with her once his marriage to West ends.

Rushdie dedicated Fury to Lakshmi. Rushdie was 51 when Lakshmi was 28.

Rushdie’s previous marriages lasted more than a decade, but his relationship with Lakshmi lasted barely three years. In his book, he called her a ‘poor investment’ who was too selfish and ambitious.

Lakshmi called Rushdie’sexually desperate’ and inconsiderate to her endometriosis.