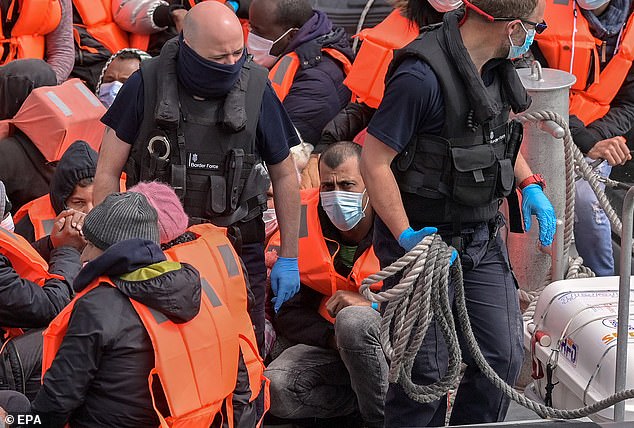 A gang of migrants launched a decrepit rubber dinghy off the coast of Calais early Thursday to cross the English Channel.

They were reclining in warm beds in a comfortable West London hotel by nightfall that evening, owing to some assistance from the French government, and their bellies were full thanks to the kindness of the British taxpayer.

Despite the Government’s ambitious plans to send migrants to Rwanda for processing — a move aimed in part at reducing Britain’s attractiveness as a destination for illegal migration — the flow of dangerous and overloaded boats towards the white cliffs of Dover continues, bolstering the traffickers’ coffers.

More than 7,000 migrants have landed in England by sea this year alone.

And, as reports surface that the number of people processed in Rwanda may be significantly lower than projected — as few as 300 per year, according to one Home Office model — fears are being expressed that the plan may actually increase the number of people crossing the Channel in the near term.

Thousands of Iranians, Iraqis, and African nationals in France are being told to ‘cross swiftly’ this summer in order to gain refuge in the United Kingdom before the Rwanda flights begin, according to a French MP.

The Mail has also learned that 25 migrants held in a hotel in the north of England have fled to live illegally in the United Kingdom in order to avoid being deported to Africa.

Two teenage Iraqi Kurds residing in a former Army barracks in Kent also boasted that they had paid £3,200 on boat “tickets” from France to England. These joked that they weren’t tickets to Rwanda. If the authorities sought to deport them to Africa, the two swore to refuse.

What about the 23 migrants whose “express” journey to England was followed by the Mail this week?

Their journey began on a beach near Gravelines, 15 miles from Calais, at about 1 a.m. British time on Thursday.

The migrants gathered at the pre-arranged spot, their dinghy and outboard engine having been delivered there by traffickers.

FS Laplace, a French government vessel apparently patrolling the Calais coast to interdict migrant boats and turn them back, located their boat 90 minutes after they pushed out.

The Mail was able to monitor how the French ship ceased its patrol and began moving towards the migrants’ dinghy as it traveled north towards the English coast using ship-tracking software.

The FS Laplace then shifted course to English waters, away from Calais, and began escorting the migrants to Dover.

FS Laplace met the British Border Force vessel Hurricane in the middle of the Channel at 6.07 a.m. to organize a transfer of the 23 migrants.