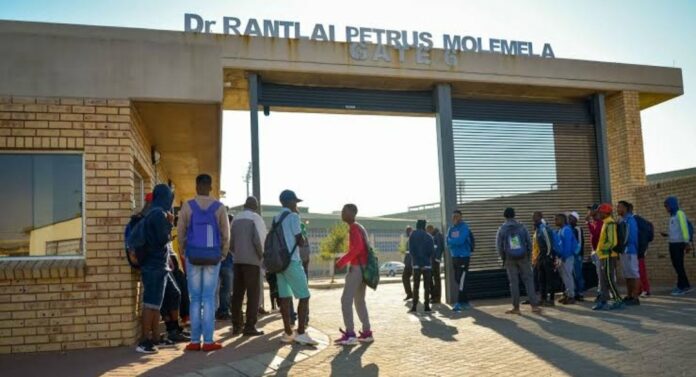 A location designated to host the ANC’s January 8 celebrations in the Free State city of Mangaung is in shambles.

This letter, which we have seen, states, “This report is intended to inform the event owner of the deficiencies of the Dr. Rantlai Molemela Stadium in preparation for the ANC January 8 event.” The following deficiencies were discovered during the inspection, which might render the stadium non-compliant.

After construction, the northern section of the stadium sank. Even when the correction report has been submitted, it must continue be sent to a structural engineer for periodic evaluation.”

Motlashuping stated that the stadium’s ablution facilities had been vandalized and that there is no flowing water for restrooms and faucets. In addition, he noted that the VIP waiting areas that will house key ANC leaders have been vandalized.

“Given the foregoing and the municipality’s financial situation, it will be difficult for the municipality to implement corrective measures in a short period of time. Additionally, this will prevent the town from issuing a grading certificate for the event.”

Despite safety concerns being brought to the notice of the ruling party, ANC president Cyril Ramaphosa, secretary-general Fikile Mbalula, and top party leaders have insisted that Sunday’s gathering may take place at the venue in question.

“The ANC will proceed with the January 8 festivities at the Dr. Rantlai Molemela Stadium,” stated Oupa Khoabane, interim provincial committee spokeswoman for the ANC in Free State.

“Many organizations and churches have held events in this stadium; the ANC will follow suit. Engineers have confirmed that the venue can still accommodate the anticipated number of guests. “We will bring portable toilets and water to accommodate the attendees of the celebrations.”

The spokesperson for the City of Mangaung, Qondile Khedama, did not respond to questions posed by the Sunday World; however, he told NewzRoom Africa, a 24-hour digital satellite television news channel, that heads will roll once the municipality has concluded its investigation into how the confidential letter was leaked.

At the time of publication, ANC national spokesperson Pule Mabe did not answer to queries given to him.

This is an evolving tale…