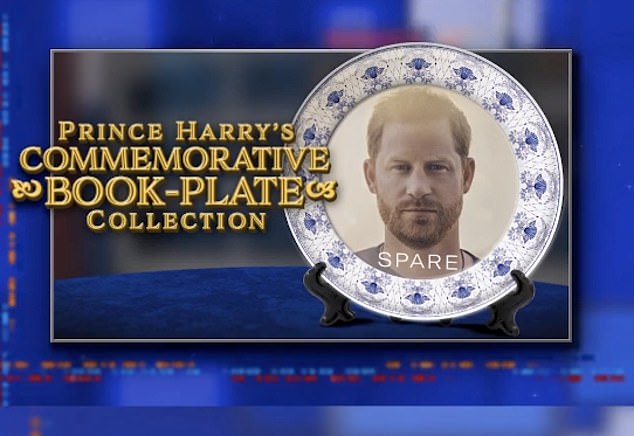 Prior to tonight’s US TV appearance, Stephen Colbert made fun of Prince Harry and his memoirs, comparing his life to that of Harry Potter and making jokes about how the new book can be purchased as a royal commemorative plate.

After being ushered into the studio by armed bodyguards yesterday, the Duke of Sussex was addressed as “His royal Harryness” and was also spotted downing tequila shots during an appearance with The Late Show in New York.

The transatlantic television promotion for Harry’s brand-new memoir, Spare, which is out today, is coming to a close. He has revealed personal information in a number of interviews in the US and the UK, including how he lost his virginity, how he used narcotics, how he killed 25 Taliban, his private chats with his family, and the growing schism over Megxit.

However, even the typically sympathetic liberal US media has grown weary of Prince Harry’s gripes. The Left-wing, anti-British New York Times described his comments as “repetitive and boring” and said that US opinions about the Sussexes “seem to be changing.”

Additionally, in a preview for tonight’s episode, Stephen Colbert seems more intent on making fun of the prince and his contentious relationship with his brother, as well as biting jokes about Britain and the royal family, particularly the late Queen.

The Late Show host continued, to roars of amusement, after showing a clip in which Harry recalls his anguish over William attempting to avoid him at Eton: “That’s horrible.” despite being placed in the same home by the magic hat, his elder brother ignored him at school. How do you feel? Hufflepuff? Gryffindor?’

A second teaser made fun of Harry and other royals whose weddings and anniversaries are commemorated with limited-edition plates and crockery by joking that Spare is available in hardback, audiobook, and “commemorative plate.”

Finally, Colbert makes another joke about Harry and the Royal Family, including the Queen, saying: “Stock up on corgis and take a valuable cultural item from one of your colonies because The Late Show is going imperial.”

The prince has decided to go on The Late Show, and it seems that he will be turned into a laughing stock after a string of serious TV interviews that, according to some critics, failed to adequately address discrepancies in his book.

Harry’s book also includes incidents that seem to make fun of his own family, including hanging a Christmas tree ornament with a Queen figurine.

According to Spare, Meghan bought a Queen-themed ornament and delivered it to Harry. The ornament was purchased locally in California.

It resembled “Granny’s face to a T,” according to Harry, who put it upright on their big Christmas tree in California.

Archie, the toddler, knocked over the tree stand when he was running about, causing the ornament to fall off and shatter into fragments.

Because Diana was ‘giggling’ at Archie breaking the ornament, Harry said he sought assistance from a psychic who claimed she could demonstrate she was speaking to his deceased mother from beyond the dead.

As she recalled the’surreal’ moment she first saw the Queen – executing a much exaggerated curtsey in front of her awkward-looking husband, Prince Harry – in the couple’s Netflix documentary, Meghan, grinning, seemed to ridicule her own attempts at adhering to royal procedure.

In it, the Duchess of Sussex likened meeting Her Majesty for the first time to a tacky themed dinner at ‘Medieval Times’ in the United States. Her husband, who served in the Army under the Queen as his supreme commander, was uneasy throughout.

Prior to tonight’s US broadcast of The Late Show, Harry was seen downing tequila shots during an interview with Stephen Colbert from The Late Show yesterday.

The Duke of Sussex responded to a number of questions from the late-night presenter in his Colbert Questionert segment, according to fans who saw the filming at the Ed Sullivan Theater in New York City.

The liberal comedian and TV broadcaster created a test with 15 questions that, in his words, “cover the complete range of human experience.”

His guests are asked a variety of things, such as what their favorite sandwich is, which smartphone app they use the most, and even the number Colbert is now thinking about.

It is unknown what Harry said in response, but employees at the studio were able to record a brief clip of the scene in which he was speaking while double-parking and consuming two tequila shots.

The interview is only the most recent thing the Duke has done to support the Tuesday publication of his shocking memoir, Spare.

A security officer who was carrying Harry’s pistol and ammo as well as a Glock lock-box followed him to the Late Night studios on Monday night.

Since relocating to the United States, the prince has expressed a growing anxiety for his security and a regular sense of vulnerability.

After being prohibited by British law from traveling with private armed guards, he filed a lawsuit against the British government.

The duke said in court documents that he “does not feel secure” in Britain without armed protection and that the decision to bar him from having armed guards with him is “illegal” and “unfair.”

He was furious because he lost his official, taxpayer-funded security detail when he left his position as a working member of the royal family.

He has said that one reason for wanting to make lucrative agreements in the U.S. is to pay for private armed protection, such as his book, for which publisher Penguin Random House allegedly gave him a $20 million advance. The arrangement is for four editions, with a $35m–$40m price, according to ET Canada, who quoted an even more lavish figure.

Harry arrived to Colbert’s studios on Monday wearing in a gray suit and a navy shirt. Colbert had earlier tweeted that the interview will run on Tuesday night.

The interview, which coincides with the publication of Prince Harry’s new book, Spare, will be his first appearance on The Late Show with Stephen Colbert, CBS said.

Spare is a major work filled of insight, revelation, self-examination, and hard-earned knowledge on the enduring power of love over pain, the PR team said.

As a “spouse, parent, humanitarian, military veteran, mental health champion, and environmentalist,” they defined Harry. With his family and three dogs, he lives in Santa Barbara, California.

The prince was seen earlier on Monday leaving his opulent Manhattan hotel, where suites cost $3,500 per night and rooms start at $400.

His wife and kids, who are said to be at home in California, were nowhere to be seen.

Harry said he probably wouldn’t ever go back to live in the UK when he appeared on Good Morning America on Monday morning.

He continued in his constant criticism of the British press, which had been the focus of most of his promotional tour, and said that if they ever returned to Britain, their life would be “unsurvivable” due to the press’s attention.

He said to Strahan, “I don’t believe that, even if there was an agreement or a plan between me and my family, there’s that third party [the British press] that’s going to do all they can to make sure that it isn’t achievable.”

Not preventing us from returning, but making it impossible to survive.

The Duke’s family is thousands of miles away from Harry and Meghan, 41, who moved from the UK to California in early 2020. Since early 2021, they have been raising their two children, Archie and Lilibet, in a $14.65 million property in Montecito.

Harry has acknowledged that he doesn’t think they will ever return to the UK or the royal life on a full-time basis, but he has also suggested that he and Meghan would never renounce their formal titles.

In an interview with 60 Minutes on Sunday, Cooper questioned why, if they want a quiet life away from the spotlight, they did not give up their titles as Duke and Duchess.

One of the complaints you’ve heard is that you should go to California and take a break from your institutional job, Cooper remarked.

“Why be so visible? Why would you divulge talks you’ve had with your brother or father?

You claim to have attempted to accomplish this in secret.

Every every time I’ve attempted to do it secretly, there have been leaks, briefings, and rumors planted against me and my wife. Harry retorted.

The family’s credo is “Never complain, never explain,” you know.

However, it is just a motto. And it’s not truly true.

The pair first shocked the public by announcing that they will abdicate their throne on January 8, 2020.

They said in a joint statement at the time that it had taken them “many months of contemplation and internal talks” to come to their conclusion.

They said that their goal was to “strive for financial independence while still providing Her Majesty The Queen with the most assistance possible.”

However, because of a number of interviews and a documentary in which they denounced the behavior of their family members and the institution they stand for, the concept of them working to support the rest of the family has become more unsustainable.

After the couple released their shocking Netflix docuseries, which included numerous explosive charges about their time as royals, 98 percent of respondents to a survey conducted in December said that they wanted the couple to lose their titles as Duke and Duchess of Sussex.

The two claimed in the series that they had been the victims of “institutional gaslighting” and that the royals had lied to shield Harry’s brother Prince William.

Although it seems that is no longer the case, Harry also claimed in the series that he informed his father, King Charles II, that he and Meghan were prepared to renounce their titles amid conversations around their intention to come to America.

Although the King and Prince William have declined to comment on Harry’s mud-slinging and accusations, his book has created considerable distress inside Buckingham Palace.

In the book, Harry details claims that William physically assaulted him and that he and Meghan were at odds with William’s wife Kate.

He said he asked his father not to wed Camilla and charged the current queen consort with spreading rumors to further her “campaign” to get formal recognition.

The prince spoke in detail about shooting Taliban terrorists while serving with the British troops in Afghanistan, losing his virginity, and using cocaine and other narcotics.

He said that his brother and father had “absolutely no inclination to reconcile,” and he did not believe that “keeping quiet” would be of any use.

After his vicious assault on Camilla, would Harry and Charles be able to find a way to return? In Tom Bradby’s sit down, Prince accused the Queen Consort of plotting to wed his father despite the King having warned him that doing so was a “red line.”

After Anderson Cooper questioned Harry and Meghan about why they don’t surrender their royal titles and live in seclusion during their explosive 60 Minutes interview, Harry said he and Meghan would NEVER do so: What difference would that make, snarls Prince.

In a retaliatory ITV interview, Harry claimed that the royal family were “awful” to him on the day that the Queen passed away.