Skip to content
Go Home «» News «» Breaking News «» The irony of it all, according to critics of Rebel Wilson’s travel to Dubai after coming out 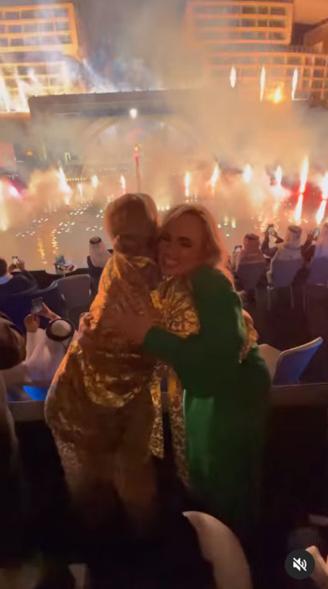 Rebel Wilson, who came out as a member of the LGBTQIA+ community last year, is being criticized online for marketing her extravagant trip to Dubai in light of the UAE’s ban on homosexuality.

The actress and her fiancée, Ramona Agruma, were criticized over the weekend for coming to the Middle Eastern country to attend Beyoncé’s concert at the opulent Atlantis The Royal hotel.

“The Royal Atlantis is BEYOND! What a weekend with Beyoncé! @atlantistheroyal,” Wilson, 42, captioned an Instagram video of the two enjoying the hotel’s amenities, dining on gourmet food, and dancing at the singer’s concert.

The “Pitch Perfect” star was swiftly criticized in the comments section of Wilson’s Instagram post for visiting a country where same-sex sexual behavior is punishable by the death penalty.

“So… any updates on the LGBTQ situation there?” one person inquired directly.

“Gee Rebel. You are aware that homosexuality carries the death penalty in Dubai, correct? Supporting such a country is quite impolite, especially for a member of that community, argued a second individual.

“Civil rights? LGBTQ? Unfollowing now,” wrote a third person, and a fourth added, “Oh, the Privilege. What about other LGBT individuals?

Others criticized Wilson for accepting a free trip to a country where homosexuality is illegal.

Wilson was criticized for flaunting her travel to the United Arab Emirates, where being a member of the LGBTQIA+ community is banned.

“Are you not a part of the LGBTQ+ community? The hypocrisy of it all,’ remarked another user.

“I am really enraged by this. Rebel does not aware that, according to UAE legislation, same-sex sexual behavior is punishable by death! Why is Rebel displaying this advertising to her LGBTQ fans?!!”

The actress has utilized social media to promote her luxurious stay at the Atlantis The Royal hotel.

Sunday, Wilson and Agruma co-hosted the inauguration of Nobu by the Beach at the Royal, according to Page Six.

According to our sources, the two did not appear to engage in PDA at the occasion.

While Wilson’s most recent Instagram post was met with scathing criticism, Agruma’s pictures of the couple’s journey received an abundance of positive feedback.

“Looking lovely ladies,” said one admirer, while another added, “You are both stunning. Ramona… You killed it with this outfit.”

The “Senior Year” actor and actress looked to have flown to the contentious location with their surrogate-born daughter, Royce Lillian, who was born in November. Wilson posted an Instagram Story snapshot of herself holding a baby on a rooftop pool deck overlooking the city.

In June 2022, the Australian actress came out while concurrently confirming her romance with Agruma. Since making their relationship public, the couple has traveled the world together and engaged in public displays of affection.

Aside from her trip to Dubai, Wilson has reportedly been an ally to the LGBTQIA+ community. In December, she even discussed how kissing a woman for a film part altered her life.

Wilson’s representatives did not immediately answer to Page Six’s request for comment on the criticism she has gotten for her international trip.

»The irony of it all, according to critics of Rebel Wilson’s travel to Dubai after coming out«