Skip to content
Home » News » News » The inflation rate has reached a FORTY-YEAR high of 11.1 percent 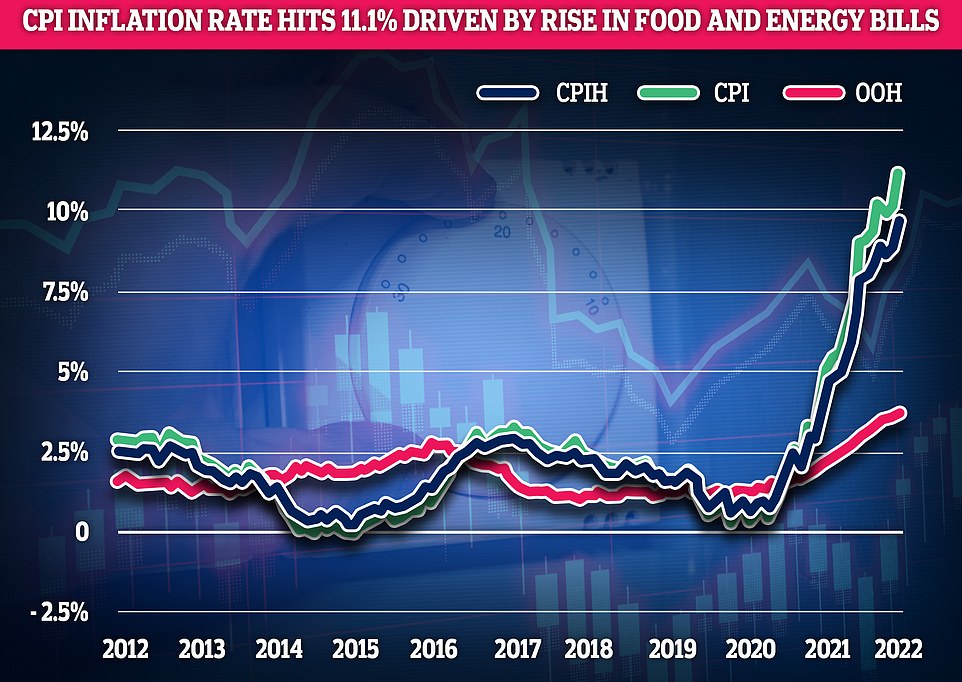 Inflation in the United Kingdom increased to 11.1% in October, and analysts warn that it may not have yet reached its high due to the rising costs of power, gas, food, and diesel.

The grim number is the worst in more than four decades and has increased from 10.1% in September – substantially worse than the 10.7% experts had predicted.

In October, the ONS reported that the inflation rate for housing and household services, which includes gas and electricity, was 11.4%, equal the previous record set in 1950.

The ONS calculated that if the government had not subsidized utility costs this winter, inflation could have reached 13.8%.

And ahead of tomorrow’s Autumn Statement, Jeremy Hunt cautioned that bringing inflation under control will require “difficult but essential decisions on tax and expenditure to help balance the books,” describing inflation as “an insidious tax that eats away at pay cheques, household budgets, and savings.”

‘It is our obligation to assist the Bank of England in their aim to return inflation to target by dealing responsibly with the nation’s finances,’ he added, adding that the situation was “preventing any prospect of long-term economic progress.”

And in more bad news, merchants cautioned that “there are few indications that the cost-of-living issue will abate in the near future” as they intensified appeals for assistance from the Chancellor.

ONS Chief Economist Grant Fitzner commented on today’s inflation numbers for October, stating, “Despite the Energy Price Guarantee, rising gas and electricity costs propelled headline inflation to its highest level in over four decades.” In the past year, gas prices have increased by around 130%, while electricity prices have increased by almost 66%.

Increases in a variety of food goods also contributed to inflation. These were largely countered by motor fuels, when average petrol prices fell and diesel prices soared, resulting in the largest price gap between the two fuels on record.

Further evidence suggests that company costs are increasing at a slower rate, driven by crude oil and petroleum

Inflation in the United Kingdom increased to 11.1% in October, considerably beyond what experts had projected.

This graph illustrates how inflation affects personal finances. By a wide margin, housing and home services, which includes energy bills, have risen the most. Food and alcohol prices are also rising rapidly. Transport prices are the only ones declining significantly.

Jeremy Hunt, the Chancellor of the Exchequer, blamed the impact of the epidemic and Vladimir Putin’s conflict in Ukraine for the increase in costs as he cautioned that ‘difficult’ decisions on tax and expenditure will be required in Thursday’s fall statement.

He stated, “The aftermath of Covid and Putin’s invasion of Ukraine is driving up inflation in the United Kingdom and around the globe.”

It is our responsibility to assist the Bank of England in their objective to return inflation to target by managing the nation’s finances properly. This necessitates difficult but necessary tax and spending decisions in order to balance the books.

High inflation makes long-term, sustainable growth impossible. Tomorrow, I will outline a plan to reduce debt, maintain stability, and reduce inflation while safeguarding the most vulnerable.

Retailers have expressed concerns that the situation would worsen.

Helen Dickinson, chief executive officer of the British Retail Consortium, stated, “Many customers are eagerly expecting Black Friday specials and other promotions in the lead-up to Christmas, as they prepare to purchase gifts and holiday goodies.”

‘Unfortunately, there are few indications that the cost of living problem will soon abate.

“Tomorrow, the Chancellor will introduce the autumn budget, when he will have the opportunity to provide assistance to suffering people and alleviate some of the burdens placed on merchants and their suppliers, which put upward pressure on pricing.

From April 2023, business rates for retailers will increase by £800 million per year, necessitating immediate government action to reduce this and avert even higher inflation in the next year.

In the year leading up to September, wages increased at a record rate, but were still surpassed by the rising cost of living.

According to the Office of National Statistics, regular weekly salary increased by an average of 5.7%, the highest increase outside of the epidemic since records began in 2001.

However, with inflation at a 40-year high, the majority of families continue to feel the pressure.

While private sector compensation increased by 6.6%, public sector pay, which includes physicians, nurses, and civil workers, increased by only 2.2%.

Real wages, which account for inflation, were 2.7% lower than a year earlier.

The number of long-term sick was 2.5 million, an increase of more than 465,000 since before the pandemic.

It comes at a time when nurses, teachers, and other public sector employees are all preparing to strike over inadequate salary increases.

Next year, nurses will receive an average raise of 4.75 percent, but they argue that they should earn more because their compensation has not kept pace with the rising cost of living for several years.

In an effort to maintain a lid on inflation, he also asked private corporations to rein in executive pay, which often reaches millions of pounds for top chief executives.

He stated to GB News, ‘Everyone will be asked to give more. However, we will ask those who have more to donate considerably more.’

As of September of this year, real pay, which takes inflation into account, is down 2.7% compared to September of previous year.

Nurses (file photo) and other public sector employees are threatening to go on strike over inadequate salary increases.

The Chancellor, Jeremy Hunt, has stated that combating inflation is his “top priority.”

I understand that people’s hard-earned money isn’t going as far as it should, said Chancellor Jeremy Hunt.

As he prepares to release his Autumn Statement tomorrow (THU), outlining plans to fix the hole in the public finances, he added: ‘Tackling inflation is my top priority, and it will inform the difficult decisions on tax and expenditure that we will make on Thursday.

Mr. Hunt, however, attributed the skyrocketing increase in the cost of living to the situation in Ukraine, which has pushed up the prices of oil and other commodities such as grain.

He stated, “Putin’s illegitimate war has caused inflation to rise, a hidden and insidious tax that eats away at wages and savings.”

»The inflation rate has reached a FORTY-YEAR high of 11.1 percent«