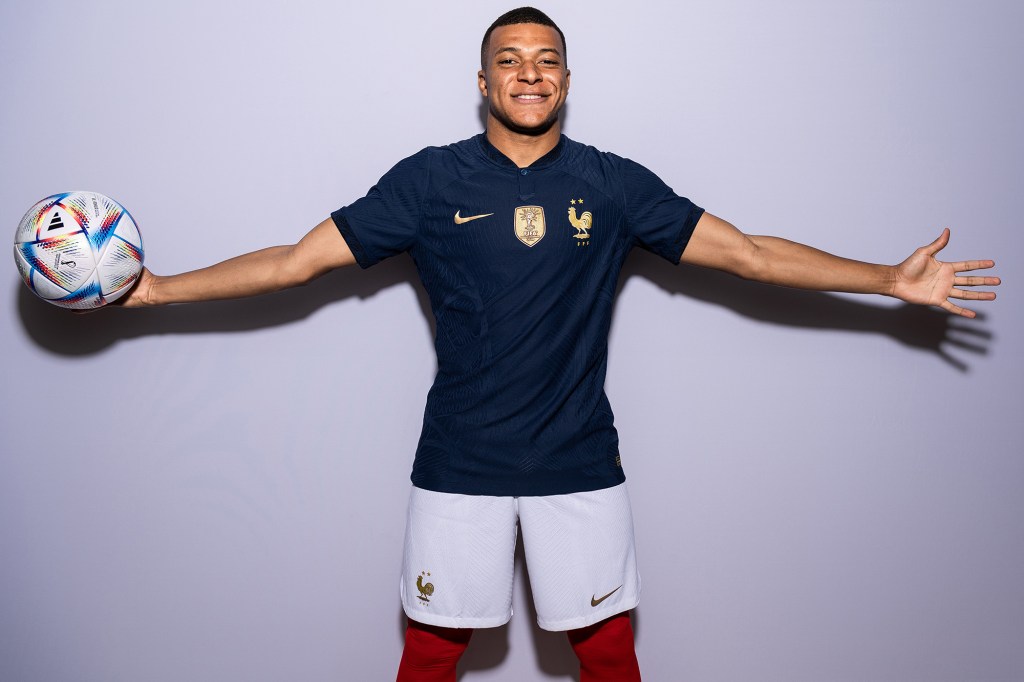 Each country that qualifies selects its own kit manufacturer. Nine brands were selected throughout the 32 qualifying nations. Adidas, Nike, and Puma manufactured 26 of the 32 kits, while six smaller businesses manufactured the remaining six. Let’s evaluate the top five and worst five 2022 World Cup uniforms.

A nice Nike-made kit traveled to France. The home kit is basic and traditional, with a prominent blue hue for “Les Bleus” and gold highlights for the crest. The away jersey is magnificent, with a white backdrop and French iconography such as the Arc de Triomphe and the Clairefontaine youth school woven into the shirt.

Kylian Mbappe poses in one of France’s 2022 World Cup uniforms during a picture session on November 17, 2022 in Doha, Qatar.
FIFA via Getty Images
Argentina

The first Adidas uniform on this list is Argentina’s. The white home shirt with sky-blue stripes down the front and black accent stripes on the neck and shoulders stays unchanged from previous World Cups. There is no way to go wrong with Argentina’s traditional home jerseys. However, their away uniforms have garnered considerable attention.

Argentina will wear a purple uniform for the first time in its history, with a flaming graphic on the bottom half of the shirt inspired by the Sun of May on its national flag.

“The new away kit for the national team sends a strong message of gender equality, in line with the brand principles of diversity and inclusion,” said Pablo Lamo, general manager of Adidas Argentina. “Through sports, we have the chance to influence people’s lives, and soccer is one of the most effective vehicles for doing so.”

Adidas created waves with Japan’s outfit, particularly their home shirt. The home kit is blue with red shoulder stripes and red side panels. The design on the front features white-lined origami cranes. That alone would be plenty for a nice kit, but the away kits complete the ensemble. The away kits are similar to the home kits in that they include origami cranes, but this time the cranes are composed of blue and red lines and are located on the shoulders of a white shirt with black pinstripes.

On November 15, 2022, Daichi Kamada of Japan poses for a photograph in Doha, Qatar.
FIFA via Getty Images
Mexico

Mexico may have the best uniforms in the competition. Their home shirt is green with red pinstripes on the tops of the shoulders, but the front design is what makes this shirt special. The design is a scaly, serpent-like pattern inspired by Quetzalcoatl, a figure from Mexican mythology. Not to be outdone, the away kit is white with a maroon graphic that covers the majority of the front of the jersey and is inspired by the Mayan feathered serpent, which symbolizes the marriage of earth and heaven.

Another Nike appearance concludes the list of the greatest. While most nations have a consistent color for their home kit, Saudi Arabia chose to use a white jersey. In addition to pictures of palm palms on the front of the jersey, the left breast of the garment bears the Saudi Arabian football emblem. The away shirt is a brilliant shade of emerald green with a jagged design that covers the whole front of the garment.

Let’s begin with the US uniforms created by Nike. The majority of the home kit is white, with the US Soccer emblem centered on the front. Along the sides and at the neck are red and blue accent stripes. The away jersey is marginally better with a blue tie-dye motif with the team emblem in the centre, but generally the United States’ World Cup outfits are among the worst.

Majid, an Iranian sportswear manufacturer, produced Iran’s World Cup uniforms for 2022. The sole difference between the home and away jerseys is that the home shirt is white and the away shirt is red. On the left breast is the Iranian football team’s insignia, while the shoulders feature an odd cheetah print design. The kits are somewhat uninteresting, with the only major distinction between home and away being the color.

Switzerland may have received the worst uniform of the year from Puma, who entered the World Cup kit market for the 2022 tournament. In addition to the pinstripes on the shoulders, there is nothing else noteworthy about the red home uniform. On the other hand, the away kits are receiving criticism for featuring what appears to be an iPhone calendar emoji or a “Hello, my name is” name tag in the center of the white jersey.

Evidently, Puma favors a large logo on the front of a shirt. Similar to the Switzerland away jersey, the Serbia away shirt features a huge emblem in the middle and little more. This logo, which is centered, has more detailing than Switzerland’s. A form resembling an octagon with the player’s number in the center and the Serbian crest at the top. Other than that, the away jersey is really unremarkable. As is the home shirt, which is brilliant red with gold accents and fading star-like patterns covering the whole front.

SERBIA: B@FSSrbije rebranded before to the World Cup, resulting in a basic home kit. It is incredibly regal, with red dominating and gold embellishments. The gold remains on the away, but the Puma template makes it not very remarkable. pic.twitter.com/It8RFGIGqk

The Uruguay home uniform resembles a blouse that you may wear to Thanksgiving dinner. There is a button at the collar, and the sleeve ends are white. The uniforms are manufactured by Puma, so what do you think is in the middle of their away shirt? If you guessed a large logo in the center, you are correct! This one is actually a bit prettier than that of Switzerland and Serbia. It contains a centered logo resembling a crest, player numbers, and Uruguay’s crest atop the logo. This Puma away jersey boasts Uruguayan sky blue stripes along the center of the front, as well as stripes on the sleeve ends and around the collar.

Uruguay will wear sky blue against South Korea and Ghana.

However, against Portugal, La Celeste will wear the dreadful, abominable away outfit. pic.twitter.com/0ZMYYLAWd9