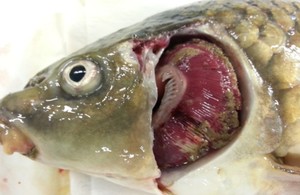 In the UK, KHV, a deadly viral disease of fish, is a recognized illness. It can cause widespread fatalities in all types of common and ornamental carp species (Cyprinus carpio).

The following symptoms of KHV disease in fish may appear, especially in waters that are between 16 and 28 °C:

If you believe there is a KHV outbreak, you must alert the FHI. For example, fish exhibiting the aforementioned symptoms or carp or carp hybrid fatalities.

There is no danger to the general health.

Following an outbreak, sites with KHV illness must go through a thorough monitoring regimen.

The FHI visit these locations to search for signs of disease and to check that the statutory controls are being followed.

When a notifiable disease is confirmed, FHI implements measures to stop its spread (these are known as confirmed designations).

Under disease controls, the following requirements are implemented:

Moving any aquatic animal, including eggs and gametes, into, out of, or within a confirmed designation area is prohibited without the prior written authorization of the FHI.

Dead aquatic animals, including eggs and gametes, must be disposed of according to local Environmental Health Department regulations using an approved technique for the disposal of Category 2 animal-by-product trash.

In the event that fatalities recur or spread to other waters within the specified area, please notify the Fish Health Inspectorate right away.

Any planned physical modifications to sites within the designated area, such as site boundaries, the quantity or amount of waters, or the use of the site, should be communicated to the FHI in advance.

Prior written approval from FHI will be required for all such changes.

The FHI implements statutory procedures to stop the spread of the disease when laboratory testing at a site reveals KHV sickness. Aquatic animals are unable to move freely due to these constraints.