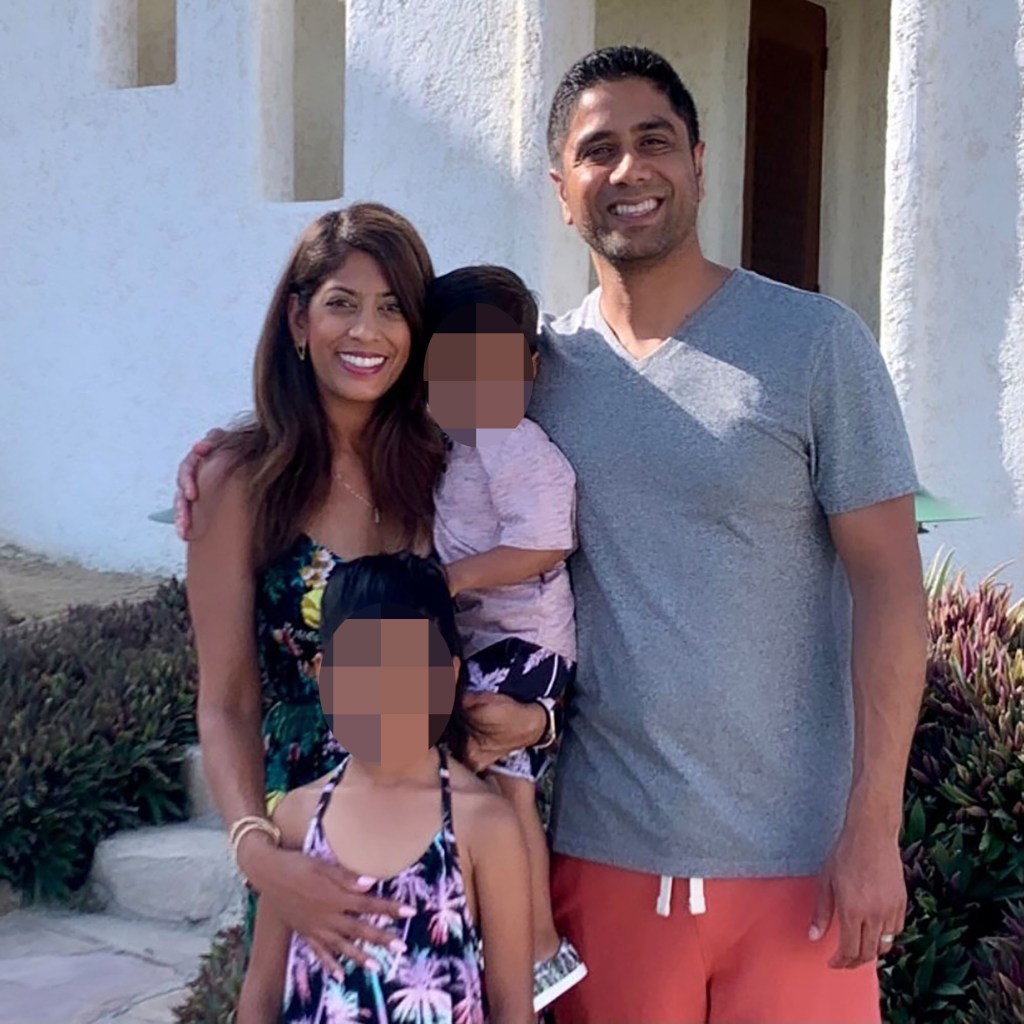 The doctor who allegedly intentionally drove his Tesla off a California cliff was shown on camera presenting a Christmas gift to a neighbor days before he drove his car off the freeway.

Dr. Dharmesh Patel, age 41, remained hospitalized on Wednesday as neighbors of the “idyllic” family struggled to comprehend what precipitated the terrifying episode.

Longtime Lomay Place resident Roger Newmark told the Los Angeles Times, “They are a wonderful, ideal family with no evidence of problems.”

“It’s really bizarre since he’s a wonderful person. “Perhaps it was a moment of madness,” he added, adding that Patel, his wife Neha, 41, and their children, a 7-year-old girl and a 4-year-old boy, had moved into the neighborhood approximately five years ago.

The publication reported that the doctor, a radiologist at Providence Holy Cross Medical Center in Los Angeles, was also a doting father who was frequently seen playing with his children in the small hamlet.

Dr. Dharmesh Patel, his wife Neha, and his two children, a girl aged seven and a boy aged four, miraculously escaped after their Tesla careened off the infamous “Devil’s Slide.”

Ring footage published by the LA Times showed Patel delivering a poinsettia plant to his neighbor on Christmas Eve, before he left for Northern California.

“My name is Dharmesh,” he informs a relative who is caring for the house while the owners are abroad, adding that he resided next door, where the white Tesla can be seen.

“May I simply leave it by the entrance door?” Patel says.

According to Newmark, the Patels also sent out Christmas cards displaying photographs of the joyful family, whose home still has a decorated tree inside, as reported by the LA Times.

The California Highway Patrol stated that Patel, photographed with his wife and two children, will be booked on attempted murder and child abuse charges after he is released from the hospital.

Once released from Stanford Hospital, Patel, 41, will be booked on charges of attempted murder and child abuse, according to officials.

Monday around 10:50 a.m., he is accused of purposely and mysteriously driving his electric vehicle 250 feet off the renowned “Devil’s Slide” part of the Pacific Coast Highway.

On New Year’s Eve, the doctor is caught on Ring video bringing poinsettias to a neighbor.

Another neighbor characterized Patel as “just so present.”

Sarah Walker told the newspaper, “Dharmesh and I would wave hello to one another, but he would constantly approach me to strike up a discussion. He was constantly cheerful and ready to converse.

She said, “I truly cannot believe it. Nobody believes it. They had the feeling of newlyweds. It was obvious that they should be together based on their interactions and glances.”

His wife displayed no outward indications of disagreement on social media, where she posted endearing photos of the children as they got older.

A spokesperson for the Pasadena city manager informed the LA Times that law enforcement had never responded to a domestic disturbance at the Patel residence.

Police reacted to burglar alarms and reports of suspicious persons at the address nine times since 2017, according to the news outlet.

The LA Times reported that all of the occurrences were labeled as false alarms, baseless, or canceled, citing police records.

The California Highway Patrol tweeted @bayareafirefighter/Mega Patel has been arrested on accusation of attempted murder and child abuse.

Investigators have not yet confirmed what driving mode the Tesla was in, including whether its Autopilot function was engaged.

The accused crime’s motive has not been disclosed, but the California Highway Patrol “established probable reason to think this occurrence was an intentional conduct” and detained Patel, according to officials.

Providence Holy Cross Medical Center stated in a statement that it was “very distressed to learn about a traffic incident involving one of our physicians and his family.

“We are incredibly grateful there were no catastrophic casualties. We will not reply more, since this matter is under investigation,” it stated.