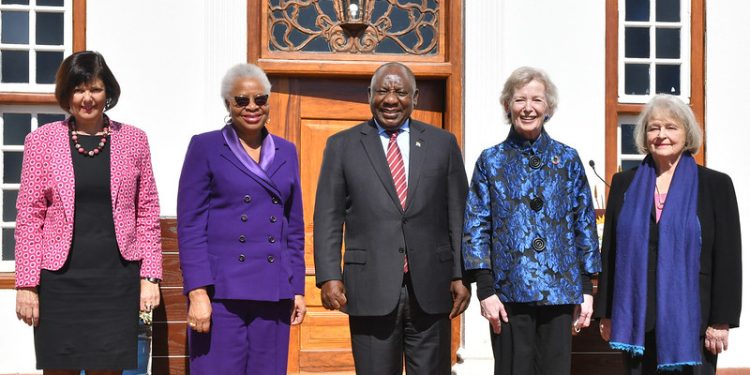 Ireland’s first woman president and chair of ‘The Elders’ Mary Robinson, says one of the biggest challenges the world faces is underwhelming leadership amid massive challenges like climate change and nuclear weapons.

She was speaking following a meeting with President Cyril Ramaphosa, and former First lady Graça Machel, in Pretoria. ‘The Elders’ is an international non-governmental organisation founded in 2007 by former President Nelson Mandela.

It is made up of public figures such as peace activists, senior statesmen, as well as human rights advocates who offer collective experience to promote peace.

Robinson expressed concern over the nuclear issue, “The world is in a very perilous state, it’s in a perilous state for a number of issues that ‘The Elders’ deal with, including the nuclear issue. We were at doomsday clock, my other deputy Ban Ki-moon and myself in 2019 said. The clock moved a hundredth second to midnight, the highest point. I think, next January, I wouldn’t be surprised if it moved further. That’s how perilous we are.”

Robinson says the world is worse off today than 15 years ago when they formed the group. The group was formed to help the world tackle global challenges including climate change, conflict and disease.

President Ramaphosa welcomed his meeting with ‘The Elders’ saying it was fruitful and helpful for the country.  Ramaphosa briefed the group on the country’s progress in meeting the Sustainable Developmental Goals especially on the uiniversal access to healthcare .