Skip to content
Home » News » News » The Duchess of Sussex is seething over the Supreme Court’s decision and told feminist activist Gloria Steinem, 88: ‘Well, Gloria, it seems as though you and I will be taking a trip to DC together soon’ 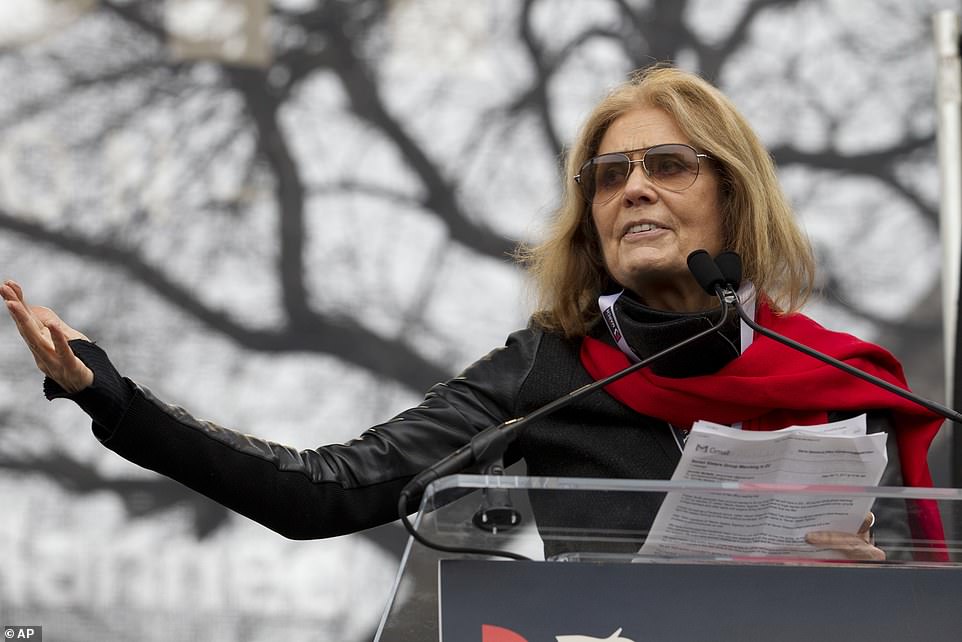 Another significant move into US politics, supported by her ‘feminist’ husband Prince Harry, was made by Meghan Markle when she said she was prepared to march in Washington, DC, against the Roe v. Wade abortion verdict and encouraged people to vote in the November midterm elections.

The feminist icon Gloria Steinem, 88, was told by the Duchess of Sussex, who is furious with the Supreme Court’s ruling, “Well, Gloria, it seems as though you and I will be taking a journey to DC together soon.”

Meghan also advised males to express their outrage over Roe v. Wade’s repeal in an interview with Vogue, and she said that Prince Harry’s reaction to the Supreme Court’s ruling last Friday was “guttural.”

My spouse and I have spoken about that a lot over the past several days, she remarked.

He’s a feminist, too,” she added in a statement that will likely be interpreted as being pro-Democratic.

“We have to channel that anxiety into action,” she continued. We may begin with the midterm elections in November. Every time, we must vote.

The political involvement of Meghan and Harry is well-known, and they just hired Miranda Barbot, a former advisor to former President Barack Obama who was instrumental in his 2012 reelection campaign.

After consistently pressing Americans to participate in the presidential election, they were charged in 2020 with “violating” the provisions of the “Megxit” agreement.

Since Mr. Trump’s supporters believed the couple was trying to mobilize postal voters, one of the crucial groups that swept Mr. Trump out of office and won the election for Joe Biden, their statements were widely perceived as anti-Donald Trump, including by the president himself.

Mr. Trump even vowed to run for president in 2024 if Meghan decided to run.

While she hasn’t publicly discussed gun control, Meghan also booked a private aircraft last month to fly 1,400 miles to Texas where she left a bouquet of white “peace” flowers at a monument for the 19 children and two teachers killed at Robb Elementary School.

She has also pressed senators to strengthen parental leave entitlements.

Since she and Harry relocated from Britain, there has been much speculation about Meghan’s political aspirations, including assertions that she would “seriously consider” running for president if her husband gave up his regal title.

And in 2020, a close friend of the Duchess revealed to Vanity Fair that one of the reasons she kept her American citizenship after marrying into the Royal Family was to offer herself the possibility of going into politics in Washington.

The President Joe Biden’s sister, Valerie, 76, recently invited the duchess to join the Democratic Party and stated that she would “of course” be a wonderful presidential contender, proving that the rumors have certainly gained traction in Washington, DC.

Meghan would become the first female US president, narrowly defeating Hillary Clinton’s bid four years ago, and the second non-white person to hold the office after Barack Obama.

A Hollywood actor for forty years before to entering politics, President Ronald Reagan, would likewise be following in her footsteps.

The Duchess spoke at the When All Women Vote Couch Party, a group co-founded by Michelle Obama to promote voting, during the 2020 election season.

Meghan’s acquaintances have in the past fueled rumors about her political aspirations, referring to her as “the epitome of the American dream” for rising from humble beginnings.

The day following Friday’s decision, Ms. Steinem said in an interview with Meghan yesterday that she would welcome women who were flying to New York for an abortion into her own Manhattan home.

The miscarriage, according to Ms. Markle, cemented her stance on the value of the right to an abortion.

I consider how fortunate I felt to be able to have both of my children, she added. I am familiar with how it feels to be connected to what is developing inside your body.

“I have spoken publicly about the experience of miscarrying, so I know how it feels.”

More individuals will see the importance of having safeguards in place as we normalize conversation about issues that touch our lives and bodies.

She claimed that her husband was a feminist and that the Supreme Court’s ruling infuriated him.

All males, according to Markle, must join women in the struggle to defend the right to an abortion.

Men need to speak up now and in the future because these are choices that have an impact on interpersonal relationships, families, and entire communities, she said.

“They may target women, but we are all affected by the results.”

The previous few days, my spouse and I have had numerous conversations about that. He is also a feminist.

When Markle discovered Steinem was taking refuge during the pandemic close to their California home in 2020, she approached Steinem, who was able to affirm Harry’s keen interest in women’s rights.

She referred to them as her “chosen family.”

He had a guttural response the previous week, just like I did, Markle said.

“I am aware of the sense of dread that so many women are experiencing right now.

But once more, we must unite and stop moping. We have to put forth the effort.

The mother of two emphasized the need to “normalize dialogue about the things that touch our lives and bodies,” making reference to her own choice to speak publicly about her own miscarriage in November 2020.

This is about the physical protection of women, she declared.

It also has to do with economic justice, personal freedom, and the character of our society.

No one should be made to make a choice that they do not want to make, is risky, or endangers their own life.

Steinem shared her experience having an abortion in London, which she claimed gave her the freedom to live the life she desired.

And because we had the freedom to make our own decisions, we are both doing well.

Steinem, who was born in Ohio and migrated to New York in 1960, is famed for founding Ms. Magazine, the first publication run entirely by women, in 1971.

When asked what she would do to assist, she responded, “Everything from the simple effort to say, “I have a guest room if you need to come to New York State, you can stay here,” having been at the vanguard of women’s rights for more than 50 years.

It, naturally, has a limit given that there is only one room.

But at least it’s something I can give, says the speaker.

Steinem opined to Vogue that it was crucial for Meghan and Harry to speak out on the subject.

Because trust is something they both possess. Nothing but nothing can replace our trust in them. It is the most significant trait or characteristic.

When we watch anything on television, we might not trust it or believe it.

But we believe what folks like these two tell us, so there.

In her campaign to persuade Congress to ratify the Equal Rights Amendment, which would ensure equal legal rights for all Americans, regardless of sex, Steinem has enlisted Markle’s support.

If this is the kind of legislation that needs to be pushed through, then this is a moment that I am definitely going to show up for, Markle added.

“Being at home, watching what’s happening in our nation, and feeling invigorated and driven.”

Markle, who was born in Los Angeles, stated that this moment “needs unity.”

She claimed to be upbeat.

I always approach situations with a sense of optimism.

You have a choice: You can sit there and be complacent and watch it, or you can say, “What can I do to get us to the other side of this?” she said. If you genuinely feel that there can be something better, if you perceive injustice.

Another justification for calling Gloria was that I was aware of what I was searching for. Starting with hope is what we need right now.

‘Really listening to people, realizing the Constitution was drafted at a period when women were second-class citizens,’ she said, was necessary.

I believe it’s equally important to respect those who have been carrying out the work long before us, like Gloria, she continued.

We shall continue to carry out this work together, and I’m thankful that I’m holding a baton right next to her.