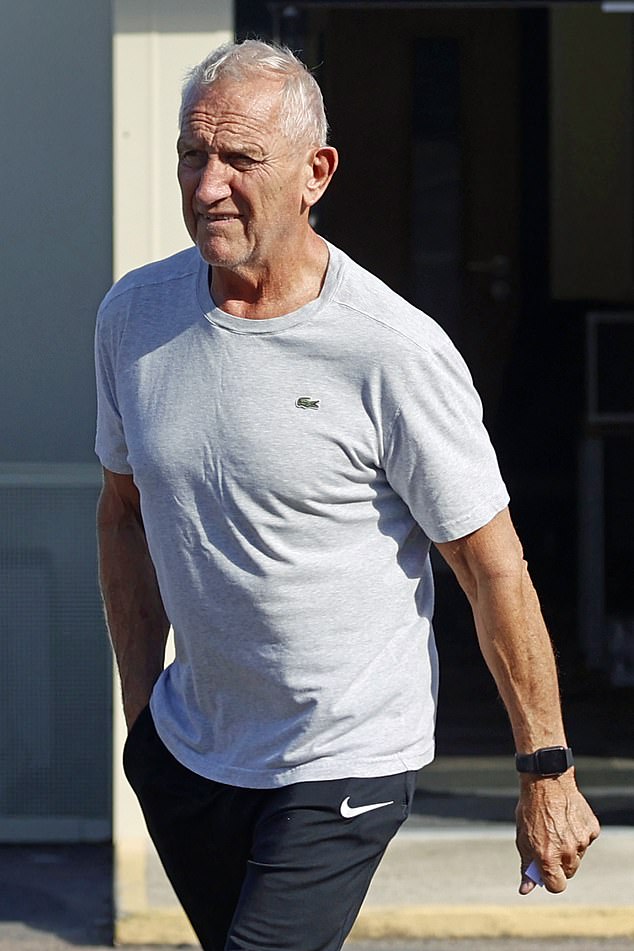 Just days after MailOnline revealed that Kenny Noye had been ticketed for speeding, he was seen driving a flashy new automobile worth about £50,000.

Even though he is a retiree without a job, Noye, 75, who served 21 years in prison for killing Stephen Cameron on the M25, seemed to be able to buy the car with a top speed of 134 mph.

In 1983, a £26 million Brink’s-Mat raid at Heathrow resulted in the theft of gold bullion by a former mobster who had also previously fatally killed an undercover police officer. He was found guilty of handling that gold in 1986.

11 bullion bars were discovered at his former residence, but the majority of the stolen gold was never found.

Mercedes lists its base GLC 220d vehicles on its website for £49,465, but buyers must fork up extra money for higher-spec variants.

It’s believed that Noye’s previous black VW Tiguan sports utility vehicle was replaced by the automatic diesel variant, which has a top speed of 134 mph.

Noye’s financial situation is still a mystery, and it’s unclear how he supports his way of life.

He is eligible for a state pension in the UK worth up to £185.15 per week as a pensioner, but he would only receive the full amount if he had paid into the system for 30 years.

Due to the fact that Noye spent almost 30 years in prison, it is unknown how much NI would have earned during his career.

He qualified for a £46 “discharge grant” when he was released from prison in June 2019.

This one-time payment from the government is intended to assist freed inmates with their initial subsistence expenses, including travel and food. Since then, it has risen to £76.

Noye was caught speeding in his VW Tiguan on the A225 in Otford, Kent, on February 25 at 47 mph in a 40 mph zone, according to information published by MailOnline last week.

He was offered the option of attending a speed awareness course or have three points added to his driving record.

Noye is thought to have chosen the course because it included a lesson on the risks associated with road rage.

In 1985, Noye discovered DC John Fordham hidden in the grounds of his 20-acre estate in West Kingsdown, Kent, and stabbed him ten times.

When Noye was suspected of handling gold bullion from the Brink’s-Mat raid, the officer was keeping an eye on him.

Charged with DC Fordham’s murder were Noye and Brian Reader, who later rose to renown as the brains behind the Hatton Garden jewelry robbery in 2015.

However, an Old Bailey jury found the two not guilty when Noye asserted that he had acted in self-defense because he had feared being attacked.

After being freed from jail, Noye was on parole when he lost his composure and stabbed Stephen Cameron, 21, in a roadside altercation on a slip lane of the M25 in Swanley, Kent. Noye was eventually found guilty of handling some of the stolen gold.

He escaped the country in a private plane given by his late friend John Palmer from the Brink’s-Mat team, and he ultimately made his way to southern Spain, where he was apprehended in August 1998.

Noye was apprehended after Stephen’s girlfriend Danielle Cable, who saw the murder, was brought covertly to the scene by British police and recognized him there. She is still in a witness protection program.

In May 1999, he was returned to Britain by extradition, and the following year, Danielle bravely testified against him in the Old Bailey.

Noye was sentenced to life in prison for murder and given a minimum 16-year sentence, however he was released from prison in June 2019.

One of his parole requirements includes a warning not to break the law or associate with those who had a criminal past.

According to sources, he met the divorced mother-of-three close to her Kent home at a roadside hamburger stand.

Later, Noye was observed going to her house, seeing the countryside with her, and enjoying intimate outings to neighborhood pubs.

According to MailOnline, he even showed up at her stables, which are close to Dartford and where she introduces her horses to school groups of young children, sometimes assisting them with anxiety or other emotional issues.

Many of Mrs. Budd’s horse-loving friends were surprised by the unlikely pair’s growing bond because they were worried about Noye’s criminal past.

When he first saw her 18-year-old son, he allegedly introduced himself just as “Ken.”

Noye has two adult boys, Kevin and Brett, with his wife Brenda Tremain, with whom he is separated.

In October 2020, it was announced that he was reuniting with Karen Bricker-Jones, a businesswoman he had first dated 40 years earlier before going to prison.

Following his release from prison, he was rumored to be splitting his time between Karen, a mother of threetasteful ,’s four-bedroom mock Tudor home in Surrey and his bachelor pad in Kent.

While staying at her house, neighbors observed him putting the trash out and carrying her grocery shopping.

The 59-year-old, privately educated Karen, was reported to have paid Noye frequent visits while he was serving his murder term.

Mrs. Budd, a grandmother of two, identifies as a certified physical education teacher and equine learning coach in internet posts.

The Kent Equine Facilitated Learning Centre, a nonprofit organization that encourages “relaxation via horse care,” is owned and founded by her.

Children are believed to benefit from Mrs. Budd’s therapy sessions by “connecting with nature, managing emotions, and natural crafts.”

There are numerous images of young people patting and petting horses on the website for her stables.

According to her biography, she provides “help for persons looking for solutions support with relationships, work, progress, acceptance, forgiveness, trauma addicts and autistic children.”

‘She is all about peace and love and calls herself a “Hippy Chick,”‘ a friend of Mrs. Budd told MailOnline in October.

She does have a kind and sympathetic attitude. It all comes down to being kind and exploring your inner self. However, Noye is vicious, evil, and has killed two people.

It is difficult for us to envision them together as friends. When it comes to each person’s personality, they are like chalk and cheese. She is a compassionate individual who shows concern for the kids she assists.

She responded, “I don’t know what you are talking about mate,” when first approached.

She later admitted, “I do know him. He’s a friend of the family. I have no comment to offer, mate, she added. I didn’t know that. I must admit that I am a little taken aback.

She said, “I have no comment to make,” when asked how a woman who identified herself as a hippy felt about the fact that he had killed two people.