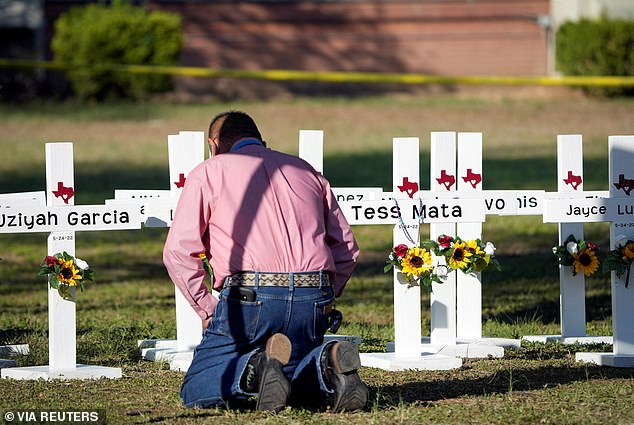 As details of Tuesday’s horrible school shooting in Texas become clearer, concerns about why it took so long for police and school resource officers to apprehend the perpetrator are surfacing.

On his way into Robb Elementary School at 11.30 a.m., Salvador Ramos, 18, managed to get past a school resource officer and two officers.

It wasn’t until 1.06 p.m. that Uvalde police confirmed that he had been shot and killed.

What is unclear is why it took police so long to kill him, what exactly happened in the classroom in the hour between then,  and what police plan to do now to make sure it never happens again.

The Texas Department of Safety has now opened an investigation into police response to the shooting.

A school resource officer whose job it is to stop shooters was unable to stop Ramos from strolling into the school with an AR-15.

The gunman instead bypassed him ‘unimpeded’, according to sources, to make his way inside.

That resource officer has not yet been identified. There are at least two at Uvalde Elementary School.

2) Who were the two cops who encountered him first and why weren’t they able to stop him either?

Within seconds of arriving at the school and before he got into the classroom, two other law enforcement officers were there.

They followed the shooter to the classroom, according to law enforcement sources cited by The New York Times, but he shot at them and then barricaded himself.

They then retreated, and a tactical SWAT team who were nearby raiding stash houses arrived at the scene and took over.

3) How was the shooter able to barricade himself inside classroom with kids?

Once he got to the classroom, Ramos barricaded himself inside.

It took at least another hour before police announced that they had killed him.

In that time, one law enforcement source says SWAT teams were struggling to breach the door that he’d locked.

By then, he had murdered 19 children and two teachers.

It remains unclear what kind of doors were in the classroom and if they were self-locking and designed to keep shooters out in an active situation.

4) What took so long to get into the classroom here he was barricaded?

SWAT teams arrived at the school at around the same time he was inside shooting kids. They rushed to the classroom but they couldn’t get inside.

Instead, they had to wait for a staff member to produce a key that would open the door and finally give them access.

5) Did cops call out telling kids to yell for help if they needed it?

One survivor told how he and the other kids were hiding in the classroom when the shooter emerged.

He says that cops then told them to ‘yell’ if they need help. One girl did but was then found by the shooter, he said.

It’s unclear if cops did instruct the kids to yell out for help, and where exactly they were at the time.

6) What were the 150 police officers at the scene doing other than holding back parents?

Over the course of the hour, while SWAT teams struggled to get into the classroom where the shooter barricaded himself, frantic parents were gathering outside trying to get to their kids.

It had already been announced that there was an active shooter at the scene.

Parents tried desperately to get into the school when they arrived to see police officers standing outside with guns.

They demanded to know why those officers weren’t also trying to get inside to find the shooter – as they wanted to.

Video shows some of those cops holding down parents in the school yard instead and yelling ‘we’re taking care of it.’