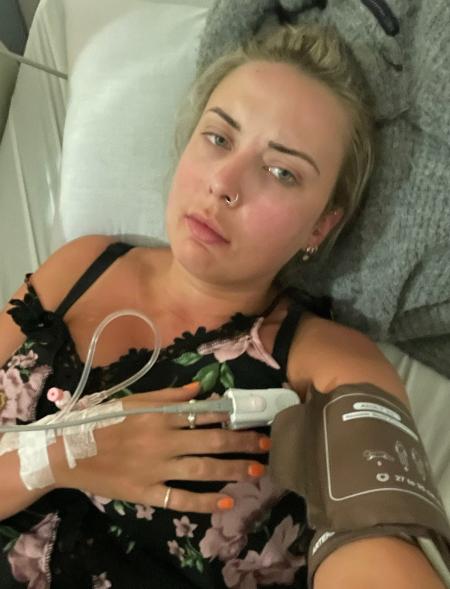 This British couple’s honeymoon turned into a nightmare when the bride was stung by one of the world’s most poisonous fish, leaving her in excruciating pain for months.

“What was supposed to be an incredible honeymoon was ruined from that moment on,” Amy Thomson, 27, told SWNS. The traumatic occurrence occurred in September, when she and her 37-year-old new husband Callum Thomson had travelled on a two-week honeymoon to the lovely Indian Ocean island of Mauritius.

While the newlyweds were snorkeling, Amy decided to take a plunge to cool down.

The Hampshire-based hairdresser explained, “Through our travel agent, we chose a speedboat excursion that takes you to all the various snorkeling locations.” We were towards the conclusion, and there was a beach barbecue.

She said, “We were all on the beach, and I was between courses and rather hot, so I decided to go swimming.”

Amy spend the night in the hospital, where she got anti-venom for the sting, fluids, painkillers, and, later that night, an incision in her foot through which the venom was extracted.
Melissa Thomson / SWNS

Amy Thomson described her stonefish stung as follows: “When I glanced at my foot, it had already quadrupled in size and was swelled, and when I looked at the bottom of my foot, it had turned blue and white,”

The stonefish is one of the most lethal fish in the world, having caused countless deaths in the Indo-Pacific area.

However, as Thomson was about to put on her sea shoes, “the guy who was arranging the excursion said, ‘No, no, you don’t need those here,'” she said. Following his recommendation, she entered the ocean barefoot.

According to the Australian Museum, stone fish are the most poisonous species in the Indo-Pacific area and are responsible for many deaths.

With their strong dorsal spines, the creatures shoot a highly deadly venom that produces “severe discomfort.”

Amy spent the remainder of her honeymoon with a bandaged foot relaxing by the pool.
Melissa Thomson / SWNS

“I was about to put on my sea shoes when the tour organizer told me, ‘No, no, you don’t need those here.'” “There was nothing but sand, so I listened to him and entered,” Amy explained.
Melissa Thomson / SWNS

Stonefish may blend in so well with their environment that their food, predators, and even human SCUBA divers have difficulty seeing them, according to Oceana.org.

After swimming back to shore, Amy reported experiencing the most excruciating pain she had ever felt.

The honeymooner, who first believed she had trodden on coral, said, “I immediately returned to the coast, and when I got there, I’ve never felt such much pain in my whole life.” “My foot had already quadrupled in size, was swelled, and when I looked at the bottom of my foot, it had become blue and white.”

Amy has not yet fully recovered from her sting.
Melissa Thomson / SWNS

According to SWNS, it took an hour for the boat to return Amy and Callum to land and an additional 45 minutes for them to hail a cab to the hotel.

She saw the hotel doctor upon her return, who recommended her to the hospital for treatment.

The distressed bride stated, “They blue-lighted me almost an hour away from the hospital, and the anguish lingered until I was ultimately placed on a drip and given morphine.” “I spent the night in the hospital, where I received antivenin for the sting.

She said, “I was given fluids, painkillers, and later that night, an incision was made in my foot through which the venom was extracted.”

Amy has been taking antibiotics since her return from travel.
Melissa Thomson / SWNS

Her treatments ultimately cost her over $2,000 total. Amy and Callum remained in Mauritius until September 30, despite Amy’s severe condition, but the bride was unable to participate in any activities owing to her health.

“For the remainder of my honeymoon, I was bandaged and unable to do anything but lounge by the pool,” bemoaned the barber.

Unfortunately, her problems persisted following the conclusion of her hellish honeymoon. “My foot ballooned up like a balloon on the way home, and I am still in pain,” Amy added, adding that she has been taking antibiotics since coming home. The barber stated that she also has an impending appointment since her stonefish-inflicted “toe won’t stop bleeding.”

The new bride bemoaned, “There is still no treatment for it, and I’m quite depressed since I’m still hurting.” “All because as I was putting my shoes on, all that guy had to do was be silent and allow me to finish putting them on.”