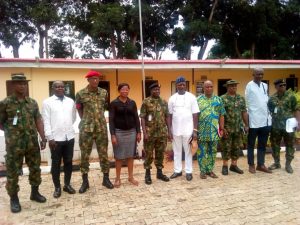 In a brief address during the official launch of the forty two paged  book at the Conference Hall, Army Barracks, Onitsha, the Commander, Three Hundred and Two Artillery Regiment, Onitsha Col. Abdulkalin Usman who represented the Army Chief, described the book as  a welcome development and commended  the efforts of the author in presenting the Army in good light.

Light General Yahaya said his   endorsement of the book is a form of encouragement to the army community to be more committed to their duty and motivation to the youths.

In an address, the author, Mr. Patrick Akobo said his decision to write the book was informed by his background as a Barracks Boy who saw his father discharged his Army work diligently.

Mr Akobo said he was also opportuned to work as a media coordinator to many serving and retired Army Officers which made him to see how well  structured and organized the Army is, but noted that his interaction with the society showed how ignorant people are about the true situation in the Barracks, which the book sought to correct and thanked the Chief Of Army Staff for the huge donation and others for their support.

Top military officers and Committee on the book launch were present during the cash presentation.

Meanwhile, the book ” A true Barracks Boy ” was previously launched at the Officer’s Mess where Anambra State Governor, Chief Willie Obiano represented by the Chairman Conflict Resolution, Air Vice Marshal Ben Chiobi stressed that security model in Anambra state was as a result of the pro-activeness of security agencies in the state.


Gov. Obiano while commending the efforts of the author expressed hope to see more children from the Barracks excel in global competition urging youths to always think on how to make a difference in their generation.

Col. Paul Adeke in charge of Fourteen Field Engineering, who stood in for the book reviewer, Maj. Gen. Emmanuel Odeh, retired, said the writer has given the Barracks people, both military and civilian, a much needed laundry from the wrong perception held by some that nothing good can come out of the Barracks.