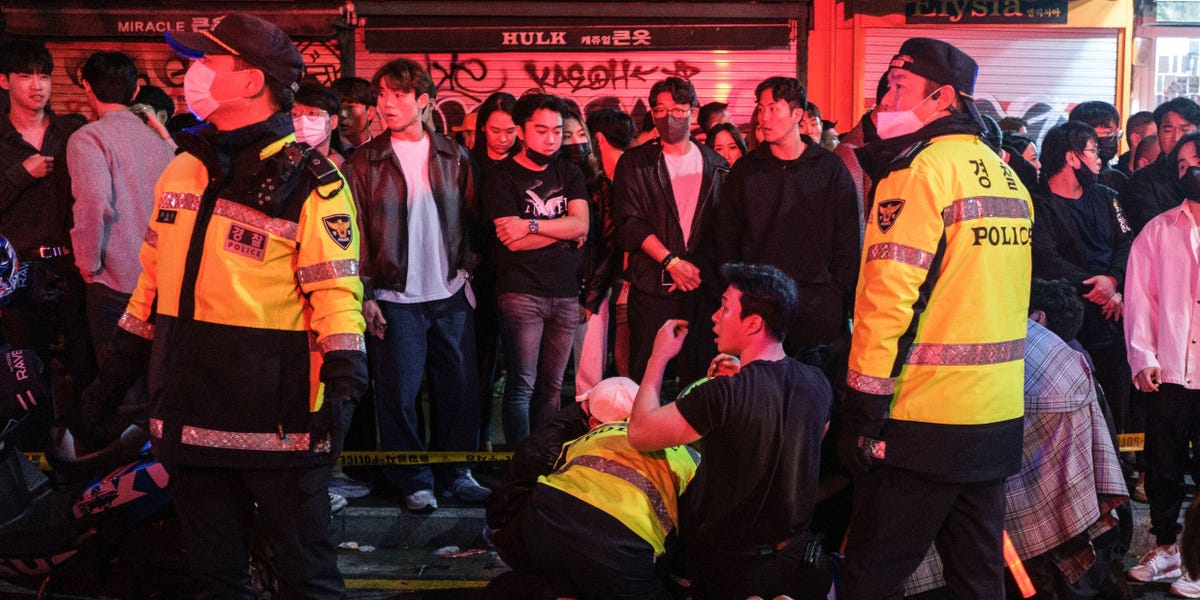 The Indian expat residing in Seoul, Saurav Bajoria, arrived at Itaewon around 10 p.m. on October 29. Halloween festivities filled the streets to capacity, but Itaewon was always crowded on weekends, so Bajoria didn’t think much of the crowds.

In a devil costume and horned hat, he began his evening by eating ice cream, conversing with friends, and moving between pubs and restaurants along Itaewon’s narrow alleys.

At one point, he texted his wife, “You should join us,” he told Insider.

Bajoria and his companions saw a body being carried down a nearby street approximately an hour into their evening. They believed it was a Halloween stunt.

“Then, a third passed by, followed by a fourth. Then 10 arrived, “he said. “At that point, I realized something was amiss.”

In Seoul, South Korea, emergency services transport a victim of a stampede that occurred during a Halloween celebration.

In the days that followed, the world watched in horror as reports surfaced of how a night of celebration in the narrow streets of Itaewon turned into a deadly human crush that left at least 156 people dead and at least 151 injured.

Zara Lily and her fiance Yun Jinhyeong, dressed as zombies, arrived early for coffee in Itaewon. Even at 4:00 p.m., the streets were packed with revelers dressed to the nines for Halloween.

“Occasionally, people would stop to take photographs,” Lily told Insider. This slowed down pedestrian traffic, resulting in the crowd pressuring those individuals to go quicker.

As evening descended, the gathering gathered.

Lily and Yun exited the club Runway around 10:25 p.m. and entered the street. That’s when they understood the crowding had grown unsafe.

Lily stated that there were numerous instances in which a wave of pushing caused people to fall forward and then backward, similar to ocean waves.

Lily stated that the shoving ceased when sirens and flashing lights filled the air.

Lily stated, “People were saying ‘Make way, get out of the way’ so that they could transport the injured to the ambulances.” It was an absolute horror, like something from a catastrophe film.

The accident site is cordoned off by police in the Itaewon area of Seoul, South Korea.

Hundreds of people began to tumble like dominoes two streets away from her on a slope near the Hamilton Hotel minutes ago.

Since the lane was connected to a street of pubs and clubs, people entered from three directions, according to G. Keith Still, a visiting professor of crowd science at the University of Suffolk in England.

“The problem is that those at the bottom cannot escape due to the weight of those above them,” said Still. According to past research, if a person loses the ability to breathe, they have four to six minutes before their primary organs shut down.

Bajoria, concealed in a noisy side alley, was oblivious of a mob collapse occurring less than 100 feet away.

A police officer ordering revelers to turn around prevented him from reaching the Hamilton Hotel. Bajoria stated that some individuals did not take the officer seriously, believing he was wearing a costume.

Bajoria stated that some individuals did not take the officer seriously, believing he was wearing a costume.

Still stated that it is practically hard to acquire a complete image of what is happening in a dense crowd when you are in the middle of it.

“It happens frequently in large groups. You will be unaware of what is occurring three to four meters ahead. People will be oblivious to the anguish just a few meters ahead of them “Still added.

He stated, “You won’t realize it until it’s too late.”

Failure to establish a safe atmosphere

At approximately 11:30 p.m., as Bajoria wandered out onto the main road, he realized the enormity of the tragedy.

Dozens of dead were strewn across the road while partygoers and medical personnel administered CPR urgently. Along the road, bodies were covered with white and yellow sheets.

“At that point, I lost my nerve,” he explained. That evening, he published a video of the mass resuscitation effort.

According to transcripts of emergency calls published by the police on Tuesday evening, calls to the Seoul police force began trickling in as early as 6:34 p.m., as reported by the Korean daily Chosun Ilbo.

According to a Bloomberg translation of the first conversation, a caller stated, “There are a lot of people walking up and down the alley, and I’m quite nervous.” “People may be crushed because they cannot descend, yet they continue to ascend. I just dodged danger. There are too many individuals. I believe you should assume command.”

According to Agence France-Presse, emergency agencies had received at least 81 calls reporting the crush by 10:43 p.m. The amount of casualties on the scene overwhelmed the first responders. By midnight, the authorities had raised the “first-stage emergency reaction order” to the third level.

Lily stated that she did not observe any safety measures.

“There was no security protecting us. There were no officials wearing high-visibility jackets to ensure our safety “Lily remarked. We were all by ourselves and were attempting to survive and save our own lives.

A top public safety official and the chief of a police division revealed after the catastrophe that there was no safety plan in place for events without an organizer, such as Halloween celebrations.

Later, police stated that 137 policemen were present that evening, but that they were not assigned to crowd control but rather to combat crime and “illegal activities.”

Crowd-science specialist Still stated that only a few well-trained and strategically-positioned police personnel are required to properly manage a large crowd.

It was a failure to create a safe atmosphere, he explained.

President Yoon Suk-yeol has since declared a national period of mourning in South Korea, which was stunned by the deaths. A memorial altar has been erected at Seoul Plaza in front of City Hall, where hundreds of flowers have been left for the deceased.

Lily and her fiance waited on a sidewalk for two hours until the crowd dispersed on the evening of October 29 amidst the turmoil. They were unable to obtain a taxi, so they strolled to a convenience shop and a late-night eatery before strolling to the subway station to await the 5:30 a.m. homebound train.

After seeing the deaths on the main road, Bajoria immediately drove home.

“That night I was unable to sleep,” he stated. “Simply so many deaths. These scenes continue to play in my thoughts every hour or so.”