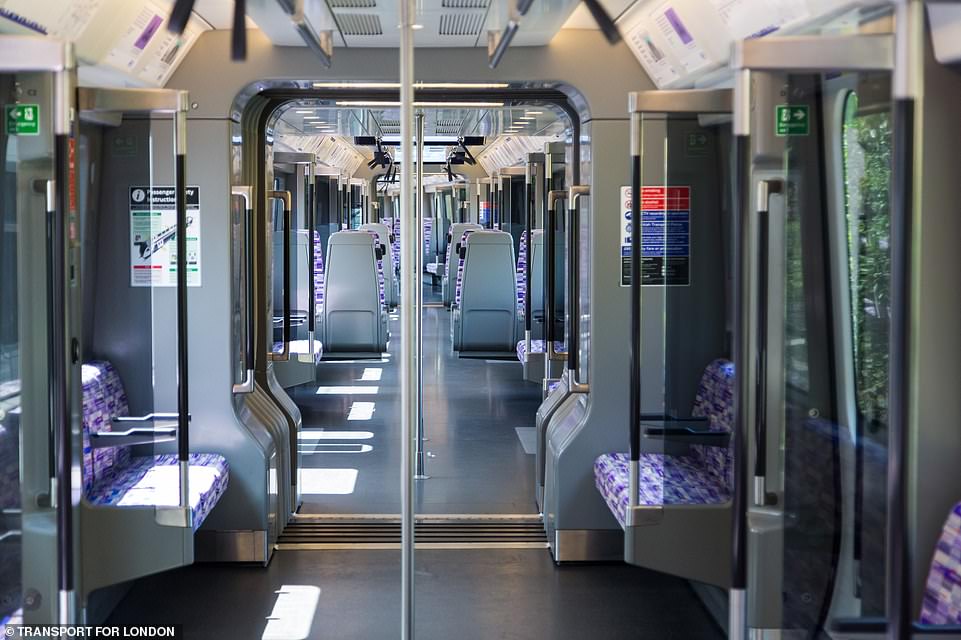 London Mayor Sadiq Khan was today sensationally accused by the Government of breaching pre-election rules by revealing the long-awaited opening date for the first section of Crossrail on the eve of tomorrow’s local elections.

Transport Secretary Grant Shapps said Mr Khan had shown ‘breathtaking political cynicism’, and he had referred Transport for London’s announcement – made at 9.45am today – to the Electoral Commission for investigation.

But Mr Khan then hit back and accused Mr Shapps of trying to ‘start a row rather than join the celebrations’ and claimed that the Department for Transport were told about the opening date announcement ‘well in advance’.

The opening date for Crossrail’s first phase was finally revealed this morning as May 24 – but the project is now £4billion over budget, nearly four years late, will run on Sundays and is still one year away from opening in full.

TfL revealed that in 20 days’ time, ‘Elizabeth line’ trains are initially set to run every five minutes from Monday to Saturday between Paddington in West London and Abbey Wood in South East London, from 6.30am until 11pm.

But the section will only have nine stops rather than ten because Bond Street is still not completed, so trains will go through without stopping at the station for now – and TfL said it is not expected open until ‘later this year’.

However, Mr Shapps claimed this afternoon that the decision to announce the opening date one day before local elections breaches pre-election rules and was an ‘unscrupulous headline grab’ by Mr Khan, who is chair of TfL.

The Cabinet Minister said: ‘This announcement is an act of breathtaking political cynicism by the Mayor, breaking election rules on such announcements in an effort to garner votes the day before the local elections in London. I am therefore immediately referring this breach to the Electoral Commission for investigation.

‘Londoners reading this unscrupulous headline grab might like to know that the Government has poured billions into Crossrail to solve delays clocked up on the Mayor’s watch, while propping up a transport system hobbled financially by his chronic incompetence.’

Around 30 minutes after issuing the statement, Mr Shapps posted a message on Twitter stating the Elizabeth line will open ‘thanks to £9billion of Government support’. He added that it will ‘transform the lives of Londoners for generations to come and deliver a £42billion boost to the whole UK economy’.

And a spokesman for Mr Khan then told MailOnline: ‘The Mayor is absolutely delighted that the Elizabeth line will be opening to passengers on May 24, transforming transport in the Capital and South East, and boosting the whole UK economy by £42billion each year. The announcement date for the Elizabeth line opening was made by Transport for London, and the Department for Transport were made aware well in advance.

‘It’s a shame that the Transport Secretary has decided to try and start a row rather than join the celebrations of the fact that this world-class new railway is about to open to millions of passengers.’

The capital’s new railway has suffered a series of delays having initially been planned to open in full – from Reading in Berkshire to Shenfield in Essex and Abbey Wood – in December 2018. It was set a budget of £14.8billion in 2010.

But the east-west project’s total cost is now estimated to have ballooned to £18.9billion, including £5.1billion from the Government – meaning it is now already three years and five months late and £4billion over budget.

The line has been hit by construction delays and difficulties installing complex signalling systems, and so will now initially operate in three sections, with the central part between Paddington and Abbey Wood using new tunnels.

Transport bosses hope the Queen – whom the line is named after – will be involved in the opening, although this is unconfirmed due to her recent mobility and health problems that have caused her to miss a string of events.

TfL will also be keen to avoid comparisons to the botched launch of London Heathrow Airport Terminal Five, which saw hundreds of flights cancelled and tens of thousands of bags delayed when it opened in March 2008.

Now, when the ‘Elizabeth line’ opens on May 24, it will operate as three separate railways – from Reading or Heathrow to Paddington; Paddington to Abbey Wood via Liverpool Street; and Liverpool Street to Shenfield.

The final milestone will be ‘no later than May 2023’, when the full timetable will allow passengers to travel without changing across the entire line from Reading or Heathrow to Shenfield or Abbey Wood, via central London.

For now, the line will operate 12 trains per hour between Paddington and Abbey Wood from Monday to Saturday, 6.30am to 11pm – but Bond Street station has not yet been completed and will not open until ‘later this year’.

How Crossrail will open in three stages by May 2023

The Elizabeth line will launch on May 24 with services on Monday to Saturday from Paddington to Abbey Wood.

Services from Reading and Heathrow to Paddington, and from Shenfield to Liverpool Street, will be rebranded from ‘TfL Rail’ to the ‘Elizabeth line’ and will continue to run on Monday to Sundays.

The earliest expected date for the next phase is ‘autumn 2022’. When this phase launches, services from Reading and Heathrow will operate through to Abbey Wood. Services from Shenfield will go through to Paddington.

Full timetable for travel from Reading or Heathrow to Shenfield or Abbey Wood without changing.

Work will continue in engineering hours and on Sundays to allow a series of testing and software updates in preparation for more intensive services from autumn.

But the Sunday closures will be lifted on June 5 to help people travelling in the capital during the Platinum Jubilee weekend celebrating the Queen’s milestone.

Elizabeth line trains have been running through the tunnels for tests since May 2021, and the stock for the line – the Class 345 Aventra – is already in service between Paddington and Reading, and Shenfield and Liverpool Street under the ‘TfL Rail’ brand.

These services will be rebranded from ‘TfL Rail’ to the ‘Elizabeth line’ from May 24, and they will continue to run seven days a week as at present.

Andy Byford, TfL’s commissioner, said today: ‘I am delighted that we can now announce a date for the opening of the Elizabeth line in May. We are using these final few weeks to continue to build up reliability on the railway and get the Elizabeth line ready to welcome customers.

‘The opening day is set to be a truly historic moment for the capital and the UK, and we look forward to showcasing a simply stunning addition to our network.’

Thousands of staff from TfL, Network Rail and other partner organisations took part in exercises earlier this year to test timetables and simulate scenarios such as evacuations from trains and stations.

He went on: ‘This is the most significant addition to our transport network in decades, and will revolutionise travel across the capital and the South East – as well as delivering a £42 billion boost to the whole UK economy and hundreds of thousands of new homes and jobs.

Green public transport is the future, and the opening of the Elizabeth line is a landmark moment for our capital and our whole country, particularly in this special Platinum Jubilee year.’

Crossrail’s sideways lifts that will carry passengers alongside escalators

The new Crossrail stations will feature four impressive sloping lifts. There are two ‘incline lifts’ at Liverpool Street and two at Farringdon that run alongside escalators, moving up and down sideways lift shafts.

They are innovative, but not a first for UK rail transport. This was the incline lift at Greenford Underground station on the Central line, installed in 2015.

Transport for London (TfL) said that sloping lifts are cheaper to install because they save the cost of excavating a lift shaft, can utilise existing escalator space and are 50 per cent more efficient than a standard lift as they only use half as much power to run.

He also said the injection into the UK economy was ‘really important at this difficult time’, adding: ‘It’s going to improve transport links, it’s also going to be another example of us supporting our city in its recovery.

‘The trains are brand new, the stations are step-free. They will give not just London’s economy, but our country’s economy, a massive economic boost.’

But Mr Khan refused to be drawn on whether the Queen would be involved in the opening of the line named after her.

‘I’m not going to go into what are plans are for the grand opening,’ he said. ‘What’s important though, is that we’re able to announce today that the Elizabeth line is going to open on May 24.’

TfL confirmed that the opening would happen on May 24, which is a Tuesday, ‘subject to final safety approvals’, and that it estimates Crossrail will add £42billion to the UK economy.

It also gave an example of a reduced journey time, with Paddington to Canary Wharf now taking only 17 minutes from May 24 – compared to 30 minutes when using the Underground at the moment.

‘The Elizabeth line will initially operate as three separate railways, with services from Reading, Heathrow and Shenfield connecting with the central tunnels from autumn this year.

‘In the coming weeks, Elizabeth line signage will continue to be uncovered across the network in preparation for the start of customer service.’

Services from Reading, Heathrow and Shenfield will connect with the central tunnels in autumn, when frequencies will be increased to 22 trains per hour in the peak between Paddington and Whitechapel.

Transport bosses are also making changes to 14 bus routes to improve links to Elizabeth line stations in East and South East London, which will take effect from May 14 to 21.

This includes the new route 304, which will operate between Manor Park and Custom House stations from May 21.

Nick Bowes, chief executive of the Centre for London think tank, told MailOnline today: ‘The Elizabeth Line’s opening in a few weeks is a major shot in the arm for the city after its toughest few years since the war.

‘Yes, it’s late, and yes, it’s over budget, but London is getting a magnificent piece of public transport infrastructure that will blow Londoners away and change the mental geography of east-west city travel forever.

‘The Elizabeth Line has been decades in the planning, 14 years in construction, and has brought huge supply chain benefits across the country, demonstrating how public transport investment in London doesn’t just boost the city but the whole UK.’