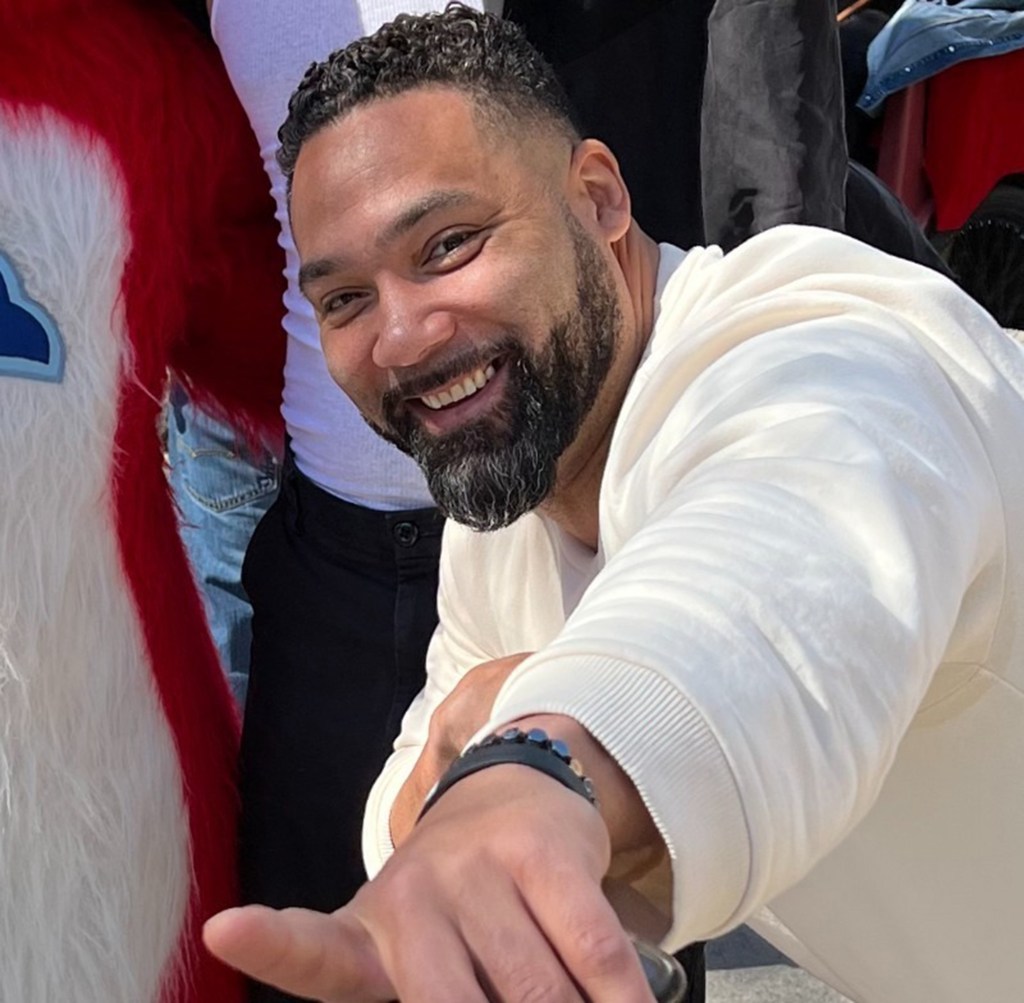 The CEO of a New York-based metaverse company has been accused of sexually assaulting two African-American subordinates, including a former NFL player who alleges she subjected him to weird advances and pressured him to engage in sexual activity with co-workers.

Teyo Johnson, a former tight end for the Oakland Raiders who also played college football at Stanford, alleges that Everyrealm CEO Janine Yorio presided over a toxic work environment in which she made lewd references about employees’ sex lives and racial slurs directed at black employees, including a threat to “trade” Johnson if he did not perform well in his position.

In a lawsuit filed in Manhattan federal court against Yorio and Everyrealm — whose backers include the Silicon Valley venture firm Andreessen Horowitz — Johnson also alleges that he was forced to participate in “sexually harassing games” in which coworkers and clients were encouraged to sleep with one another.

During a business trip to the South By Southwest (SXSW) event in Austin, Texas, in March, Johnson said that Yorio told him about a “sex-related game that she urged colleagues to play.” According to the lawsuit, “KYP,” which stands for “know your personnel,” and “KYC,” which stands for “know your client,” were “euphemisms for having sex or hooking up with co-workers and business partners.”

The lawsuit alleges that Yorio instructed Johnson that “the way to pay the game” was to “get bedded by a co-worker on a business trip.” She apparently then asked him if he would conduct any KYP. According to the lawsuit, Johnson was “taken aback” by Yorio’s proposition and respectfully informed her that he was “already pretty close with someone.”

The same evening, Johnson claimed Yorio was “testing the waters” with him after she visited his hotel room in Austin and “insinuated in no uncertain terms that she believed he would” cheat on his girlfriend “to participate in the company’s KYP game,” according to the lawsuit.

It is reported that Janine Yorio, the CEO of the metaverse startup Everyrealm, made regular comments about Johnson’s sexual life, including crude statements about his girlfriend’s menstrual cycle.

Johnson also claimed that Yorio made derogatory jokes about his girlfriend’s menstrual cycle and called him a “dumb black guy” and “the whitest black person.” Yorio is also accused of using the slurs “d-ck,” “huge swinging d-ck,” and “f–king d-ck” towards Johnson.

Johnson, whose position entailed monitoring celebrity accounts such as Hilton’s, “was shocked” that Kerr compelled him to listen to insulting comments and a sexually offensive moniker in order to perform his duties, according to the lawsuit.

Johnson was responsible for maintaining Everyrealm’s connections with celebrity endorsers and investors, including Paris Hilton.

Johnson alleges he was terminated for exposing a cryptocurrency-based “gambling scheme” employing non-fungible token (NFT) playing cards of professional soccer players. According to Johnson, the plan “included a cryptocurrency-based version of fantasy sports in which consumers purchased packs of NFTs that represented professional soccer playing cards.”

According to the lawsuit, “Users would enter cryptocurrencies into a pool and earn reward money if their NFT playing cards performed better than other players’ NFTs.” According to the filing, Johnson “reasonably believed” that the method “would violate multiple New York and federal statutes” because “randomizing the packs of cards… would constitute a game of chance and so be illegal.”

Johnson, whose sports connections include a “active commercial engagement” with former NBA star Yao Ming, claims that Yorio and her executive team thwarted his attempt to build a relationship between Everyrealm and the NFL in retaliation for his blowing the whistle on the crypto scheme.

According to court documents, once he communicated his concerns to an executive, the NFT project was canceled, and Yorio “turned on” Johnson, who eventually ended up in her “doghouse.”

When contacted by The Post, a representative of Everyrealm dismissed the charges as “false.”

Everyrealm, Yorio’s startup, has a number of celebrity investors and promoters, including Paris Hilton.

“As noted in our court filings, this employee was terminated for poor performance, expense account abuse, and falling asleep on the job,” a company spokeswoman said in a statement.

Everyrealm also said in a legal document that Johnson “publicly and frequently disparaged the mother of his child” and requested that a portion of his salary be paid in cash to prevent child support garnishment.

According to the corporation, it denied Johnson’s stated demand.

Gatsby Frimpong, an additional former Everyrealm employee, claims that Yorio refused him a promotion and forced him out of the company after he rejected her sexual advances.

“Johnson made various inappropriate comments in the workplace about other women in his life, hazed a junior female employee by disparaging her as ‘rookie’ and refusing to meet with her, and referred to [Everyrealm co-founder Julia] Schwartz as ‘that b—h’ and Mrs. Yorio as ‘that crazy b—h,'” according to the company’s filing.

Andreessen Horowitz provided Everyrealm, a “metaverse technology and infrastructure business,” with $20 million in venture finance. The Silicon Valley company declined to comment on the matter.

Seppinni responded to The Post’s request for comment by saying, “Janine Yorio and her enablers at Everyrealm’s statements reveal how terrified they are of the truth.”

Yorio is claimed to have instructed Frimpong at a business meeting that he needed to “wet the customer like a woman.”

In a lawsuit filed last week in Manhattan federal court, another former African-American employee makes identical allegations against Yorio. Gatsby Frimpong, who claims to have worked as a product manager at Google, Microsoft, Apple, and Cisco Systems, claims he was paid significantly less than a white engineering director at Everyrealm for comparable work, and that Yorio refused to promote him after he rebuffed her sexual advances.

During a meeting discussing engineering and product, Yorio allegedly told Frimpong that “it is important to get the consumer wet, exactly like he would with a lady.” According to the lawsuit, Yorio stated on another occasion that she and her husband, Jesse Yorio, “are only married in the metaverse.”

A representative of Everyrealm told The Post: “These charges are preposterous. This former employee (Frimpong) worked remotely, and Mrs. Yorio communicated with him only a few times via video calls, according to a representative of the company.

“We shall defend ourselves against his bogus claims. These cases are rife with bogus claims made by former employees seeking multimillion-dollar compensation, according to the company’s spokeswoman. Our organization is committed to fostering an inclusive and supportive environment, and we will continue to defend ourselves against these allegations.

Katherine Yost, 46, the former head of human resources at Everyrealm, has also sued the company for “discriminatory and illegal practices and acts,” including Yorio’s sexually suggestive statements regarding coworkers’ romantic relationships and sexual orientation.

Yost, a longtime high school acquaintance of Yorio, claims she confided in Yorio that she “suffers from alcohol use problem” in the hopes that “Ms. Yorio would be her ally and assist deflect attention from the fact that Ms. Yost does not drink during business parties,” according to the filing.

Nonetheless, this did not prevent Yorio from reportedly taunting Ms. Yost in front of staff by urging them at an event, “We need to bring Kathy SIX drinks!” Yorio was accused of utilizing “very personal and confidential information” to do so.

When contacted for a response to Yost’s charges, a representative for Everyrealm told The Post, “These are nothing more than unfounded allegations made by a disgruntled former employee aiming to undermine our firm.”

Kathy Yost, a high school acquaintance of Yorio, has also filed suit against Yorio and Everyrealm (as seen in the photo above, right). Yost was the director of human resources at Everyrealm (left).

Everyrealm is committed to fostering an inclusive and supportive environment, and we will continue to defend ourselves against these cases.

Everyrealm has initiated its own legal cases against all three plaintiffs in an effort to have their grievances arbitrated. Everyrealm has also accused the plaintiffs of seeking a “extortionate” $1.9 million payment.