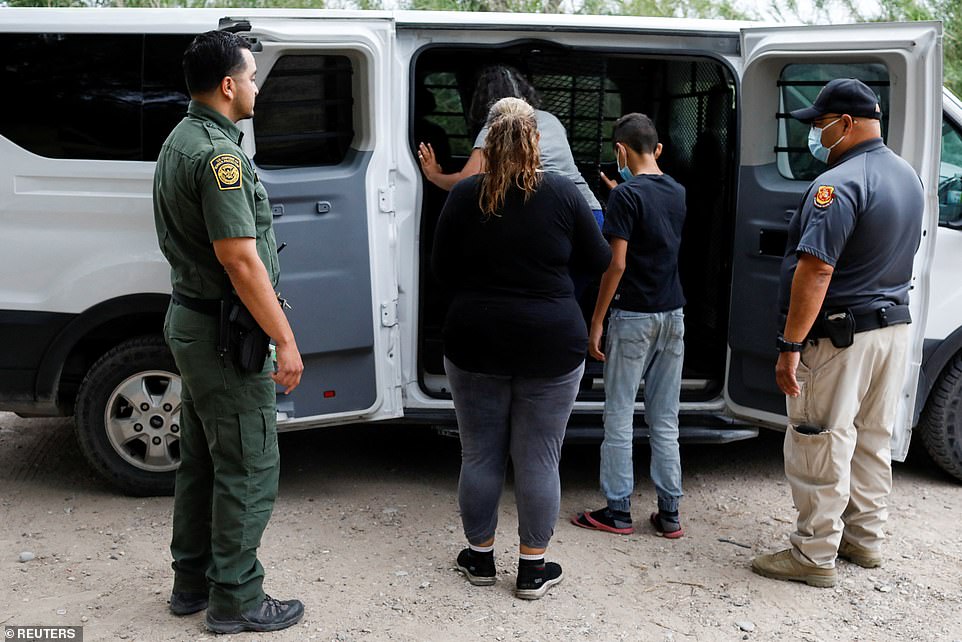 Hundreds of migrants were released from Customs and Border Protection (CBP) custody into the U.S. on Monday – the same day Title 42 was supposed to expire before a federal judge blocked the move by the Biden administration.

Busloads of single male migrants arrived at the Mission: Border Hope nonprofit in Eagle Pass, Texas on Monday, where they will receive shelter and food before they travel to their final destination within the U.S.

Executive Director of the non-profit Valeria Wheeler, 35, told DailyMail.com that they house migrants released from Border Patrol until they can transport them to the bus station or airport in San Antonio, Texas, which is about 2.5 hours away.

When asked how many migrants they see each day, Wheeler said: ‘500 – sometimes a little bit less. Yesterday we had 1,000, but it was a mistake. They left. We’ve helped the ones that really needed to stay, but it was so hot that they just left.’

The move to release hundreds of migrants from custody into the U.S. comes the same day that Title 42 was previously supposed to end, which would have given migrants an easier clear path to claim asylum.

Meanwhile, Republican Texas Governor Greg Abbott is sending a message to migrants trying to cross into the U.S. from Mexico that they will be met with force – making clear with a fleet of Humvees and armed National Guard soldiers that the state is still enforcing Title 42.

Authorities expected to see a massive influx of migration Monday, but so far the crossing pints in Eagle Pass, Texas are relatively quiet except for patrolling helicopters and fan boats on the Rio Grande River, as well as dozens of Border Patrol trucks and camouflage and camel-colored Army Humvees caravanning through the town and along the border.

Just five miles down the road from the river where hundreds of migrants cross each day, the non-profit Mission: Border Hope, which houses released migrants, received bus loads of single male migrants that were released by Border Patrol into the U.S. the same day Title 42 was meant to expire.

Wheeler said that migrants and their families need to arrange and pay for travel to their final destination within the U.S. ‘All of them already have tickets, flight tickets or bus tickets, to go out from San Antonio,’ she said of the people who are released from the non-profit facility.

‘We are not willing to create an issue in San Antonio,’ Wheeler added. ‘So we don’t send them if they don’t have travel arrangements done to go to their final destination.’

A gloomy, overcast and chilly winded mid-70s day may have deterred migrants from making the trek across the Rio Grande River with a stronger-than-usual current. But across the border, news is coming that migrants are being prevented from accessing the river.

Despite this, several National Guard soldiers in Eagle Pass told DailyMail.com that they are still expecting the surge previously predicted with the end of Title 42.

Conditions in the Rio Grande River on Monday are extremely dangerous with strong currents in the water, gusting winds and weather warnings of thunderstorms. Sources told a Daily Caller reporter at the border that three migrants drowned Monday morning around 7:00 a.m.

Migrants on the other side of the border insist that even though the policy isn’t being lifted, they still plan to cross the Rio Grande into the U.S. later in the day.

The pandemic-era policy was meant to end Monday, May 23, 2022 – but a federal court ruling in Louisiana on Friday halted the Biden administration’s move attempting to stop Title 42 from remaining in place after more than two years of enforcement.

Abbott, a Republican, will tour the border near the Camino Real International Bridge in Eagle Pass, Texas on Monday afternoon before a border security briefing and a press conference at City Hall.

Mexican authorities with drug sniffing German Shepherds patrolled the bank of the Rio Grande River on the Mexico side on Monday morning. And other armed forces stood with their backs to the river watching for signs of groups attempting to cross.

On Sunday, migrants from Colombia, Honduras, Guatemala, Cuba and Nicaragua continued to trickle over the southern border by way of the Rio Grande River in Eagle Pass The number of those crossing the border, however, is a much lower showing than in recent months at that particular crossing point.

A Texas National Guard soldier stationed in Eagle Pass since October told DailyMail.com Sunday that it’s ‘all hands on deck,’ claiming that those patrolling the border are still anticipating influxes of migration this week even though Title 42 is not ending.

Title 42 was enacted in March 2020 under then-President Donald Trump as a way to quell mass migration at the southern border at the onset of the coronavirus crisis. The pandemic-era policy, controlled by the Centers for Disease Control and Prevention (CDC), allows for instant expulsion of migrants without officials hearing asylum claims in the midst of a public health emergency.

All Border Patrol authority for dealing with illegal immigration falls under Title 8 – not Title 42.

The policy has so far stopped 1.7 million illegal immigrants since the start of the pandemic in March 2020. Humans Rights First found that of those expelled back to Mexico under the law, 10,200 of them – or 0.006 percent – have been kidnapped, raped, tortured or violently attacked.

When the CDC announced last month it was dropping Title 42 after more than two years, it was immediately met with backlash from Republicans, national security hawks and even some Democrats who claimed it would leave the border wide open for illegal immigration.

Many also argued that it didn’t make sense to lift Title 42 while the U.S. is still in an active declared state of emergency due to COVID-19.

udge Robert Summerhays of the Western District of Louisiana ruled Friday on a temporary stay for Biden’s end to Title 42 restrictions after a lawsuit was filed and signed on by two dozen Republican-led states.

The Trump appointee, granted a preliminary injunction on the Biden administration’s move to end the restriction in response to the lawsuit led by Arizona, Louisiana and Missouri.

The lawsuit argues the CDC is violating the Administrative Procedures Act because they did not provide a notice-and-comment period for the plan to lift Title 42. The law in question also bars moves that are deemed ‘arbitrary and capricious.’

The plaintiffs also claim the Biden administration failed to account for the added cost to the states – especially border states – of more migrants being allowed into the U.S.