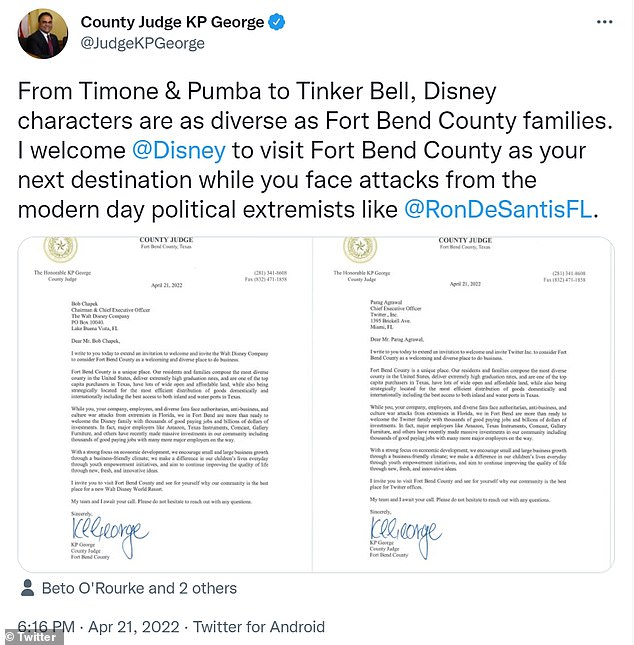 A Texas judge said Disney World would be ‘welcome’ if it chooses to leave its Florida home after Gov. Ron DeSantis stripped the firm of its land and tax privileges.

In a letter to Disney CEO Bob Chapek, Judge KP George said the corporation would be warmly accepted in Fort Bend County, southwest of Houston.

He described Fort Bend as a ‘welcoming and diverse place to do business’ in contrast to the ‘authoritarian, anti-business and culture war attacks’ from DeSantis.

Colorado’s governor also tried to lure in ‘the Mouse’ last week, as the global conglomerate continues to run into issues at the state it’s called home since the early 1960s, when planning for Disney World began.

Disney has remained quiet throughout the highly-publicized backlash, with some speculating that it’s mounting a legal response.

Experts say the company could put up a fight on First Amendment grounds if it argues that it was punished for exercising its constitutionally protected right to free speech.

Moving Disney World could prove to be a Sisyphean feat. The Orlando-area complex houses 25 hotels, four theme parks and two water parks across 43 sq mi, slightly less than the land area of San Francisco, which is about 47 sq mi.

The Reedy Creek Improvement District Act, enacted in 1967 just months after Disney’s death, allowed the corporation to govern its own theme park.

DeSantis retaliated against Disney’s opposition to his so-called ‘Don’t Say Gay’ bill, which bans classroom discussions on gender and sexuality through the third grade.

Judge George tweeted: ‘From Timone & Pumba to Tinker Bell, Disney characters are as diverse as Fort Bend County families. I welcome @Disney to visit Fort Bend County as your next destination while you face attacks from the modern day political extremists like @RonDeSantisFL.’

The judiciary member wrote the same letter to Twitter, which has also been criticized for its ‘uber-wokeness’ by the tech firm’s potential buyer Elon Musk.

George was born in the small, electricity-less South Indian village of Kakkodu, the Houston Chronicle reports. Until Kamala Harris assumed office as vice president, he was the most prominent Indian-American to hold an executive position in the US.

He also tried to get Tesla to move to his county, according to KIAH. The Musk-owned electric carmaker eventually moved to Austin late last year.

George is the top elected official in Fort Bend County, which includes the city of Sugar Land, about 19 mi southwest of Houston. A Democrat, he was elected in 2018 and is a former school board member.

The judge is not the only public official beckoning the entertainment giant. Last week, before the Florida House voted to revoke Disney’s special status, Gov. Jared Polis criticized Florida officials for their ‘authoritarian socialist attacks on the private sector.’

He tweeted: ‘In CO, we don’t meddle in affairs of companies like @Disney or @Twitter,’ Polis tweeted on Tuesday. ‘Hey @Disney we’re ready for Mountain Disneyland and @Twitter we’re ready for Twitter HQ2, whoever your owners are.’

‘We will grant Mickey and Minnie full asylum in Colorado,’ he later wrote.

Fort Bend has a population of 858,527, according to the Census Bureau.

Houston, with a population of 2.3 million people, sits partially inside of Fort Bend, but most of its population is in neighboring Harris County.

In its website, the county singles out engineering and construction firm Fluor, Frito Lay and Texas Instruments as major employers.

It also notes that 60 percent of its area is still undeveloped, leaving more than enough room for a theme park with big land requirements.

After Disney sparked controversy by donating to the Parental Rights in Education bill co-sponsors, CEO Chapek reversed course and criticized the legislation.

Disney also threatened to withdraw funding from the state unless the bill was dropped.

DeSantis hit back, telling Disney they are ‘marshalling your economic might to attack the parents of my state’.

He added: ‘We view that as a provocation, and we’re going to fight back against that.’

Disney could use its deep pockets to mount a huge lawsuit against the state on First Amendment grounds, legal experts say.

In the landmark Citizens United case in 2010, the Supreme Court held that corporate free speech – in that case, donations to political campaigns – could not be restricted by the government.

‘Disney obviously has no right to have a business improvement district, but to take away something like that based on speech, that strikes me as highly likely to be unconstitutional,’ Hofstra University law professor Daniel Greenwood told the Tampa Bay Times.

Adam Wrinkler, a UCLA professor who’s written a book on corporate civil rights, said he expects Disney to bring up free speech if it chooses to go to court.

‘The Supreme Court has said the government cannot take special benefits away for improper reasons,’ he said.

DeSantis spokeswoman Christina Pushaw dismissed the idea that Disney could argue that its free speech has been violated.

‘The assertion that a single corporation has a First Amendment right to its own autonomous government is simply absurd,’ she told the Tampa Bay Times in a statement.

‘Gov. DeSantis has consistently supported a more level playing field for all businesses in Florida. It is not “retaliatory” to pass legislation that gets rid of carve-outs and promotes a fairer environment for all companies to do business.’

The Reedy Creek district allows Disney to tax itself and oversee its own building codes, issue its own permits, collect its own trash and manage its own emergency services.

Projects could become longer and more expensive for the theme park if it has to go through regular, run-of-the-mill bureaucracy to get things done.

‘They will now have to go and ask permission. That in itself, I think, that’s going to cost more money, more time, more resources,’ said Aubrey Jewett, a political science professor at the nearby University of Central Florida, in an interview with the Washington Post.

The district is governed a Board of Supervisors that is selected by its 19 landowners, the biggest and most influential of them being Disney World.

The district has the authority to tax the land, and use the revenue to provide essential public services and operate and maintain all public roads and bridges.

Such private governments aren’t uncommon in Florida, which has more than 600 community development districts that manage and pay for infrastructure in new communities.

‘Might that be passed along in increased ticket price? Maybe,’ she added. ‘Disney has really been aggressive in raising prices across the years. In my way of thinking, they don’t need much more of a nudge to raise them again.’

Florida’s Orange and Osceola counties may also end up saddled with $1 billion of debt currently owed by Walt Disney World.

The corporation also governs the land and foots the bill for everything from building new roads to maintaining power lines. Those costs could now shift to the taxpayers in the counties.

The move could have huge tax implications for Disney, but there is scope for the district to be reestablished – leaving an avenue to renegotiate its future. The bill will also impact a handful of other similar districts by June 2023, with voting rights groups today suing the state over congressional map changes.

Voting rights groups claim the Reedy Creek abolition will reduce black representation and benefit Republicans. They staged a sit-in on the House floor, prayed and sang ‘We Shall Overcome’ in protest.

Joe Biden slammed ‘ugly’ GOP lawmakers for targeting Disney and claiming it has been taken over by the ‘far right’.

But DeSantis and his fellow Republicans lashed out at the Orlando resort – defending the law – before moving to strip it of its special privileges.

Regardless of the tug-of-war between Disney and Florida, the logistics of moving a massive theme park out of the state make it a virtual impossibility.

Walt Disney World sits on top of 43 sq mi of land, according to Florida Today. It’s much bigger than its California sister park Disneyland, which is only about 500 acres, or less than 1 sq mi.

There are about 50 rides throughout the park that have been built out over decades. Only seven of them are full-fledged rollercoasters.

The Reedy Creek Improvement District will now be abolished in June 2023.

Issuing support for the measure last week, DeSantis said in a fundraising email last Wednesday: ‘Disney and other woke corporations won’t get away with peddling their unchecked pressure campaigns any longer.

‘If we want to keep the Democrat machine and their corporate lapdogs accountable, we have to stand together now.’

Disney has not yet commented on the move and could launch a legal appeal.