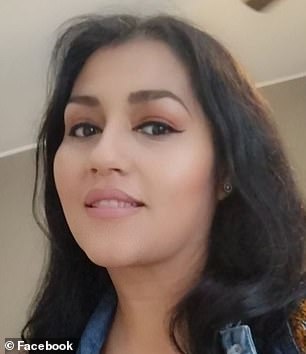 Officials have identified the mother and two children who were among the five persons gunned down in a rural Texas hamlet on Thursday.

Monica Delgado, 38, the suspect’s partner, along with her children Miguel Avila, 15, and Natallie Avila, 14, as well as Lorena Aviles, 47, and Natalie Aviles, 20, were reportedly murdered in a private neighborhood.

Nicolas Hernandez-Jaimes, 35, was arrested on Friday after he returned fire when police arrived at his residence in McGregor, Texas.

He is charged with felony aggravated assault with a deadly weapon, and further charges are pending, according to a statement by state Public Safety Department Sergeant Ryan Howard.

The shooting occurred at approximately 8:00 a.m. in McGregor, a city in East Texas just outside of Waco, in response to a ‘domestic disturbance’

According to state representative Charles ‘Doc’ Anderson, the Aviles were neighbors of the mother and children who were murdered and had gone to the residence after hearing shooting.

On Friday, 35-year-old Nicolas Hernandez-Jaimes was arrested and charged with felony aggravated assault with a deadly weapon, with further charges pending.

The two children of Monica Delgado, Miguel Avila, 15, and Natallie Avila, 14, were also murdered. According to authorities, the tragic shooting began with a domestic disturbance call.

Natalie Aviles graduated from McGregor High School in 2020, according to Lenamon.

Ashley Sanchez, an Aviles family member, posted on Facebook that she was “extremely heartbroken” and was in “shock and disbelief” over the tragic situation.

They did not deserve for this to occur, and I will never comprehend why. Two individuals who loved God, their families, and their friends.

Natalie was a gorgeous, full-of-life young woman who aspired to become a doctor, and she was always smiling. Lori was a lovely and remarkable woman who had accomplished much in her life and was excellent at loving and caring for others, especially at the hospital where she worked.

“I already miss both of them so terribly. Life will never be the same.

Lorena, 47, and Natalie, 20, were allegedly murdered in McGregor by Delgado’s partner.

Ashley Sanchez, a family member, posted about the shooting on Facebook. “Our family has lost two precious souls today,” Aunt Lori Aviles with my cousin Natalie Aviles. I am still in shock and astonishment. They did not deserve to be treated this way, and I will never comprehend why.

Thursday, law enforcement authorities gather in front of a residence in McGregor, Texas, from which five bodies were recovered.

A tarp is used by law enforcement to obscure the view as one of five bodies is removed from a residence in McGregor, Texas.

Picture of Monica Delgado Aviles and her husband Nicolas Jaimes-Hernandez from his Facebook profile. On Friday, he was apprehended after returning fire when police arrived at the McGregor, Texas residence and was charged with aggravated assault. Felony aggravated assault with a dangerous weapon is one of the outstanding allegations against him.

On Thursday, police reportedly shot and sent Jaimes-Hernandez to the hospital. The charges against him were made public on Friday.

Howard, with DPS, stated during the Thursday afternoon news conference, “This is unfortunate information to really have to release, and I stand before you today with my thoughts, prayers, and wishes for McGregor’s successful healing.”

Currently, the Texas Department of Public Safety and Texas Rangers are conducting investigations.

Unknown is the reason behind the carnage.

Following reports of the citywide commotion, the school system was temporarily closed. Thursday from soon after 8 a.m. until noon, schools were placed in a’secure setting’

Lenamon described the shooting as a “horrific catastrophe” that “took place during a marital dispute.”

Charles ‘Doc’ Anderson, a state representative, stated, “McGregor is a tranquil, beautiful town, and something like this never occurs.”

Top law enforcement authorities told local news outlets that they responded to a ‘domestic disturbance’ in the 900 block of Monroe Street at 8 a.m.

In McGregor, Texas, evidence is gathered near a residence involved in a shooting that claimed five lives.