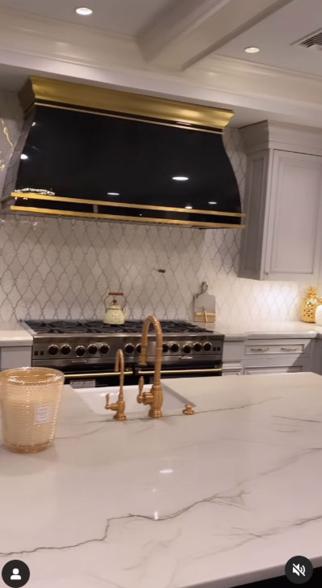 Teresa Giudice and Joe Gorga may not be on speaking terms, but fans of “The Real Housewives of New Jersey” believe the reality star continues to draw inspiration from her younger brother.

Giudice, 50, posted a photo of her newly renovated kitchen on Instagram on Friday, and her admirers could not help but note its remarkable resemblance to Joe and Melissa’s new home.

“Isn’t this the kitchen of Melissa and Joe? If not, they appear identical,” one user said, while another added, “It’s lovely, but have you seen Melissa’s?!?”

However, a third follower speculated that it may be the other way around, saying, “Omg, so Melissa cloned your kitchen?! Omg !”

The claims are made in the midst of the brothers’ months-long animosity, which stems from their violent confrontation in the Season 13 finale. During the dramatic outburst, Giudice apparently accused Melissa of having an affair, which the Gorgas adamantly denied.

The couple ultimately opted to forego the wedding of the “Namaste B$tches” podcast host to Luis “Louis” Ruelas.

Uncertain as to how long Giudice’s restoration has been in progress, the Gorgas spent over a year building their dream home before moving in last month.

Fans of Bravo liked the Envy founder’s kitchen, but had conflicting feelings about her other design decisions.

The conflict between the siblings and their spouses has lasted for months.

Melissa was ridiculed in her own comments section after posting a photo of the couple’s stunning foyer, which featured three black fabric chandeliers with studs.

One user joked, “It’s giving babadook in Valentino rock stud shoes,” while another added, “She’d best get her patronus ready, dementors are coming.”