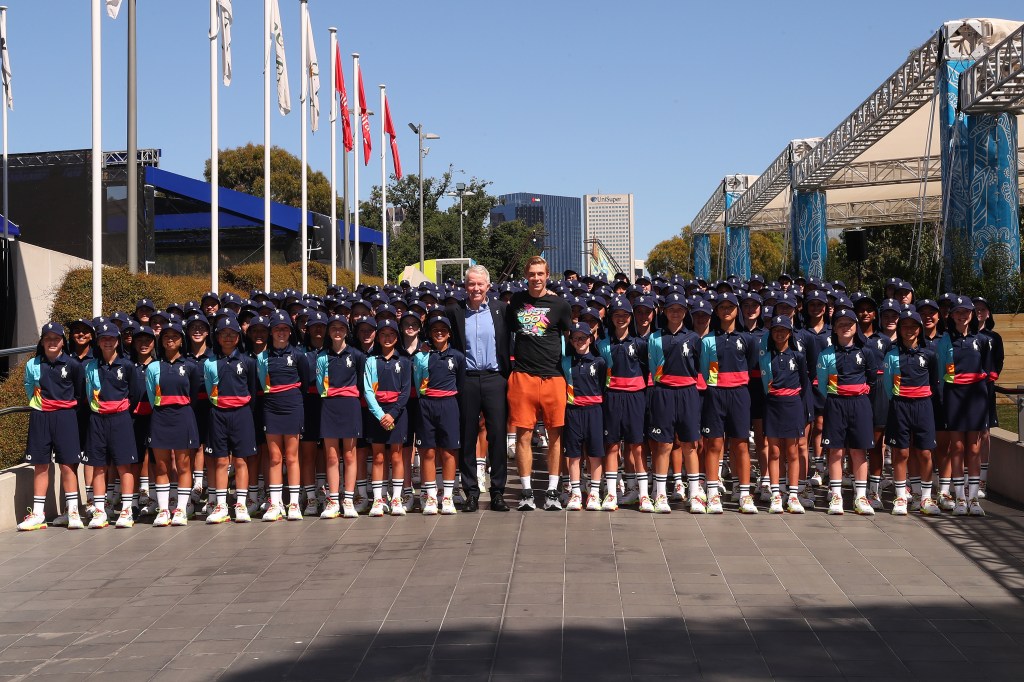 Earlier this week, controversy arose at the Australian Open when spectators realized that the ballkids are not being compensated for their efforts.

Approximately 2,500 children apply to be ballkids each year, but less than one in five are accepted.

Those who make the cut work under stringent conditions and in Melbourne’s sweltering January climate.

Social media users were shocked to learn that instead of receiving monetary recompense, the children are given free merchandise and work for the love of the game and the associated experience.

However, calls continue to build for the Australian Open to open its wide wallet and compensate the youngsters who are occasionally subjected to the ire of irate players.

Craig Tiley, CEO of Tennis Australia, meets Canadian Denis Shapavalov and the ballkids for the 2023 Australian Open on January 8, 2023.

Before the tournament began, it was announced that the prize pool for the world’s finest players would be the largest ever seen in Australia.

In contrast to the Australian Open, ballkids at the US Open are paid $15 per hour, whereas at Wimbledon they receive a flat weekly wage of $242.

Journalist Justin Smith led the push for reform and for the Australian Open to revert to 2008, before they were categorized as volunteers, when they were paid.

“Are we in a Charles Dickens novel or what?” Come on, now. Pay the children, said Smith on Channel 7

Broadcaster Amanda Rose added, “I believe it teaches children from an early age that experience is more valuable than money. Particularly for ladies, I believe it’s crucial to assert, “No, we’re worth this money… Not a charitable event.

“You do not want them to apply for a job in their twenties just to be told that it is unpaid and for experience. So they should be compensated.”

The contentious problem was brought to light on Reddit, where people were divided on the subject, with many saying it amounted to exploitation.

One person wondered, “How is this not child exploitation?”

Another person stated, “It is not unreasonable to suggest that the ballkids be compensated for their time.”

It’s the equivalent of artists being compensated for exposure.

However, not everyone views it as such a major issue.

In response to the thread, one Reddit member stated, “Volunteering can be problematic when there is implicit pressure or coercion to perform labor voluntarily, resulting in unshared profit for the organization.”

There is no implied compulsion on ballplayers to perform unpaid labor.

Nobody has to be a ballboy at the Australian Open for career or exposure reasons.

“Children jump at the chance because it’s a fantastic opportunity – there’s no exploitation going on here, so please move along.”

Another user stated, “The children are tennis fanatics and adore the experience.”

The material that the kids receive was also a focal point in a number of reactions, with one person stating, “Calling this child exploitation is an insult to the real exploitation that occurs overseas, because they get to keep a lot of cool stuff given to them by Australian Open organizers.”

Early on in this year’s Open, ballkids have been the center of attention, with Rafael Nadal losing a racquet to a ballkid who erroneously took the one he was using to be restrung.

“Please return the racquet to me, ball boy,” Nadal replied.