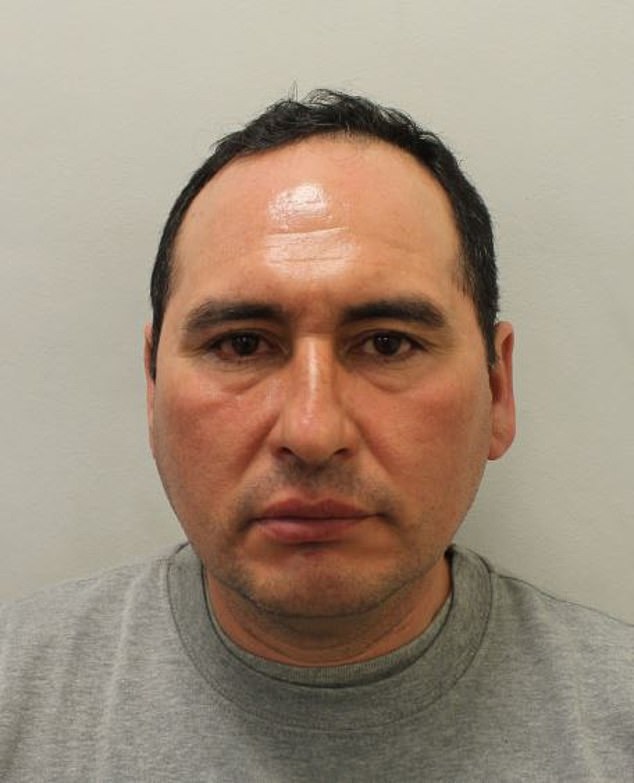 An HIV-positive tenant who stabbed his landlords to death in ‘a bloodbath’ in lockdown over fears Covid-19 would kill him has been jailed for at least 33 years.

Briceno Garcia claimed he was suffering from paranoid delusions and believed the Bolivian couple were trying to kill him at their shared five-bedroom maisonette in Stockwell, southwest London.

He was HIV positive and thought contracting Covid 19 would end his life.

Briceno Garcia was sentenced to life imprisonment with a minimum term of 33 years after being found guilty of two charges of murder by an Old Bailey jury.

Assisted a Spanish interpreter, he showed no emotion as he was sentenced.

He had admitted two lesser charges of manslaughter claiming his mental condition meant he was not in control of his actions but the jury found he knew what he was doing when he killed the couple.

Reading the victim impact statement of their daughter Laura Aguilera, prosecutor Tom Little told the court: ‘My parents gave up a comfortable life in South America to find their children and grandchildren a better life.

They were not only wonderful parents, grandparents and friends, but many members of the church looked up to them.’

Ms Calvi and Mr Daza had ‘an infectious humour that would make everyone feel better.’

‘This is why I find it so difficult to accept how their life was taken in such a cruel way,’ said Ms Aguilera.

‘Grief and pain overwhelm acceptance of their absence.’

Ms Aguilera also criticised him for ‘not understanding the damage he has done to the entire Bolivian community in London.’

The Recorder of London, Judge Mark Lucraft told him: ‘You launched a brutal attack, on Edgar and then on Sonia..

He added: ‘I am entirely satisfied that there is nothing that affected you at the time [of the murders].

‘You are a difficult person and at times have shown your unwillingness to engage in the process of this case.

s Butron Calvi and Mr Aguilera Daza had rented the property since 2015 and sub-let the four remaining bedrooms to other tenants including Briceno Garcia.

‘Witnesses describe that the defendant had become concerned, if not paranoid about the risk that Covid was going to pose and was concerned about that in this property,’ he said.

‘That in itself you may think is understandable.

‘But it’s quite another thing to react to the risks which Covid posed and any arguments that flow from it with the use of a knife.’

Flatmate Maria Bobadilla last saw Ms Butron Calvi alive at noon on April 1 the landlord told her: ‘I don’t know what the matter is with Daniel, he’s constantly in a bad mood.’

Ms Bobadilla went to her room and was watching a film with her partner Galo Perez Brit when she heard shouting.

‘She looked down the stairs and saw the defendant and Edgar,’ Mr Little said.

‘They both hit the wall in the corridor on the ground floor leading to the front door.

‘The defendant had his left arm around Edgar’s neck.

‘Edgar’s back was against the wall and the defendant pushed off the wall and, while still holding Edgar with his left arm, he stabbed repeatedly at Edgar’s stomach area with his right hand.

‘Maria Bobadilla could not see clearly what it was but described it as a white long object.

‘But as the fatal injuries to Edgar reveal, and as we will see the presence of a knife in the defendant’s bedroom, it must have been a knife.

Ms Bobadilla went back into her room and locked the door.

Her partner, minutes later, suggested she leave the room and pretend to go to the bathroom to see if the fight had stopped.

‘Maria Bobadilla looked out and saw the defendant at the door of his bedroom,’ Mr Little said.

‘He was holding his telephone to his ear. His face was completely red.

‘By this stage he had attacked both Edgar and Sonia and they had been left dying downstairs.’

Briceno Garcia shouted: ‘Go back into your room and lock the door. I’m calling the police.’

Mr Little said: ‘Maria Bobadilla did as she was told and did not hear or see anything further until the police arrived.’

The other occupants, Alejandro Deleg, Esguin Riofrio and Jose Chancusi, were in the flat in their rooms the court heard.

Briceno Garcia called police six times, asking them to come to the flat.

He opened the door to two police officers, PC Rose and PC Glen.

‘He was holding a mobile telephone in his hand and he immediately lifted both hands up,’ Mr Little said.

‘PC Rose could see that there was some blood coming from both of his hands.

‘What police found at the property can only properly be regarded as a bloodbath.’

The officers entered the flat and found Mr Aguilera Daza ‘surrounded by a pool of blood’, the prosecutor said.

Ms Butron Calvi was found lying in the kitchen.

‘She was face down and had a knife clenched in her hand. She was also surrounded by a large pool of blood.’

Police and paramedics tried to resuscitate them both but life was pronounced extinct for Mr Aguilera Daza at 4:30pm and for Ms Butron Calvi at 4.35pm.

The killer told psychiatrists that his flatmates were ‘psychologically and physically violent to him’.

He also said the landlords were trying to kill him and that he was hearing voices.

His defence barrister Clare Wade said Garcia suffers from HIV, and would have been particularly anxious about catching Covid because he needed ‘to keep himself free of the disease.’

Briceno Garcia, of Dorset Road, Stockwell, southwest London, was sentenced to life imprisonment for a minimum term of 33 years for the murder of Sonia Butron Calvi, and Edgar Aguilera Daza.