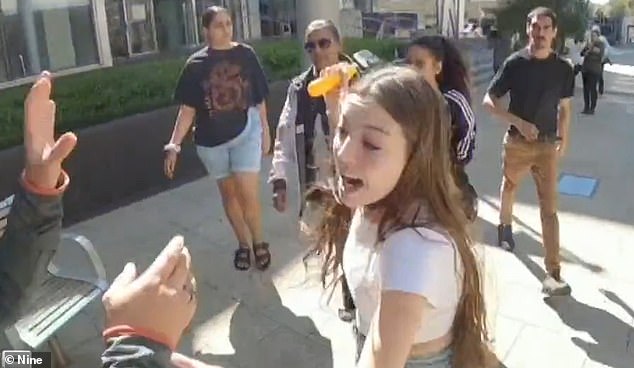 After receiving a life sentence in prison, a teenage murderer who fatally stabbed a perfect stranger at a party sparked irate protests outside the court.

Kingston Trey Coomer, 19, was informed of his fate in the Supreme Court of Western Australia on Tuesday.

Outraged supporters yelled at photographers and cameramen, with one female yelling at them to “get the f*** away.”

Chikayne Heslip, 17, lost his life in December 2020 after being hunted down and assaulted by a mob of young people during a party in Waikiki, south of Perth.

As Chikayne lay helpless on the ground, Coomer allegedly stabbed him 32 times with a knife in what Justice Michael Corboy called a “senseless and explicable act of violence.”

Coomer was found guilty of his murder earlier this year by a jury in less than one hour.

Partygoers captured the horrific picture on camera, and the brick wall covered with blood was eventually shared on social media.

In one video given to the court, a panicked witness can be heard yelling, “Call the f****** ambulance.”

Another depicts first responders arriving at the site and questioning what occurred.

A girl informs them, “I don’t know, but I just saw a child with a complete bloodied face.”

The mother of Chikayne testified in court as well, recalling her son as a gentle giant with a golden heart who was cherished as a brother for life by his friends.

She sent a stern warning to his murderer in her victim impact statement as well.

She added, “The loss of a kid is unlike any other.”

He had his whole life in front of him and was a live, breathing person.

My family is torn apart, and I’m unsure of how to help us go on.

“We will never forgive you,” the family said.

Coomer will serve at least 19 years in prison.

The court also heard about Coomer’s troubled background and how, after entering state custody at age 15 as a result of his parents’ usage of the narcotic ice, he resorted to cannabis.

Justice Corboy, however, said that the community needed to be “adequately safeguarded” since Coomer had a determined determination to murder his victim.

He stated, “You didn’t know Mr. Heslip, there was no justification for the assault, and your brutality was very unnecessary.”

“Violence at public social events is all too common, usually including young mans acting in concert in an exceedingly aggressive manner.”

Violence is often unprovoked or an overwhelming response to a little provocation.

The community has a right to anticipate that those who carry knives and stab their victims will be punished in a fashion that discourages others from arming themselves and engaging in violent conflict.

Four further men who were accused of being involved in Chikayne’s killing have already received sentences.