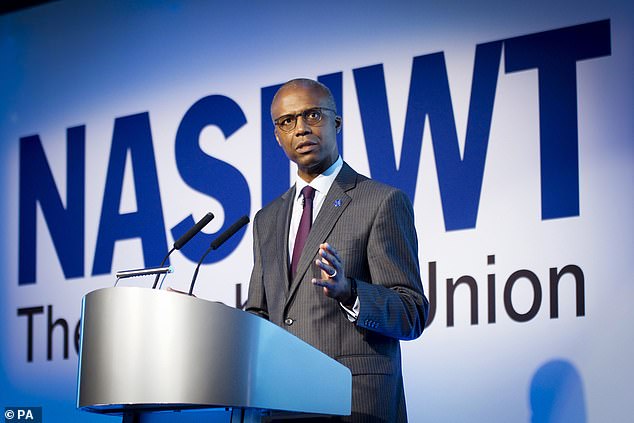 She said: ‘Many of us have been told to download apps such as ClassDojo [an educational tech app] to our phones, and parents and students have got into the habit of firing off emails 24/7, with the banal, bizarre, and sometimes, more worryingly, aggressive and accusatory messages.

‘They seem to feel they can assess us 24/7. Working hours and parameters have been blurred since the pandemic.’

Member Kat Lord Watson, who worked in a private school in Scotland during the pandemic, said: ‘the knowledge that the parents were watching you and reading you on their WhatsApp groups was also quite incredible’.

Teachers have revealed the strain of the pandemic on their mental health and how parents now feel they should have access to them 24 hours a day (pictured: Patrick Roach, NASUWT general secretary)

In a study of the impact of parental complaints on teachers and school leaders that she conducted, one teacher said: ‘The direct line to staff has become much more rapid and the willingness to just jump on to the phone and make a complaint is definitely much more there than it ever has been.’

Another said: ‘Over the past nine months to a year, is an increase in the – I’m trying to think of the right word – but complaints that you just think, “really?”

‘That’s not something that you could actually ever expect of a school. It’s not reasonable to expect a school to be able to support you in that.’